Christendom College Students Raise Over $10,000 in Walk for Life 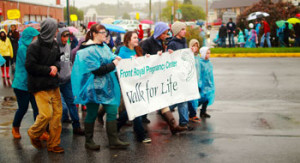 Stormy rains and chilling temperatures did not prevent the students of Christendom College from supporting their local pregnancy center’s annual Walk for Life last weekend, with Christendom becoming the leading sponsor in the area with over $10,000 raised by the student body.

Christendom’s students, true to their staunch pro-life reputation, beat the records of last year’s walk, not only raising more money but also coming out in greater numbers than before. Responsible for $10,535 of the funds raised for the Front Royal Pregnancy Center, Christendom students made up 77 of the 300 registered walkers, while faculty, staff, and alumni of the college filled up many more spots.

Christendom’s sophomore class alone almost matched the total funds raised last year by the entire student body, contributing over $6000 as a class. Faculty and staff members also raised $5290 with the help of their families, making current members of the college responsible for one-sixth of the donations accumulated for the pregnancy center through this year’s walk. This combined total earned Christendom College the title of “Gold Sponsor” and made them the top donor for 2015. Sophomore Maria McFadden was one of the Walk’s coordinators this year and was the driving force behind her class’ generous involvement.

“I was so amazed and proud of my school when, early on a Saturday morning, I arrived at the walk site to see many of my fellow classmates putting up tents in the pouring rain. That’s the kind of dedication you can be sure of from students at Christendom,” said McFadden.

Current board member for the Front Royal Pregnancy Center, and Christendom alumna, Mary Brand (’98) expressed how thankful she was to have students taking initiative and choosing to participate, selflessly setting a powerful example for the community through their volunteering.

“It was so inspiring to see so many Christendom students come to the Walk, even on this cold and dreary day. There were at least thirty of them, including the entire women’s volleyball team, who showed up to help out with setting up tents and decorating in the rain at 7:30 in the morning. They were cheerful and exuded joy. It was so refreshing and encouraging to see young people like this — we are so appreciative of everything the Christendom College community does to help support our Center,” said Brand.

The pregnancy center, founded by alumni of Christendom College in 1991, continues to be a light of encouragement in the area, and the extended Christendom family continues to show their support for helping women in their local community. Those associated with the college helped raise over $21,000 of the walk’s total profits, confirming Christendom College’s powerful presence as a consistent leader in the pro-life community.