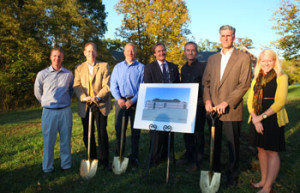 Christendom College ceremonially broke ground on a new women’s residence hall on Saturday, October 10. The first new residence hall on Christendom’s Front Royal, Va., campus in fifteen years, St. Clare Hall will sit parallel to St. Catherine of Siena Hall once completed, and is expected to be ready for occupancy by next fall.

“It’s been a long time since the campus has seen a development of this size and value to the student body. By incorporating best practices in the construction of the hall, this building will bring both much-needed expansion and a better living space to the women of campus. It’s an exciting time not just for the women of campus, but for the college as a whole,” said vice president for operations and facility planning Mike Foeckler.

While many colleges are finding it difficult to find enough students to fill their beds and have seen their enrollments shrinking, Christendom College has seen a 21% growth in enrollment since 2012.  Due to this tremendous growth, the college needs to expand its housing capacity to accommodate future growth.

St. Clare’s will be longer and wider than St. Catherine’s once it is completed, housing ninety-six beds for the women of campus. Along with incorporating best practices, the residence hall will feature large suites, complete with living room spaces for occupants.

In addition to bringing more living space to campus, St. Clare’s will also form a quad between the women’s residence halls. Renovations will be made on the back of St. Edmund Campion Hall in the process, unifying the three residence halls and increasing the opportunities for community life and social interaction on campus. 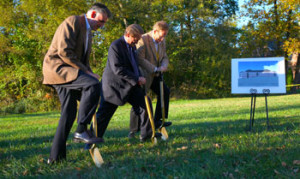 The construction of the new residence hall is a huge step forward in Christendom’s continued efforts to assist students in unlocking their full potential as students, a step that director of residence life Amanda Graf believes will make Christendom an even greater college as a result.

“Having a new residence hall will support the students in their pursuit of a liberal arts education while they’re here at Christendom. Living and recreating comfortably is an important part of their time here, helping to form them both as students and as individuals. We’re excited to be offering new and better options for their future growth as students on this campus,” said Graf.

The last time the college built a residence hall was in 2000, when St. Catherine of Siena Hall was constructed. Since then, some houses located to the east of campus have been purchased and utilized as residence halls, thus forming a major part of the college’s east campus.

The building of St. Clare Hall comes on the completion of two other recent building projects on campus: the admissions office suite and the two-story Madonna Hall office building.

The college will be working with Petrine Construction and architects O’Brien & Keane on this project, and will be designing it to meet best practices in residential living.