Christendom Scores Comeback Goal Against Penn State for the Win 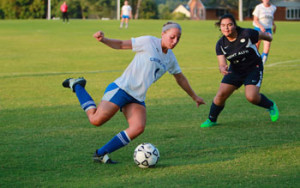 The Lady Crusaders soccer team continued their domination on the soccer field on Monday, October 12, claiming victory in a tough game at Penn State Mont Alto.  Rebounding after a tough loss against Washington Adventist last week – their first loss of the season – the Crusaders pulled through with a 3-2 win.

In the first half, the Lady Crusaders launched into the game on the attack, executing several shots on goal. They finally placed one in the net off of a shot from Bryn Burgess, the leading goal-scorer for Christendom this season. Before the end of the half, the Penn State forwards beat the Christendom defenders and scored their first goal, tying the game at 1-1.

As the second half began, the Lady Crusaders continued to attack the goal, but were unable to penetrate the Penn State defense. Penn State got the edge on the Crusaders later, scoring their second goal to take a 2-1 lead.

Their win on Monday puts the Lady Crusaders at fourth overall in the USCAA national standings, with an overall record of 6-1-1.