Crusaders Crush Opponents – On Their Way to Historic Season 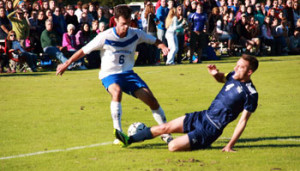 Christendom’s soccer teams are ending their seasons in spectacular fashion, with both the men and women’s teams scoring momentous victories on the field on Thursday night. With the victories, both teams secured their spots as two of the best teams in the nation, according to the USCAA rankings.

Playing their penultimate game in Maryland on October 15, the men’s soccer team took on Washington Adventist University (WAU), looking for their first victory ever against the tough opponent. Within minutes of the start of the first half, striker James Miller kicked in the first goal of the game — his sixteenth of the year, tying him for third-best amount of goals nationally. With a solid defensive performance and some impressive saves by keeper Richard Blank, the Crusaders headed into halftime with a 1-0 lead.

At halftime, senior captain Pat Audino reminded the team of the opportunity at hand: to be the first to beat WAU.

While the Shock would tie the game twenty minutes into the second half, Christendom took the lead back only minutes later thanks to an unassisted goal from Stephen Foeckler, never to give it up again. Foeckler would score again only minutes later, with freshman sensation Peter Day scoring the final goal with six minutes left. The Crusaders wrapped the game up with a final tally of 4-1 — an historic win that places them in fifth-place nationally, with one game left in the season.

The Lady Crusader offense, on the other hand, turned out to be relentless, taking a 9-0 lead before the end of thirty minutes. After ninety minutes of near-constant possession, the Lady Crusaders ended the game with a crushing 18-1 victory, kicking thirty-six shots over the course of the game.

With the victory, the Lady Crusaders finished their season as the fourth-best team in the nation, with a 7-2-1 record.

The Crusaders will play the final game of their season against number-one ranked WVU Tech on October 17. For more information, please visit christendomathletics.com.