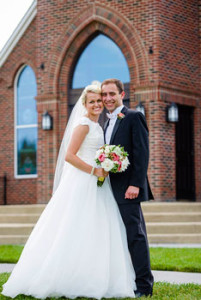 Christendom’s faithful, Catholic education has been instrumental in building strong marriages between alumni over the past 37 years, with the four-hundredth alumnus-to-alumna marriage occurring last month. The college’s strong stance on traditional marriage earned the acclaim of The Cardinal Newman Society over the past week, as they highlighted the college for fostering faithful unions within a culture hostile to marriage.

In interviews with vice president for enrollment Tom McFadden and alumni couple Jacob and Jessica Meza, The Cardinal Newman Society emphasized Christendom’s imparting of a faithful Catholic worldview in the classroom and campus life as instrumental in forming a culture conducive to good marriages and a strong family life.

“[Christendom has] a good moral climate that allows for men and women to get to know each other as individuals, and thus better sets them on the path to a good marriage, if that is what they feel God is calling them to,” said McFadden. “Christendom’s education on the beauty of the truths of the Catholic Church, which include her teachings on love, family and marriage, go a long way in aiding our alumni to succeed in their vocations to married life and to help them aid other families along the way.”

During their years at the college, students encounter an education set on imparting a Catholic worldview in every aspect of the education, from the core curriculum up through a student’s major.

Students learn Pope St. John Paul II’s Theology of the Body in one course, while they learn about Catholic doctrine and moral theology in other courses as well. As students complete each course, they gain a greater knowledge of the principles of the faith, especially pertaining to the Church’s teachings on sexuality, marriage, and family.

Such classes were what brought Jacob and Jessica Meza together during their time at Christendom. After meeting in Philosophy 101 class freshman year, they began a friendship that eventually led to four children and their tenth wedding anniversary this past month.

“If a student desires to live a faith-filled life after college, I think it is important to consider how the college they plan on attending will give them the skills to do so. If marriage is a possibility, then what better place to find a partner in the faith than at a Catholic college?” said the Mezas.

While the classroom gave the Mezas, and countless other alumni, the knowledge necessary to understand the value of marriage and family, the campus lifestyle, with its emphasis on virtuous living, helped to impart the value of strong friendships and chastity as well.

Christendom features single-sex residence halls, with visitation policies geared towards the promotion of chastity. Countless other events on campus promote this virtue, while others show the value of responsible drinking, dressing modestly, and more. Each of these student life policies centers on fostering true friendships at Christendom, according to the Mezas, resulting in a campus that prepares people to be better friends, spouses and parents.

“The culture at Christendom truly fostered a lifestyle that was grounded in the faith. So many of the ways that we live out our faith now were ways that we lived it during our college years,” said the Mezas. “You quickly learn the value of community life and the skills required to make that successful. You learn how to pray, work and live together with the goal of getting closer to Our Lord. Ultimately, those skills are the ones needed for a successful marriage as well.”

The importance of strong, traditional families has been brought back into the public forum recently, thanks to the World Meeting of Families and the Synod on the Family. With its faithful, Catholic education and campus policies, Christendom will continue to promote such a culture into the future.

To find out more about Spiering Photography, please visit spieringphotography.com