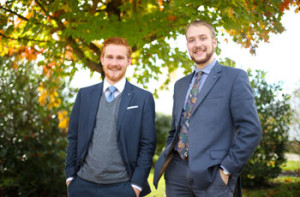 he Intercollegiate Studies Institute (ISI), a national educational organization, recently selected junior Peter Tapsak and senior Jacob Hiserman for their Honors Program for the 2015-16 academic year. A prestigious mentorship program for America’s top students, the program kicked off with a weeklong summer conference in August, where both Tapsak and Hiserman excelled due to their Christendom liberal arts education.

The Honors Program is ISI’s most selective program, choosing only a few dozen students from schools all across the United States annually for the past twenty years. Of sixty-six students selected this year, from colleges and universities such as Harvard, Yale, and Hillsdale, Christendom was one of the only colleges from which multiple students were selected.

Kicking off with a weeklong summer conference at the Jefferson Hotel in Richmond, Va., the program challenged the students to discuss several philosophical works on the traditions of liberty — discussions in which Tapsak and Hiserman excelled.

“My background in the philosophy and theology that undergirds our Catholic worldview helped me really argue for distinctly Catholic views in the breakout sessions, in a much deeper way than many of the others were able to do,” said Hiserman, who is also the chairman of the college’s Cincinnatus League.

“Something we have here at Christendom, that not a lot of other schools have, is our distinct, Catholic understanding of the liberal arts. In discussions, when students or the faculty moderators wanted a more Catholic perspective on a subject, they would turn to Peter and me, due to our education,” said Hiserman.

Tapsak agreed with Hiserman’s points, emphasizing further that their education definitely helped them stand out from the crowd.

“There were a number of things that I have read at Christendom that I could immediately reference and came to mind naturally throughout the discussions, especially from political science courses,” said Tapsak.

“One of John Henry Newman’s main points in The Idea of a University is the unity that is necessary for a liberal arts education — that unifying factor being theology, which guides and unites everything we study and brings it into a comprehensive whole. Because of our unified education at Christendom, we were able to bring that to the table in discussions, whereas other people who are studying the liberal arts often have to piece it together on their own, because they don’t have that unifying factor that puts it in the framework that we have. Seeing the benefit of our education in this way ultimately brought gratitude, and made me want even more of it as a result,” said Tapsak.

Over the course of the 2015-16 academic year, Tapsak and Hiserman will also be guided by assigned academic mentors, who will advise them on intellectual questions and career options. In addition, they will both attend further conferences through ISI, discussing such topics as the colonial revolution, free market economics, and federalism and constitutionalism with some of America’s top conservative thinkers.

ISI was founded in 1953 to inspire college students to discover, embrace, and advance the principles and virtues that make America free and prosperous. ISI directs thousands of young people each year to a wide array of educational programs, publications, fellowships, and online resources.