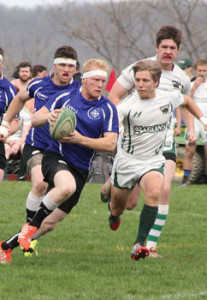 Christendom’s hard-hitting rugby squad is returning to the pitch early this year, thanks to an invitation to the Cardinals Conference Tournament at the Virginia Military Institute (VMI) on Saturday, November 7. Starting with a game against James Madison University, the Crusaders will look for their first win of the year after their incredible spring season.

The Crusaders received an invitation to play in the tournament after their 7-2 record last season. Playing with a roster of over forty men, many competing for the first time, the rugby team performed extraordinarily well last year, starting their season off with a huge win over Mount St. Mary’s University.

They carried this momentum into a six game winning streak in which they scored 128 unanswered points in the Jeff Hewitt Memorial Cup tournament. The defining moment for the Crusaders, however, came in the annual Shield Match against Franciscan University of Steubenville, where they crushed the Barons 57-11.

The Crusaders will look to add another trophy to the case in Crusader Gymnasium at the Cardinals Conference Tournament, after adding three new additions in the spring: the Jeff Hewitt Memorial Cup, the Collegiate Men’s Division Plate from the New York Sevens Rugby Tournament, and the Shield Trophy.

With high expectations for this season, the Crusaders have been practicing for weeks now in preparation for their first entry into the tournament. When they travel to VMI tomorrow, they will be joining some of the biggest schools in the nation on the pitch, including Duke University, University of William & Mary, Virginia Commonwealth University, and James Madison University.