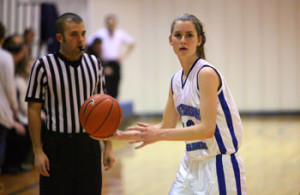 Crusader basketball returned to the court this past weekend, with the Lady Crusaders playing in the Davis College Tip-Off Tournament in Johnson City, N.Y. Playing in the third place game on Saturday, the Crusaders defeated Word of Life Institute (WOL) 59-43, marking their first win of the season.

After a tough loss the night before against Penn State Mont Alto, the Lady Crusaders came out to a quick start and never looked back on their way to their first win of the season. Fueled by their defense, the women forced WOL into turning the ball over early and often and capitalized on the mistakes. At the end of the first quarter, the Lady Crusaders held a commanding lead. Led by the defensive pressure applied by Danielle Corcoran, Bryn Burgess, Gemma McMahon, and Helena Briggs, the women raced to a double-digit lead by halftime.

The second half saw WOL make a run in the 3rd quarter and cut the lead down to single digits. Then, the Lady Crusaders ratcheted up the pressure, led by the energy of new Crusaders Courtney Hahn, Georgie Messing, and Kate Willson. On the offensive end, McMahon and Burgess continued their strong tournament and Liz Ford got in the mix as well, scoring on a number of put backs after grabbing offensive rebounds. By mid-way through the 4th quarter, the Lady Crusaders had blown the game wide open to a 21-point lead, finishing the game by a score of 59-43.

“It was a great team effort. To play so well and with so much energy on the defensive end after a tough loss the night before was great to see. Having each member of the team play good minutes and contribute was awesome. I am excited to go through the season with this team as we continue to improve, especially on the defensive side,” noted women’s basketball coach Chris Vander Woude.

Burgess continued her strong offensive effort as she finished with a double-double, her second of the tournament, and a game high 34 points. The Lady Crusaders get another shot against Penn State Mont Alto as they travel to play them this Tuesday before heading to Charlotte, N.C. this weekend for two more games.