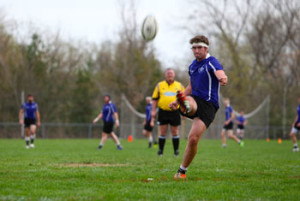 Christendom’s Crusader rugby team returned to the pitch this past weekend, playing in the Cardinals Conference Tournament in Harrisonburg, Va. Competing against some of the best schools on the East Coast, and with many players injured, the Crusaders scored their first victory of the season against James Madison University.

With only a few weeks of practice under their belts, the Crusaders blitzed through the first round of the tournament on Saturday with a stunning win over James Madison University, 33-6. The Crusaders attacked the JMU defense early and often, with tries scored by Richard Blank, Paul Maschue, Dan Snyman, and team captain Pat Audino.

The victory earned Christendom a spot in the second round of the tournament on Sunday, as they hunted for another trophy to add to their collection after earning three last season. On Sunday, the absence of the many starters who are studying in Rome this semester and the loss of many players to injury was felt as the Crusaders took on the considerably larger Griffins Rugby Club, an under-23s club from Northern Virginia. Despite a valiant effort from the Crusaders, the Griffins ultimately snatched away the team’s chances of a plate victory.

The team’s huge first win over JMU, and their invitation to the tournament, which featured Duke University and the College of William & Mary, marks a strong start to their season, after their incredible 7-2 performance in the spring.

The Crusaders will play a few more games this fall before the full rugby squad comes back together this spring for the annual Shield Rugby Match, amongst other games and tournaments.

The Crusaders will play again this coming Saturday against Mary Washington University in Fredericksburg, Va.