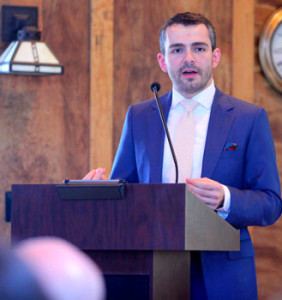 Religious freedom expert Ryan T. Anderson is featured in the latest issue of Principles, a free, bimonthly periodical of Christendom College. Writing about the future for defenders of traditional marriage in this country, Anderson tears open the current marriage debate to expose its harsh truths, while also encouraging families, churches, schools, and businesses to stay vigilant against the coercive powers now in government and academia.

Anderson, a frequent guest on CNN, ABC, Fox News, and the author of Truth Overruled: The Future of Marriage and Religious Freedom, sees the recent Obergefell v. Hodges decision in the Supreme Court as the completion of the sexual revolution, as it redefines “our civilization’s primordial institution. It has cut marriage’s link to procreation and declared sex differences meaningless.”

“We are sleepwalking into an unprecedented cultural and social revolution. A truth acknowledged for millennia has been overruled by five unelected judges, [and] the consequences will extend far beyond those couples newly able to obtain a marriage license,” continues Anderson.

While some might think that defenders of traditional marriage will ultimately be ostracized as bigots, Anderson thinks differently. Pointing to the abortion debate, Anderson notes that pro-life citizens are not, for the most part, treated as “anti-women.” That respectful trend has yet to extend toward those who defend traditional marriage, but Anderson encourages people to not lose faith.

“We must now work to reverse that trend. And our work must start by helping our neighbors at least understand why we believe what we believe about marriage. Only if they can understand what motivates us will they respect our freedom to act on such motivation,” says Anderson.

The reality at hand is harsh, and the challenges ahead will be many, according to Anderson. Just as the pro-life community woke up again after Roe V. Wade, the traditional marriage community must do the same if there is to be any hope for the future in this country and beyond.

In conclusion, Anderson calls on members of the Catholic Church, especially, to live out the truth about marriage and human sexuality. This is the most important and the most challenging task, but it can be taught in the simplest way: through the beauty and splendor of a happy family

“There is an enormous task before us of defending our families, churches, schools, and businesses from opponents who now wield coercive power in government, commerce, and academia. It is time to equip everyone, not just the experts, to defend what most of us never imagined we would have to defend: our rights of conscience, our religious liberty, and the basic building block of civilization—the human family, founded on the marital union of a man and a woman,” says Anderson.

To read the entirety of his article, and to subscribe to Principles, please visit getprinciples.com.