Christendom Players Wow Audiences with Classic Father of the Bride 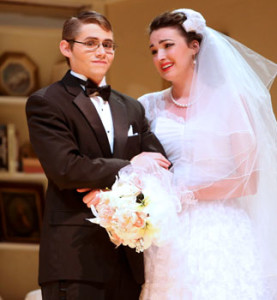 The Christendom Players performed the hilarious and heartwarming rendition of Caroline Francke’s Father of the Bride Nov. 20-22 at the Warren County Middle School in Front Royal. Audiences filled the theater for all four shows, leading to another huge success for Christendom’s drama group.

Packed with impressive performances, the students involved brought to life one of literature, and film’s, classic romantic comedies. Dr. Patrick Keats, an English professor and one of the play’s four directors, described the play’s value as a literary work.

“The play has all the elements of the classic comedies of writers like Shakespeare, but presented with modern touches.  There’s a good balance between the poignant and comedic, while being very realistic and even profound at times,” said Keats, who has produced Christendom’s theatrical productions for years. Father of the Bride marks his thirty-seventh production at Christendom.

Students from each of Christendom’s classes took part in the play, including seasoned Christendom player and junior Brendan Williamson, who played the father, Mr. Stanley Banks. Williamson has been an active member of the Christendom Players throughout his time at the college, but this was his first time playing the lead role.

“It’s good to build and develop the skills we are given,” explained Williamson.  “While building up my skill as an actor,I have been able to meet so many great people, and by becoming a better actor I am able to use this talent to present good messages to different audiences effectively.” 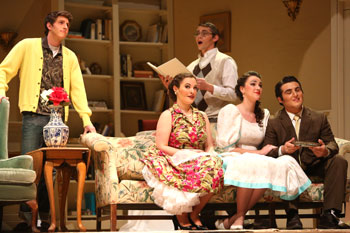 “The acting experience at Christendom is valuable because it ties directly into the rich community here, where everyone supports each other,” sophomore Lemieux affirmed.

Though this was her first time appearing in a Christendom production, Lemieux has previous acting experience.  In comparison, she noted that working with the Christendom players was exceptionally enjoyable because of the “positive and low-stress” atmosphere during practices, where everyone was truly there for each other.

The Father of the Bride was a huge success, not only warming the hearts of its audience, but also serving as a bonding experience for all those involved, as they presented a classic with the rich fullness that only a time-tested liberal arts perspective can provide.