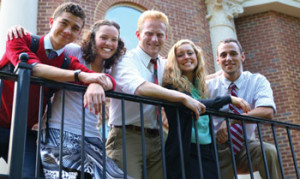 Early action deadlines are a popular option for prospective college students, as they ensure that students will receive an admissions decision before Christmas. Other colleges and universities saw this option paying dividends for them in the past week, with Princeton University receiving 9.4% more applications and the University of Pennsylvania receiving 4.4% more. Other colleges remained flat in their increases, with Yale reporting only a 0.6% increase in their restrictive early action applications.

Each of these numbers pales next to Christendom’s momentous increase of 21%, however, reflecting the hunger that prospective students have for the college’s exceptional Catholic, liberal arts education.

“The current generation of students simply wants more from an education than they’ve received in the past. They want an education that is authentic and that challenges them to be the great people that God calls them to be. This desire led to our record enrollment this fall, and that desire has only increased in the months since.  These record application numbers prove that,” says director of admissions Sam Phillips.

Another impressive statistic is the number of men in the application pool, with the college reporting 49% more male applicants compared to this time last year. This huge a jump is unheard of in higher education today, as the ratio of four college-educated women to every three college-educated men continues to widen, according to recent studies.

Phillips believes that men are responding positively most of all to the challenge offered by Christendom’s education, and are seeking to embrace it in their quest to achieve greatness in their own lives.

“Men respect, and love, a challenge. More and more men are visiting Christendom than ever before, thanks, in part, to our expansion of the Experience Christendom Summer Program. They’re seeing exactly how Christendom can challenge and form them into great men — great men who can change the world, and make their mark on history,” says Phillips.

While Christendom’s early action deadline is now closed, students are encouraged to apply for the regular admission deadline of March 1, before a waiting list has to be implemented. For more information on how to apply, please visit christendom.edu.