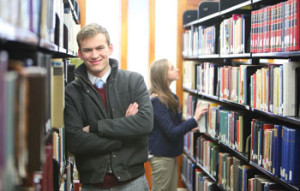 Christendom College has been named a 2016 “Best Value” college by Kiplinger’s Personal Finance in its annual exclusive list of the top colleges in the United States. Kiplinger’s made the announcement earlier today, including Christendom due to its outstanding combination of quality and affordability.

“We’ve been named to this list year after year by Kiplinger’s, a testament to our affordable and authentic, challenging liberal arts program,” says vice president for enrollment Tom McFadden.

Kiplinger’s assesses the value of a college by measuring standards of academic quality and affordability. Quality measures include the admission rate, the percentage of students who return for sophomore year, the student-faculty ratio and four-year graduation rate. Cost criteria include sticker price, financial aid, and average debt at graduation.

While other colleges are struggling to fill their classrooms, Christendom is in the midst of a record-breaking year. This past spring, the college celebrated its largest graduating class ever, before welcoming its largest freshmen class in the fall. Interest in the college is showing no intent of dying down either, with the admissions department recently reporting a record number of applications for the fall of 2016.

“We start with a universe of 1,200 schools, so each school on our rankings, from number 1 to number 300, is a best value,” said Janet Bodnar, Editor of Kiplinger’s Personal Finance magazine. “Families can use the list as a starting point and then tailor it to each student’s preference for such things as size, location, campus culture and major.”

The Top 100 Best College Values Among Liberal Arts Colleges list is both available online. More information is also available online at kiplinger.com/links/college. The rankings will also appear in the February 2016 issue of Kiplinger’s Personal Finance, which will hit newsstands Jan. 5, 2016.