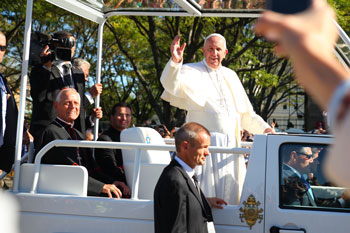 Pope Francis’ visit to the United States this past fall was felt in every corner of the world, as his messages of love and the importance of family spread from Washington, D.C. to New York, to Philadelphia, and beyond. Christendom College was blessed to play a small part in the Pope’s first visit to the U.S., welcoming him to our country at Andrews Air Force Base and wishing him a farewell at his final Mass in Philadelphia.

College president Dr. Timothy O’Donnell, a consultor to the Pontifical Council on the Family, had the privilege to speak at the World Meeting of Families — the main reason for the Pope’s visit to America — on a topic near to Pope Francis’ heart: the family as a domestic Church.

When he arrived in Philadelphia, O’Donnell spoke in a breakout session titled “Rebuild My Church and Start from the Foundation: Living as ‘Domestic Church’, with his talk touching upon the theme of this year’s World Meeting of Families: “Love is the Mission: The Family Fully Alive.” 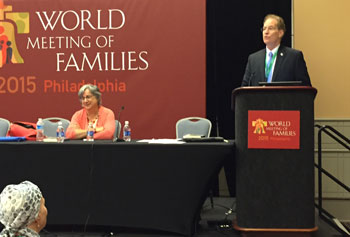 His talk drew hundreds of guests, as he spoke on the need for families to be “Churches in miniature,” allowing them to be extensions of parishes once again. The next day, O’Donnell chaired another breakout session titled “Ahead of Its Time: The Prophetic Character of Humanae Vitae,” where he moderated the talk, featuring Dr. Janet Smith, and participated in a closing question and answer session as well.

While O’Donnell defended the notion of traditional families in his talks, another Christendom great prepared for her moment with Pope Francis: Marie Miller. Alumna Marie Miller, a successful singer and songwriter, was one of a few to perform for the Holy Father at the Festival of Families in Philadelphia.

Since leaving Christendom College, Miller has been quite successful, performing in nearly all fifty states, and her songs have received a lot of air time on both Christian and secular radio stations. But playing at the Festival, with over 750,000 people in attendance, not to mention the hundreds of thousands tuning in on the television and internet, was the highlight of her career thus far. When she hit the stage, Miller joined actor Mark Wahlberg and musical acts Aretha Franklin, Andrea Bocelli, and the Fray, becoming one of the select few to actually perform for Pope Francis during the Festival. 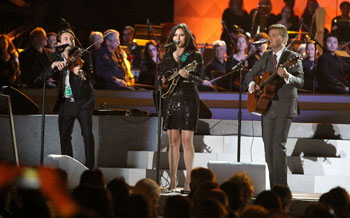 Other members of the Christendom community assisted in welcoming Pope Francis to the United States, with alumnus Seaman Brian McCrum (’14) greeting Pope Francis on the tarmac at Andrews Air Force Base upon his arrival to America. McCrum, an Honor Guardsman in the United States Coast Guard Ceremonial Honor Guard, stood at attention as Pope Francis took his first steps onto American soil — an incredible honor that was photographed by countless news sites across the world.

Christendom’s proximity to both Washington, D.C. and Philadelphia allowed students, alumni, faculty, and staff to make their way to the various papal events and encounter the Holy Father. Some travelled to the papal Masses, others lined the streets of D.C. to see the Pope, but in every case, the Christendom community offered their prayers for him as he brought his message of hope to America, and in thanksgiving for the gift of the papacy to the world.