Crusaders Return to Field and Court with Exciting Spring Seasons 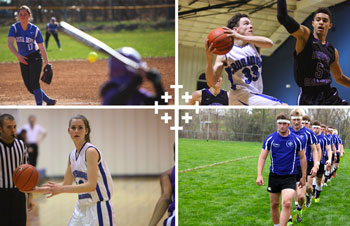 The excitement, suspense, and cheering crowds that accompany Crusader sports will return to Christendom in the coming weeks, with the return of basketball, softball, and rugby to the school’s athletic facilities. Aiming to top their banner 2015 year, the athletic teams will welcome new players and old rivals to campus this spring, beginning next week on January 23.

2015 marked one of the greatest years for athletics in Christendom history, with new trophies and sports decorating the athletic program. Over the course of twelve months, fans saw the soccer teams score top USCAA rankings, the rugby team win the annual shield match, and the additions of women’s softball and men’s and women’s cross-country to the athletic program.

Under the leadership of athletic director Patrick Quest, the Crusaders will carry that bright legacy into a promising 2016, starting with the return of men’s and women’s basketball.

The youthful men’s and women’s teams will look for redemption after some tough games in the fall, beginning with matches at home against the University of Valley Forge and Williamson College on January 23. Both teams will play twelve of their sixteen spring season games in front of the Christendom Crazies at home, looking to ride the energy of the crowd as they take on tough teams, such as Davis College and conference rival Mid-Atlantic Christian University, before the end of their respective seasons.

The reintroduction of women’s softball to the athletic program last spring brought unexpected surprises for all involved, when they exceeded expectations with a 6-3 season record. With new confidence, deeper determination, and the addition of several talented softball freshmen players to the team, the Crusaders will aim to best their 2015 record in an expanded season, starting March 12 at home in a double-header against Wilson College.

On the rugby pitch, the Crusaders have a tough act to follow from last spring — an incredible 7-2 record, earned against teams such as NCAA Division III Franciscan University of Steubenville in the annual shield match.

With a 5-2 record from this past fall, the men are well on their way to topping that record, as they carry that momentum into their opening spring game at home against the University of Mary Washington on February 13. Their greatest matches will follow soon after, as the Crusaders take on the College of William and Mary, Duke University, and Franciscan University in the annual shield match in their longest season to date.

For more information on these games and Christendom athletics, please visit christendomathletics.com.