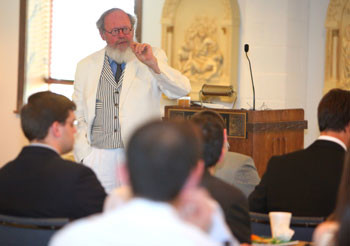 Marshner’s course will provide a study of the first generation of Christians who lived after the Ascension of the Lord. Called the “age of the Apostolic Fathers,” the lives and writings of the men and women who lived during this period will help illuminate the earliest days of the Church for attendees, giving them a greater understanding of both the Apostolic Age and the modern as well.

Marshner is one of America’s leading Catholic theologians, and was a member of Christendom’s theology department for thirty-eight years. He still writes for the college as a scholar in residence, working as an author and guest speaker.

A convert to the faith and an eminent Thomistic theologian, Dr. William Marshner pursued his undergraduate studies at Gettysburg College, majoring in Greek. While pursuing a degree at the Yale graduate school, he studied Hebrew, Akkadian, Aramaic, and other Semitic languages. He earned an M.A. from the University of Dallas and his S.T.D. from the Pontifical John Paul II Institute at the Catholic University of America. First encountering Christendom founder Dr. Warren Carroll while they both worked at the Catholic magazine Triumph, Dr. William Marshner became one of the five founding faculty members of Christendom in 1977. Due to extensive work in the field of theology, Marshner was named the first chairman of the theology department of the college, a position he would hold for a number of years before continuing on as a professor at the college for the next thirty-eight years. Marshner has been published extensively in newspapers and academic journals, with his latest work, An Anti-Modernist Anthology, being released this year.

Holy Spirit Church Hall is located at 8800 Braddock Rd., Annandale, Va., 22003. Admission is free but application and acceptance into the course are required. For more information and to apply please visit instituteofcatholicculture.com, and download the flyer here.