The Christendom College Players will return to the stage April 7-9, performing the Tony Award-winning musical within a comedy, “The Drowsy Chaperone.” A hilarious send-up of 1920’s musical comedies, the production promises to be fun for the whole family, and will be presented at Warren County Middle School in Front Royal, Va. 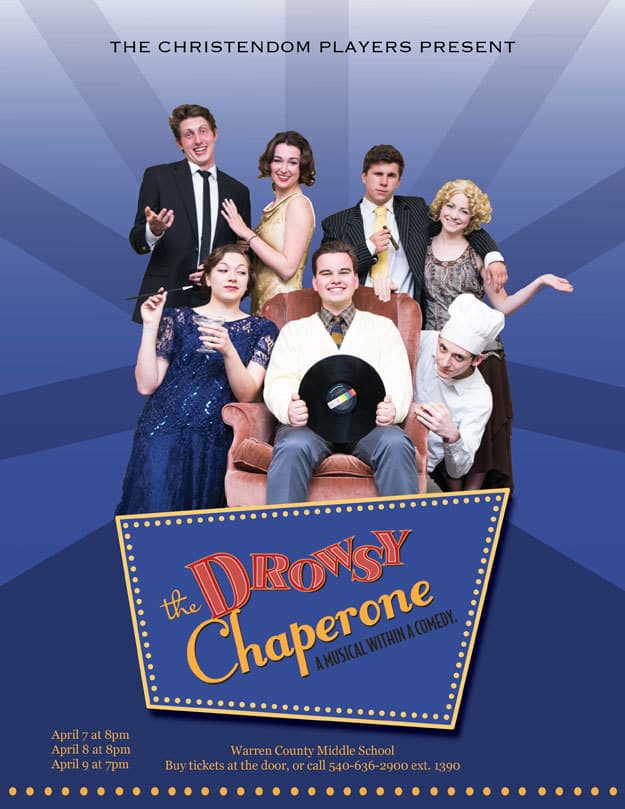 Winner of the 2006 Tony Awards for Best Score and Best Book and nominated for Best Musical, “The Drowsy Chaperone” centers on a middle-aged, asocial musical theatre fan. As he plays the record from his favorite musical, the fictional 1928 hit “The Drowsy Chaperone,” the show comes to life in his apartment, and he provides a wry commentary on the story, music, and actors.

Directed by alumnus Stephen Hyland, a veteran of the Christendom Players, and produced by English language and literature professor Dr. Patrick Keats, who has been involved with Christendom theatrical productions for over twenty years, “The Drowsy Chaperone” will be performed at 8:00 p.m. on April 7 and 8, and at 7:00 p.m. on April 9. Admission is $7 per adult and $5 for Christendom College students.

Tickets may be purchased at the door, but they can also be reserved beforehand by calling 540-636-2900.