Christendom’s graduate school offers an education which provides a firm foundation in the truth and tradition. The courses in philosophy, sacred scripture, morals, and doctrine enable those who have received this formation to grow into a deeper understanding of the faith. With the knowledge and formation from Christendom’s graduate school, students and alumni are able to make a difference in the world, sharing this knowledge and formation with others. 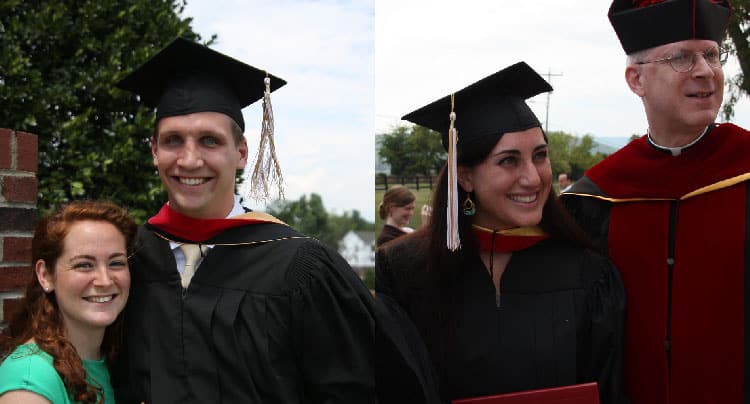 Rizkallah is a theology teacher at St. Mary’s Catholic High School in Phoenix, Arizona, and earned her MA from Christendom in 2010.

“I am so thankful for my Christendom degree. I highly recommend the program, which is an excellent preparation for the work of catechesis and evangelization. I met great people at Christendom whom I expect to be my friends for life and to help support me in my evangelizing ministry. Christendom professors were wonderful professors, but the human formation was the best part, since my teachers were not only teachers, but also witnesses. Every day I use the things I learned at Christendom in my teaching and evangelizing,” she says.

She was also impressed with the college’s vast network, which enabled her to advance in a number of ways.

“The network at Christendom opened the doors for me to participate in a number of para-academic programs,” she relates, “including the Phoenix Institute in Trumau, Austria. I was able to present a paper on St. Edith Stein’s thought on persons and communities. I definitely would not have been able to do this had I not received such fine academic preparation from Christendom.”

Through this education, Rizkallah is making a difference in the lives of her students by teaching the truths of the faith and exemplifying a joyful Christian life to them, just as she experienced from the Christendom professors.

Similarly, Inman received his MA in Theological Studies from the Christendom’s graduate school and has been teaching high school history for the past three years.

“My education has influenced my entire approach to teaching,” says Inman. “At the heart of all of my classes, I seek to have students ask the most fundamental questions and discover the deeper principles of reality so that they not only acquire historical knowledge, but in and through the history, the beginnings of wisdom and a foundation for living rightly.”

Inman and Rizkallah’s education from the Christendom graduate school has equipped them for a lifetime of sharing the faith and changing people’s lives. They are better able to share the foundational elements of the faith because of the formation given by the graduate school and its curriculum which is rooted in tradition and academic excellence.

For more information about the graduate school and to learn how catechists, Catholic school teachers, and Directors of Religious Education can save 50% off tuition, go here.