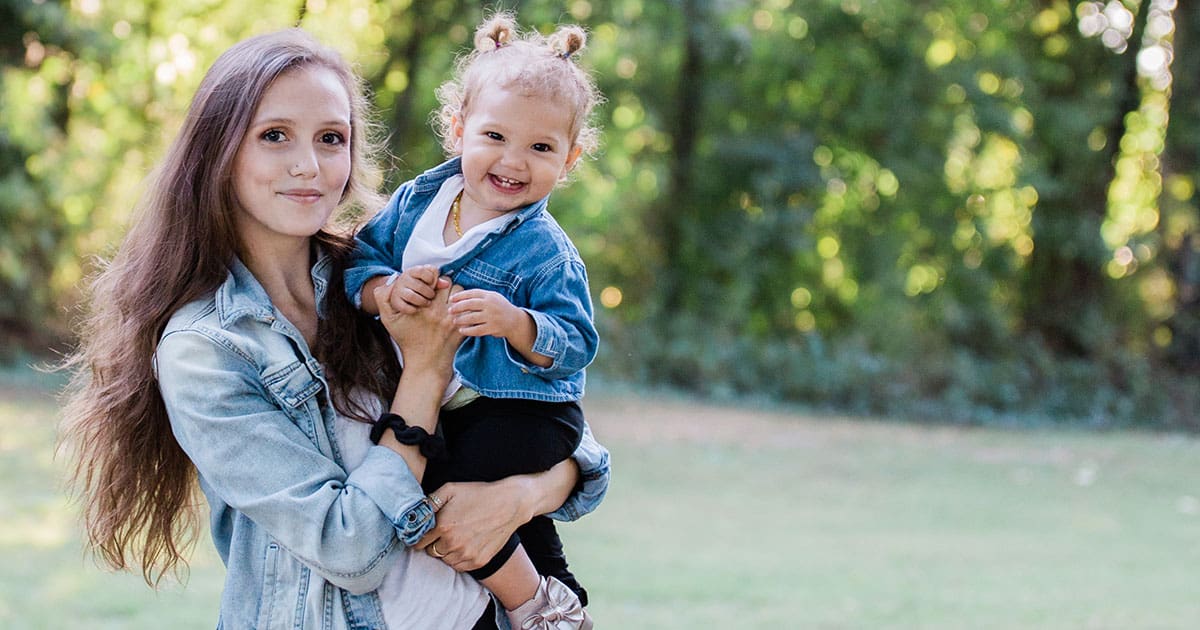 Alumna Marygrace Tucker (’18) has a remarkable story to tell – one of fear, hope, and redemption. In her recently published article, “A Miracle I Didn’t Know I Needed,”  Tucker tells of her decision to choose life in the face of an unplanned pregnancy, and the immense joy her child has given to her. First published in Celebrate Life Magazine, her story has since been picked up by other sources, and she was recently interviewed by Al Kresta on Ave Maria Radio.

According to Tucker, her baby Ariana Hope helped her to turn her life around, return to the Faith, and in a real way, saved her life. But when Tucker initially found out she was pregnant she was overwhelmed by fear.

“I was disappointed, depressed, and scared, and I had no idea what to do,” wrote Tucker.

It seemed that the timing of this pregnancy could not have been worse. Tucker found out she was expecting just two weeks before her senior year at Christendom, a time in her life where she was in a “downward spiral” of abusing alcohol and struggling with mental health. Tucker couldn’t have felt less prepared to bring a new life into the world. She had no idea how she was going to raise a child, let alone graduate from Christendom.

But God’s timing was at work. The new life that Tucker was nurturing inspired her to change her life and return to the practice of the Faith. Tucker’s parents, devout Catholics and strongly pro-life, gave Tucker the unconditional love and support needed to help her raise Ariana. Tucker also found support from the baby’s father, her friends, and from the Christendom community.

Tucker was initially scared that she would not be able to graduate from Christendom. Managing the academics with a pregnancy would be difficult, and she was unsure how the college would react to her pregnancy.

But Tucker’s fears were alleviated by the immense outpouring of support from the Christendom community. Her fellow classmates treated her “amazingly well,” and the junior and senior women even organized a baby shower. The student life office made sure that Tucker had every accommodation, providing a personal room right next to a private kitchen, and lifting the professional dress code so Tucker could attend class comfortably. The professors were also extremely accommodating.

“If I didn’t feel ok in the morning and missed class, I could just come by the office later and catch up whenever I felt better,” Tucker told Al Kresta. “They made it completely possible for me.”

In fact, one of the first people Tucker told about her pregnancy at Christendom was one of her philosophy professors.

“Right away he assured me that I would be graduating with my class,” Tucker told Kresta. “He promised everything would be ok. He said he would have my back… [Christendom] showed how pro-life they really are, when it comes down to it.”

At the 2018 commencement ceremonies, Tucker proudly walked with her class. Dressed in a matching cap and gown, Tucker carried one-month-old Ariana across the stage with her. 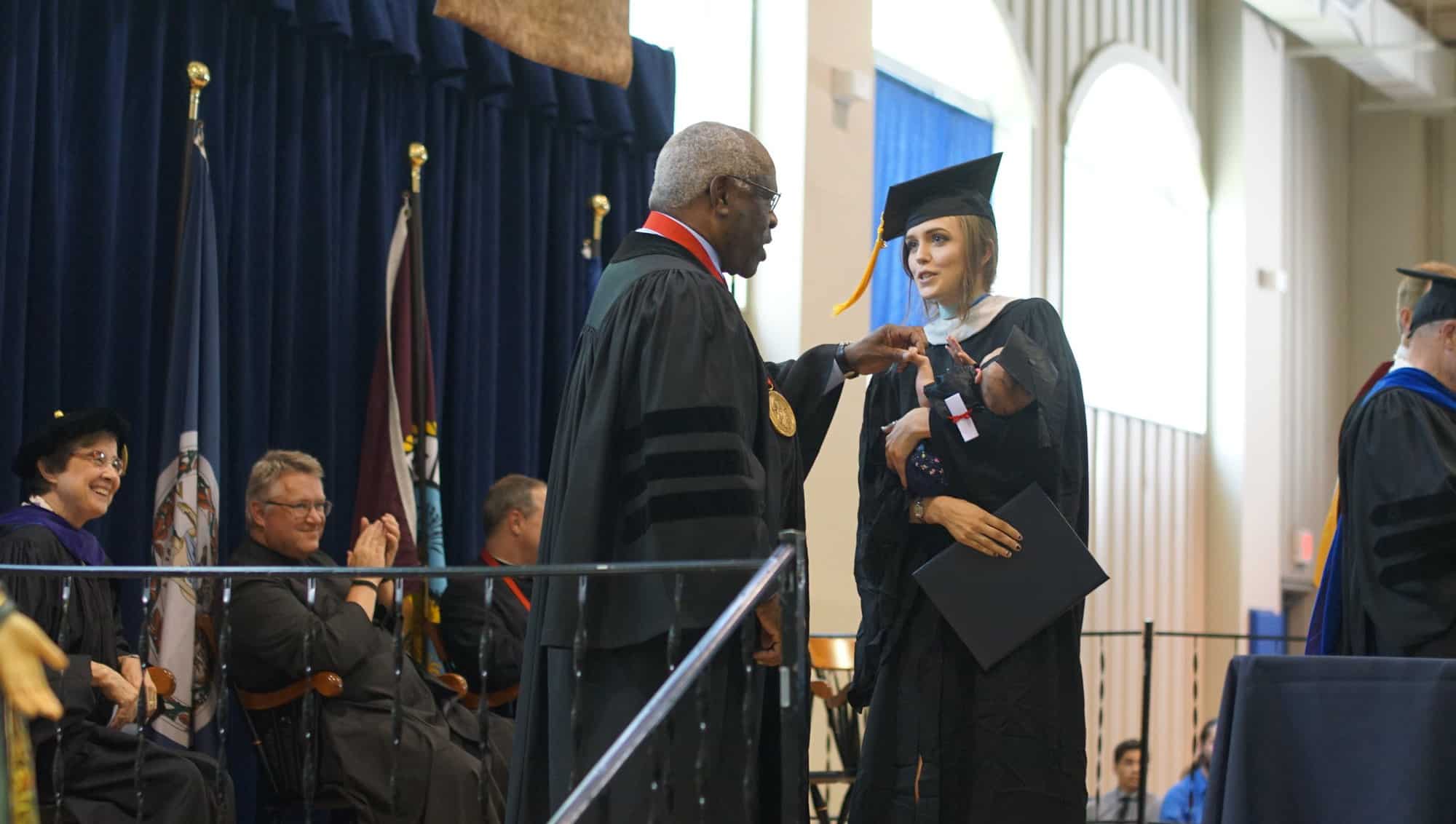 Now, Tucker hopes to use her story to support and encourage women who are in a similar situation.

When Tucker was still expecting Ariana, she would travel on Saturday mornings with the Shield of Roses Club at Christendom to pray outside a local abortion clinic. Tucker would usually peacefully pray, but one day, a woman who was going into the clinic insisted on talking to Tucker instead of the sidewalk counselors.

The woman was overwhelmed by fear and had no idea how she was going to handle the pregnancy, a feeling Tucker could relate to. But Tucker assured her that everything would be ok, and that the fear she was experiencing would eventually turn into feelings of deep love.

“You are already a mother,” Tucker told the woman, who was 10 weeks pregnant. “If you go in there, they are going to tell you that you don’t have a baby. I found out I was pregnant at 6 weeks, and I heard my baby’s heartbeat.”

Because of Tucker’s consoling words, the woman decided not to go through with the abortion which was scheduled for that same day.

Tucker is especially able to encounter women who are in this situation. She understands the fear, the regret, the sense of inadequacy.

“When I saw my positive pregnancy test, I thought, wow, this is why. This is why so many women get abortions, because of this feeling right here,” Tucker told Kresta.

But Tucker’s message is that those feelings of fear can and will change.

“To all the girls out there, those feelings that you feel that are so scary, they will turn into completely incredible feelings of love. I didn’t know this level of love existed.”

Tucker is doing incredible work for the pro-life movement by bravely sharing her story. She hopes to work for a pro-life organization one day and plans to continue helping women to choose life.