The current state of college campus culture is bleak. From politically biased professors, to Greek-life, to the distractions of modern technology and more, there is a whole host of reasons that today’s college students struggle to relate to Christ and live as Catholics. Henry Love (’19), Nuala Kelly, (’19), Ben Marsh (’19), and Mary Schneider (’18) are working to solve this crisis by serving as FOCUS missionaries, helping college students throughout the country to encounter Christ, learn the faith, and find belonging in a supportive Catholic community.

Love, Kelly, and Marsh during the 2019 Commencement Weekend

Following their graduations, each of these Christendom alumni decided to become missionaries for the Fellowship of Catholic University Students (FOCUS). From hosting Bible studies to meeting up with students to talk about the faith over a cup of coffee, these alumni-missionaries not only explain the faith to students, but also serve as examples of approachable Christians who joyfully live out their faith.

Mary Schneider (’18) is in her second year as a FOCUS missionary and is currently stationed at the University of Virginia. Schneider and her team lead Bible studies, and frequently meet with students to give advice and talk about the faith.

One of the hurdles Schneider and her team have had to overcome at UVA is the wide-spread perception that the Catholic faith, and religion in general, are for the naïve, superstitious, or bigoted.

“Students are constantly telling me stories of a professors belittling their faith, if not outright bullying them for it,” Schneider explained. “What’s even more common is for people to treat a student’s faith as an ignorant old custom they have yet to shake off.”

Schneider helps her students to see that this is not the case, and that the Catholic faith is grounded on a strong intellectual foundation.

Schneider and her team attend athletic events with their students.

“Living and learning at Christendom taught me the beautiful marriage between the intellectual tradition and the heart of the Faith, and that the two cannot be separated,” Schneider shared. “Christendom equipped me to lead others to see how the Faith does not stunt intellectual pursuit, but rather fulfills it.”

Henry Love, who graduated from Christendom this past May, is spending his first year as a FOCUS missionary at the University of Massachusetts-Amherst, the flagship campus for UMass.

Love with his FOCUS team.

According to Love, since the school is located in New England, many students are “culturally Catholic,” or “nominally Catholic”, but they were never meaningfully formed in the faith. Many students have even had negative experiences with the Church, whether it be through a bad experience with a Catholic school or a withering parish. According to Love, the culture on campus is truly “post-Christian.”

Despite these trials, Love has observed that “students are yearning for more, for truth, for meaning.”

The students Love ministers to at UMass not only want to grow in their faith, but they also want to belong to a vibrant and faithful community. This is why Love strives to recreate the wholesome culture found at Christendom with his students at UMass.

Love and his team hosted a weekend retreat for their students.

“One night last semester, I was having about 15 students over for a bonfire and naturally the men started to get rowdy and wanted to show off with the fire for the women, so I tried to direct their energy into learning how to swing dance with the young ladies,” Love shared. “It resulted in an incredibly fun night. Many students had never experienced something like that before. Lots of those students have come back asking for times like that again, a time where men and women interacted well with each other, not immaturely or separated as it often ends up.”

For Love, building a strong Catholic community on UMass’s campus is a top priority, and augments his team’s ability to share and teach the faith.

Nuala Kelly, who also graduated this past May, is a missionary at Western Kentucky University. Much like Schneider and Love, Kelly believes that the two key perspectives she brings to the table in her ministry are her intellectual understanding of the Catholic faith and her lived experience of what a thriving Catholic community looks like, both of which she gained at Christendom.

Kelly with her WKU team.

“Students often come to me and ask questions about the faith,” Kelly explained. “Because of the excellent formation I received through my philosophy and theology classes at Christendom, I am able to answer whatever questions students may have.”

Kelly intentionally meets with students, giving them an opportunity to ask questions about the faith, or even just ask for advice about daily life. Kelly shows her commitment to her students through simple ways of building community, like having girls over for coffee every Wednesday or hosting students for game nights and dinners. Ultimately, Kelly is trying to bring the wholesome, supportive, fun, and virtue-focused community she benefited from at Christendom to WKU.

Having students over for informal events is a key way Kelly builds community on WKU’s campus.

“One of the biggest parts of Christendom’s culture that I strive to bring to WKU is community where we strive for virtue while enjoying life together,” Kelly shared. “The community that I experienced while at Christendom gave me strong friendships, growth in virtue, and a deep love for the faith, along with many very happy memories. That’s the kind of community I try to build at WKU every day.”

Ben Marsh, the third member of the class of 2019 to join FOCUS, is stationed at Assumption College in Worcester, Massachusetts. Assumption College is an expansion campus, meaning that it is the first year a FOCUS team has been established at the college. 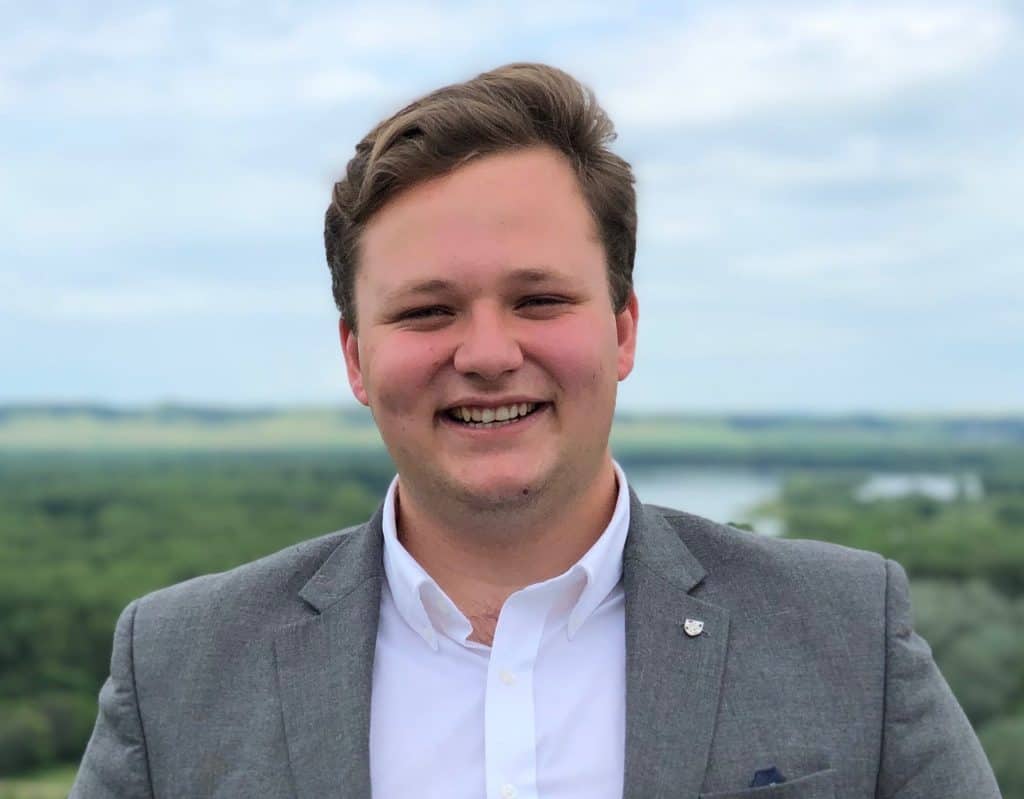 According to Marsh, one of the greatest issues at Assumption is isolation. From students walking around campus with Air Pods, to the prevalence of video games, and even apps like UberEATS and DoorDash making it possible for students to avoid dining halls, Marsh has observed that “modern technology makes it incredibly easy for students to completely ignore any real human interaction throughout their day.”

Despite the isolation issue on campus, Marsh says that he sees many students who are longing for a meaningful community and that his FOCUS team helps to fill that void.

One of the ways Marsh and his team build community is by hosting dinners for students.

“Christendom gave me a firm foundation for FOCUS by teaching me a Catholic way of life. It taught me that my relationship with Jesus is not just an aspect of my life, but the only aspect of my life that matters in the eternal perspective,” Marsh remarked.

Going on to reference the Sacred Heart Window that shines above the altar in Christendom’s chapel, Marsh shared, “Jesus does not say ‘Son, give me a part of thy heart’ in that stained-glass window of our chapel. He wants all of our hearts. That means he wants to be present at every moment in our lives; in our studies, in our meals, in our sports. Christendom taught me how essential Christ is to every aspect of my life.”

With this belief, Marsh seeks to encounter his students by introducing them to an “integrated life.” By engaging in what they are learning in the classroom, sharing meals with them, and joining them for intramural sports, Marsh uses these shared human experiences as an opening to share the Faith.

Schneider, Love, Kelly, and Marsh are remarkable examples of Christendom graduates who are using their Christendom formation for good in the world. Having encountered the Faith on an intellectual level, and also having experienced a true Catholic community, these alumni have been well equipped to “bring a bit of Christendom” to college students who are desperately yearning for meaning and belonging.

According to Marsh, “If you want to become part of the New Evangelization, come to Christendom. If you want to be on the front lines defending your Faith wherever you go in life, Christendom is second to none. If you wish to be trained to go and fulfill Jesus’ Great Commission, I can think of no better place.”

These alumni are the latest to respond to the missionary call of FOCUS, joining other past alumni — including current FOCUS director of philanthropy Andy Day (’06).

Christendom exists to provide a Catholic liberal arts education that will equip students to succeed in their lives and careers, while helping them strengthen and live their faith. By sharing their experience and their faith with other college-aged students that lack a faithful college environment, these alumni are fulfilling Christendom’s mission to “restore all things in Christ” in a powerful way.