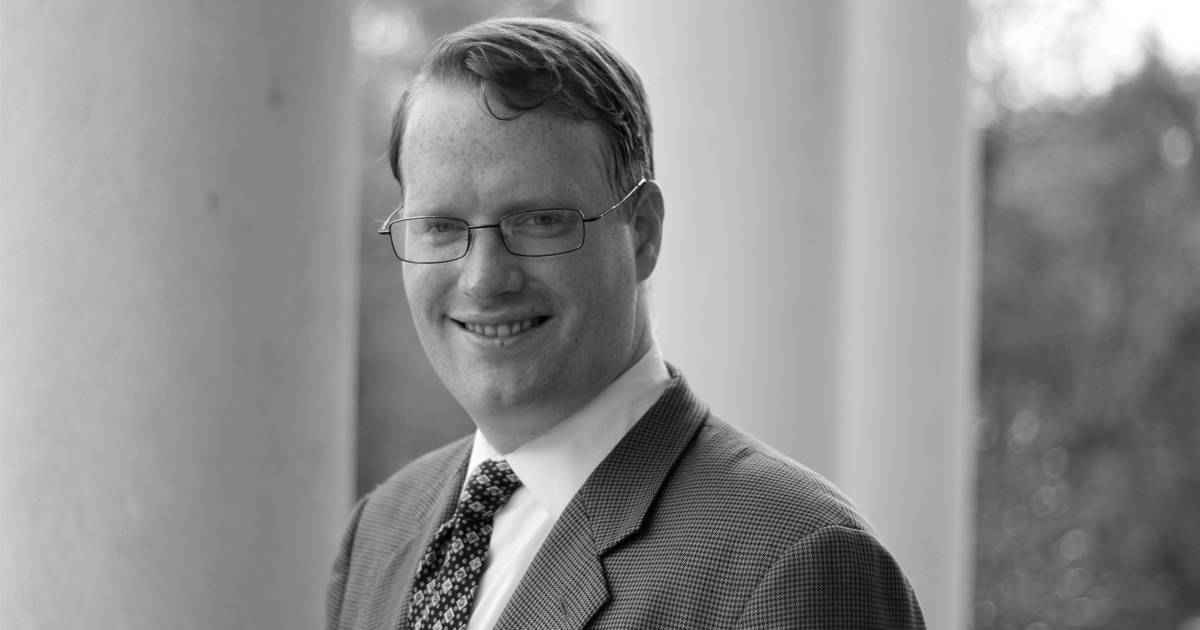 Please visit our Remembrance page for funeral information and for tributes to Dr. Brendan McGuire. The Funeral Mass will be live-streamed at 3:00 p.m. on Tuesday, October 13, and can be viewed here.

Beloved history professor Dr. Brendan McGuire passed away on Friday, October 9, after receiving Last Rites and the Apostolic Blessing. McGuire, a husband, father, and lover of baseball and rugby, died after a nearly decade-long battle with cancer. He was 37 years old.

“Words cannot express the incredible love, esteem and affection of the entire Christendom family for Brendan as faculty, mentor, friend and colleague,” said College President Dr. Timothy O’Donnell. “He gave himself so generously in the midst of suffering and so many challenges to the mission of Christendom College and it’s students. We will never forget his deep faith, his love, his passion and the intense joy he took in God’s great gift of life. Let us remember him, his wife Susan, their 3 children, Joseph, Jack and Aileen and all the members of his family in our fervent prayers. May God rest his soul.” 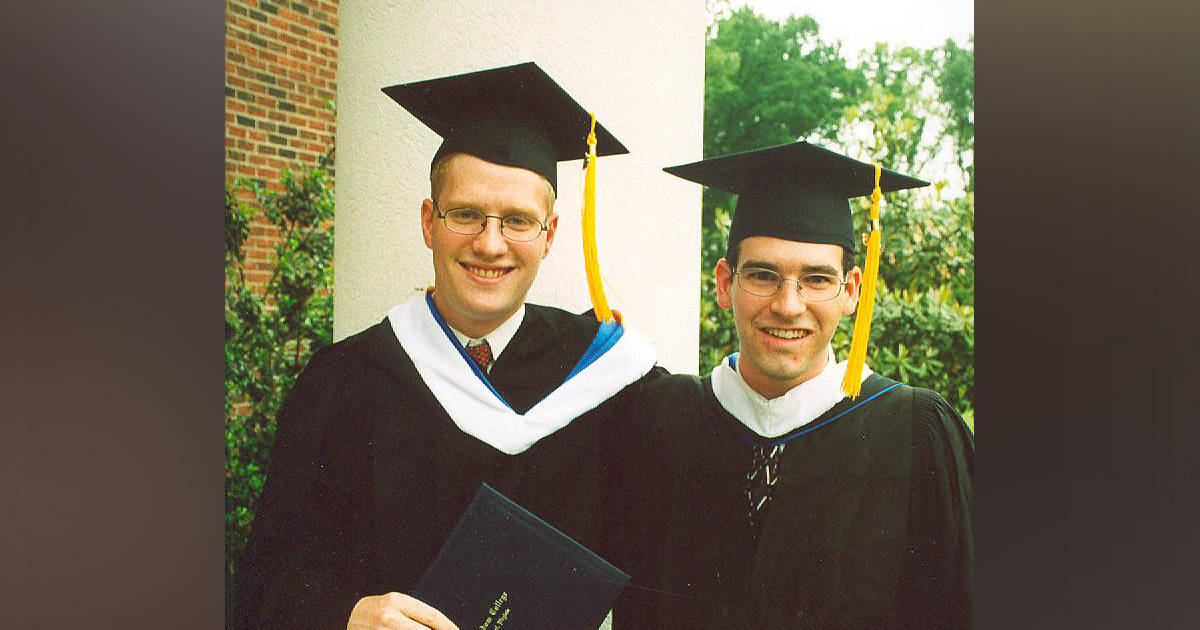 McGuire at his graduation with fellow graduate (and future colleague) Dr. Chris Lane.

Born on March 5, 1983, McGuire was valedictorian of the Class of 2003 at Christendom College, earning Bachelor’s Degrees in history and Classical Studies. Following his graduation, McGuire brought his love of history to Saint Louis University, earning his M.A. in Medieval History in 2005 and beginning his Ph.D. studies soon after. While completing his doctoral studies, McGuire returned to his alma mater in 2007 — this time as a professor, becoming the youngest professor in the college’s history at the time. 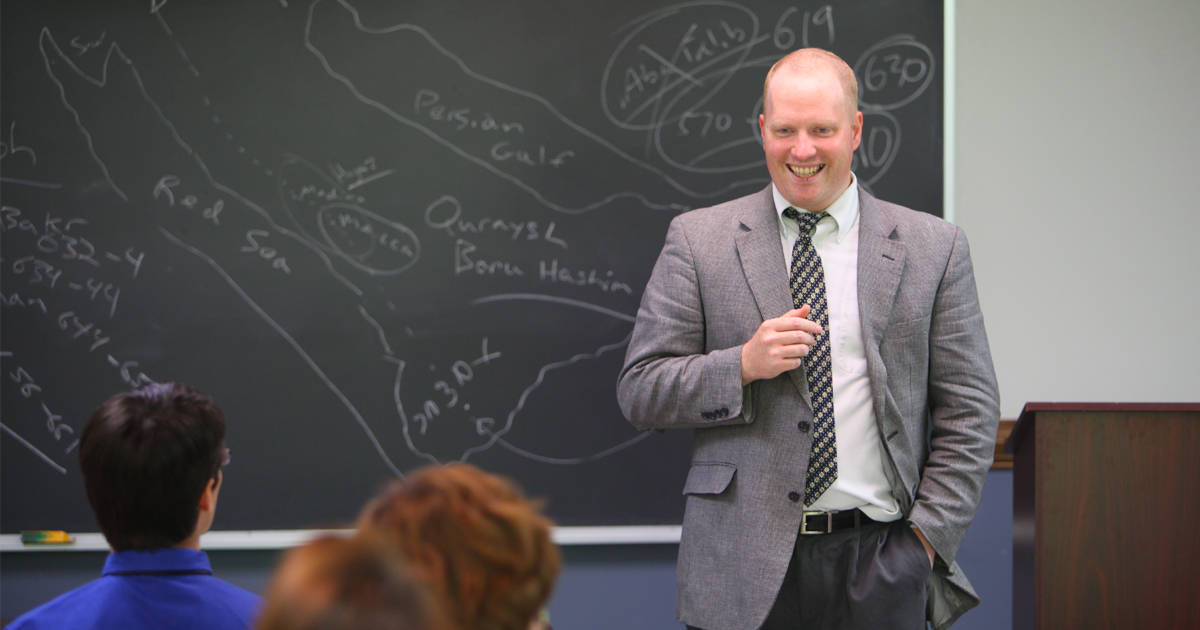 From the moment he returned to Christendom, McGuire became one of the most popular professors on campus. His passion for history, coupled with his devotion for students and incredible generosity with his time outside of class, made him one of the defining figures for many alumni of the college. Over the course of over 13 years of teaching, McGuire taught such classes as the Ancient and Biblical World, Early Modern Europe, Late Antique and Medieval Europe, Reconquista and Crusades, Islamic History, Medieval Germany and the Rise of Western Culture and the Christian Ethos. 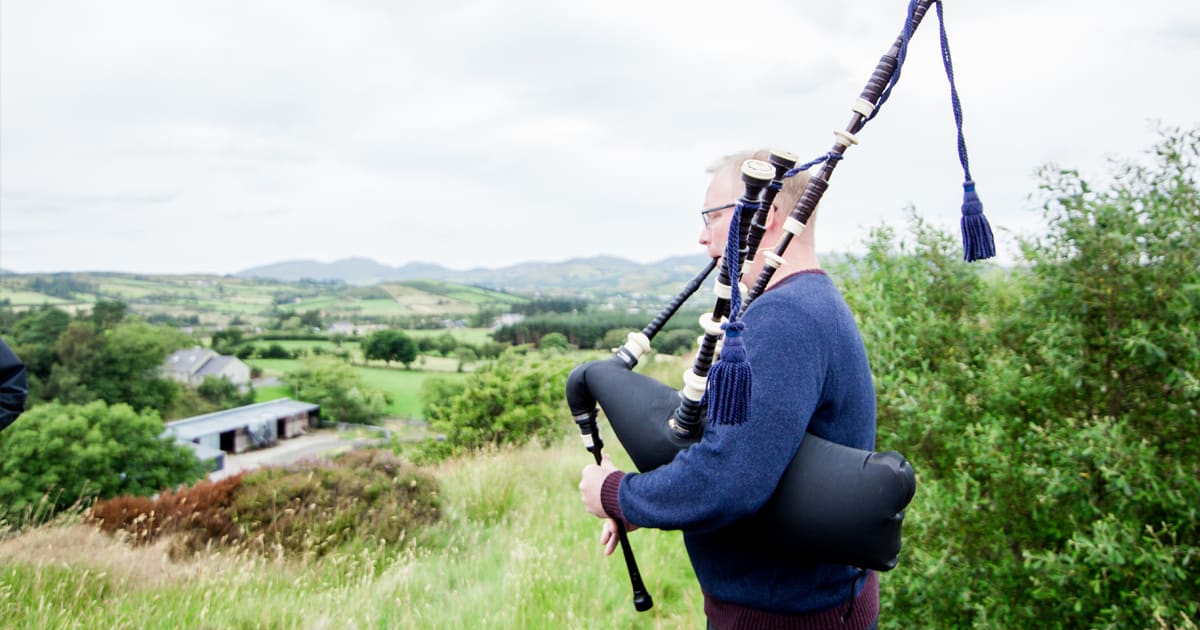 McGuire even taught students in Ireland for the college’s St. Columcille Institute, traveling to the island each summer to share his knowledge of Irish history along with his love for Irish culture. Additionally, McGuire taught history to visiting high school students for over a decade at the Experience Christendom Summer Program. 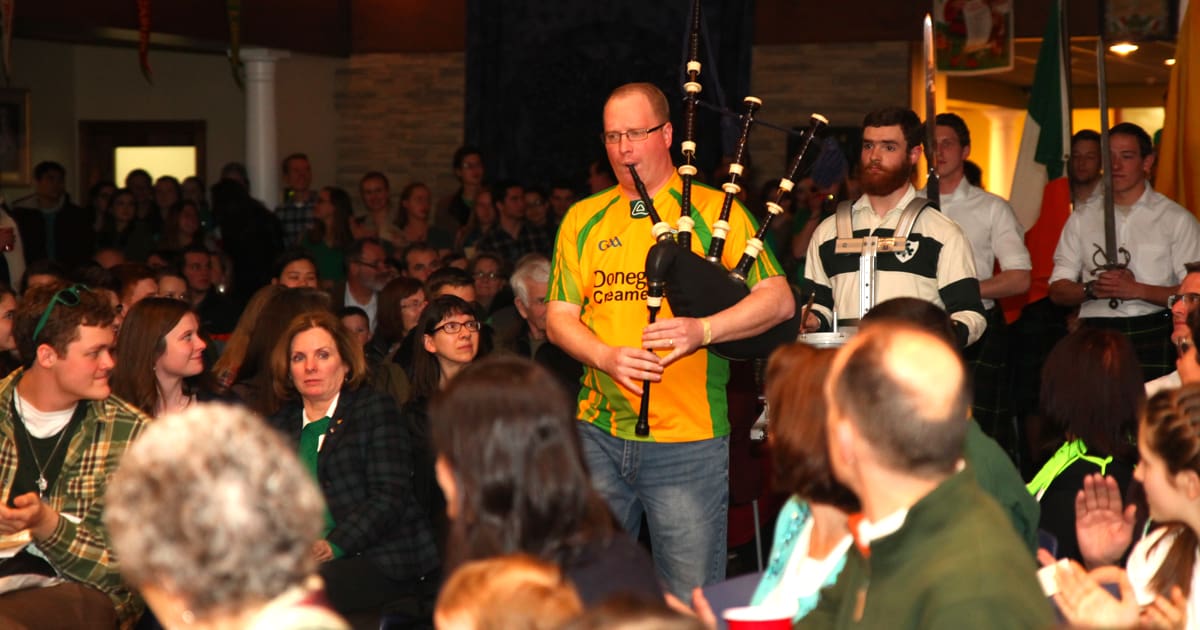 McGuire could often be found launching the St. Patrick’s Day festivities at Christendom, playing his bagpipes.

Outside of the classroom, McGuire could often be found sharing meals with students, walking to and from class with them, and standing alongside them at Daily Mass. He launched many St. Patrick’s Day celebrations on campus by playing his bagpipes, and he even coached the college’s men’s rugby team for a time, sharing his passion for the sport with students both as a coach and later as a fan as well. In recent years, McGuire could still be found along the sidelines, playing his bagpipes and firing up the players and fans alike. 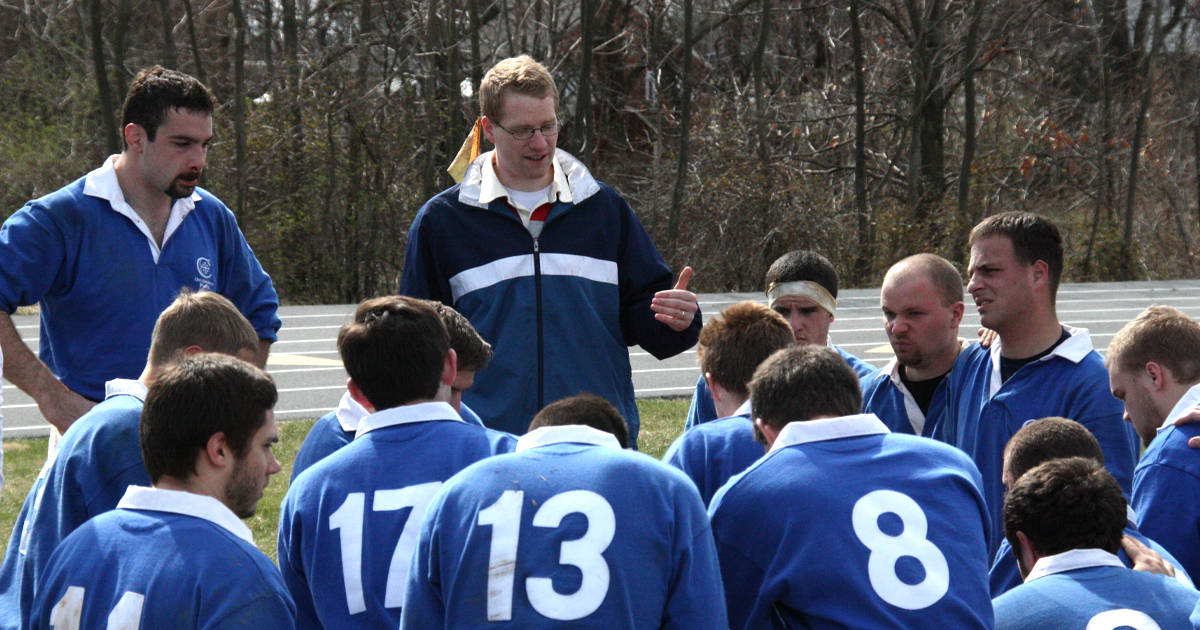 McGuire stepped in to coach the men’s rugby team in 2008.

McGuire’s love for the students he taught was only eclipsed by the love he had for his wife, Susan, and his three children, Joseph, Jack, and Aileen. Brendan and Susan were classmates, marrying after graduation and welcoming their three beautiful children to the world in the following years. In the midst of teaching classes, giving lectures, and grading papers, McGuire always made ample time for his children, whether it be coaching them in baseball or teaching them how to fish. 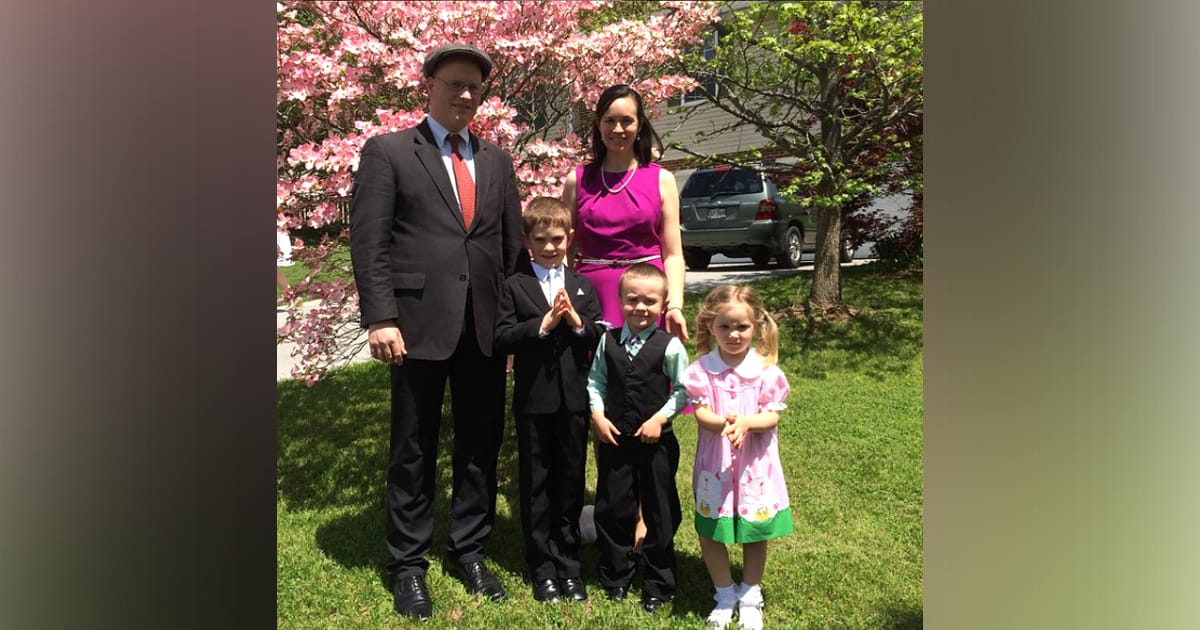 McGuire and his family.

In the fall of 2011, McGuire was given news that would change the course of the rest of his life: he was diagnosed with cancer. He began treatments immediately, fighting the cancer with his incredible will and his deep Faith. He beat it successfully, returning to the classroom soon after.

And yet, the cancer kept returning. Again and again, McGuire would fight it off, all while continuing to teach, whether on Christendom’s Front Royal campus or over in Ireland. When asked what kept him going, McGuire would often point to Christendom’s chapel, where he could be found receiving the sacraments and praying fervently throughout his battles and sufferings. 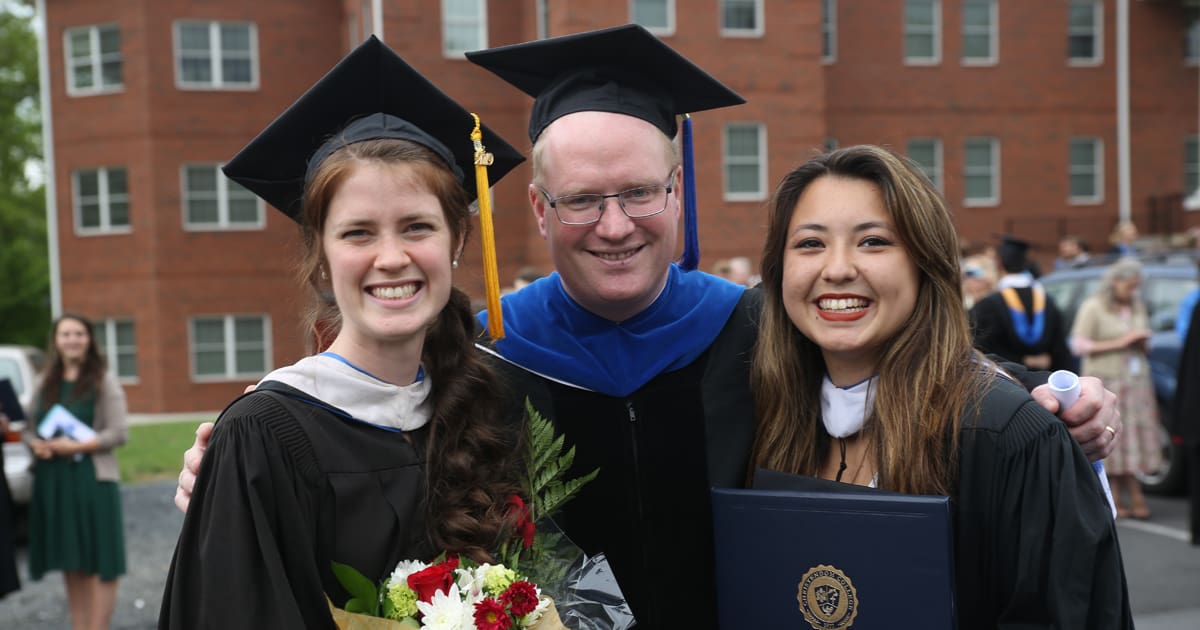 McGuire loved his students immensely and was always eager to celebrate their accomplishments at graduation.

This past year, he was diagnosed with cancer for a fifth time. McGuire fought once again, all while continuing to teach and spending every moment he could with his wife and children. In the early morning hours of Friday, October 9, after receiving the Last Rites and the Apostolic Blessing, McGuire’s battle ended.

McGuire’s passing is a tremendous loss to his family and the entire Christendom community. In the hours shortly after he passed, students took a statue of Mary — located in the residence hall where McGuire lived as a student — and placed it outside of his office door, along with flowers.

Christendom’s founder, Dr. Warren H. Carroll, was overjoyed when McGuire returned to teach at the college. McGuire surely heard Carroll’s famous words during his time at the college: “one man can make a difference.” McGuire was that one man, and for that the college is eternally grateful.

Read tributes to McGuire on our Remembrance page.

Three years ago, McGuire wrote about his battles with cancer. His words then are even more powerful now and illustrate how McGuire lived his life every day until his last. Please join the Christendom community as we continue to pray for Brendan’s soul and for his family.

“What do you want people to say about you when you’re gone? Me, I don’t really care, as long as they say ‘he loved his wife and kids, and he…fought to the end.’ Beyond that, I don’t care about human reputation. Fame, fortune, beauty, youth, fitness; they’ve all eluded me. As they do everyone eventually. But love — that I have experienced. Jesus Christ, our God, loved us so much as to accept death on the cross, and then immediately to show us the way to life. Death has no sting; hell has no victory. I might still be around for a while — but it’s always just a little while, isn’t it? But God has put eternity into the mind of man.” 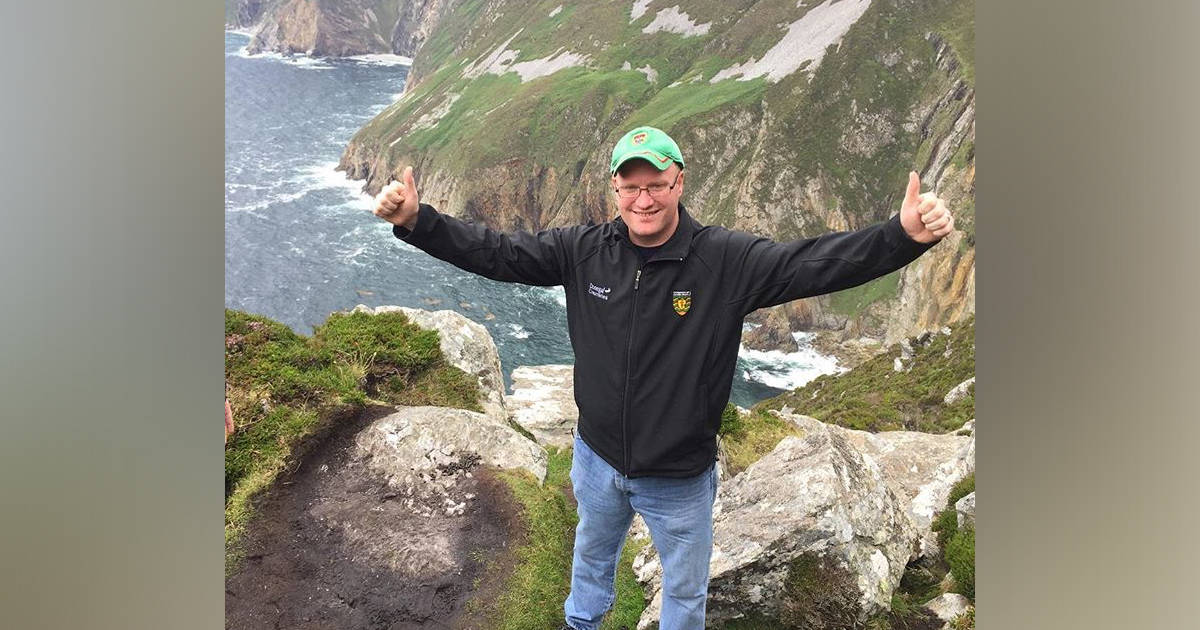