Christendom College’s student body, faculty, and staff braved the cold and held an on-campus March for Life to prayerfully protest abortion on Friday, January 29. While the community was saddened to not be marching in Washington, D.C., this year, the college resolved to unite together in prayer for the unborn, resulting in a powerful statement for life.

“This is an unspeakable crime that is going on in our country and we want to bring it to a big stop,” said College President Dr. Timothy O’Donnell before Christendom’s March. “We are gathered here today with great joy, courage, and compassion, and you all manifest that. Thank you all for being here today.”

Christendom was set to lead the fourth-eighth annual March for Life before it was moved to a virtual format due to the ongoing COVID-19 pandemic and the risk of unrest in the nation’s capital. The college community quickly developed a plan to keep the spirit of the March alive on January 29, organizing on-campus events that would focus on prayer for the lives of the unborn.

To start Friday, students tuned in for the virtual Rally for Life, which featured an address from Student Body President Elizabeth Eller. Eller, a senior, previously served as the president of Christendom’s pro-life group Shield of Roses, organizing weekly prayerful protests at abortion clinics in the D.C. metropolitan area. In her address, Eller urged today’s youth to do everything they can for the pro-life movement. 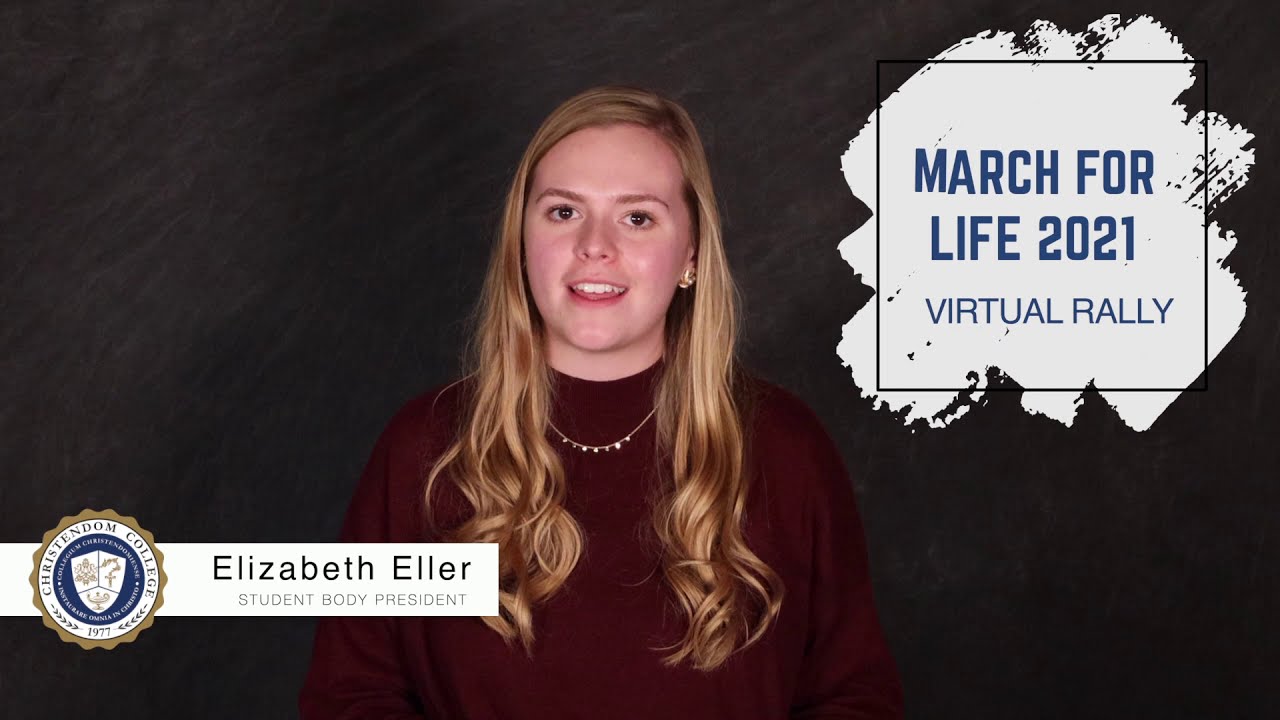 “A third of our generation is missing because they were not deemed worthy of their very own lives. With this in mind, I implore you—do everything you can to give a voice to those who don’t have their own,” said Eller. “We can and will be the generation that sees the end of abortion if we take responsibility and defend the unborn. Millions of lives depend on our actions.”

Following Eller’s address, the community gathered together outside for a march around campus. Students, faculty, and staff marched behind the college’s “Crusaders for Life” banner and prayed three rosaries before ending the march in front of the college’s Our Lady of Fatima Shrine, where flowers were laid in honor of the lives lost to the evils of abortion. A specially dedicated Holy Hour for Life was held immediately after, with Adoration continuing in the college’s Christ the King Chapel until midnight.

Christendom students have taken a stand for the unborn since the college’s founding, from taking part in the March for Life and leading it on four previous occasions (in 1984, 1998, 2009 and 2012) to organizing student pro-life groups, such as Shield of Roses and Students for Life.

Roses were laid in honor of the lives lost to the evils of abortion at the college’s Our Lady of Fatima Shrine.

“We have been created to be the voice of truth in this society of lies,” concluded Eller in her stirring address. “United for life we are strong, and each step we take together gets us closer to the end of abortion in America.”