“If you have something to say, don’t be afraid to say it. The world needs to hear your voice — the world needs to hear Christendom’s voice.” These inspiring words from author Suzanne Stanmeyer fired up an eager crowd of Christendom students at the first “Outside the Box” speaker series event of the semester this past week. Focusing on writing and publishing, the event featured both Stanmeyer and fellow popular author Regina Doman, who provided students with encouragement, inspiration, and more.

Both Doman and Stanmeyer have found success in the fields of writing and publishing over the course of their professional careers. Doman, who is a Catholic wife, mother, author, editor, and project manager, has published three children’s books, including the best-selling Angel in the Waters, five young adult novels, and two graphic novels, working with publishers such as Bethlehem Books, Sophia Institute Press, and TAN Books.

Stanmeyer shares a similar story, publishing three middle-grade children’s books, with more on the way. She launched her first book in 2016, and has become an expert on topics including sales platforms, writing to market, and pitfalls to avoid.

After conducting introductions, Director of Career and Professional Development Kristin Stephens interviewed both authors, first asking them how knew they wanted to pursue writing.  For Stanmeyer, even as a child she had the desire to bring people out of themselves and experience something good and beautiful.

“Books moved me as a child, and I just loved telling stories,” continued Stanmeyer. “I wanted to give people a way to get away from the everyday world.”

On the other hand, Doman first wanted to be an artist or be involved in theater, and saw writing as more of an afterthought. Her current career came about as a result of her choice at a young age to give her life to Christ after seeing just how hostile the world was to Him. This desire to serve Christ led her to Franciscan University, where she earned her degree in journalism.

Moving on, Stephens asked Stanmeyer and Doman how they make a living from writing. Stanmeyer answered the question first, saying that as an author it is possible but you have to be committed. 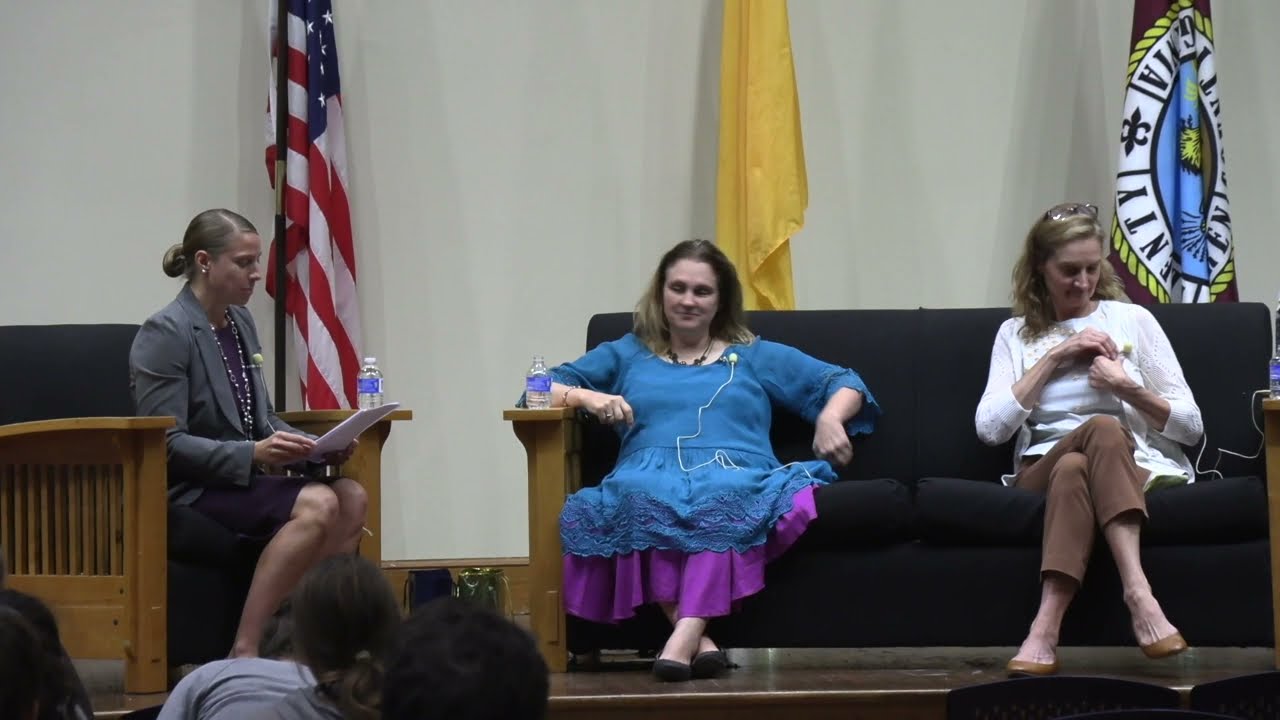 “It is hard, however there has never been a better time,” said Stanmeyer. “Success is not impossible in the writing field, but you have to work hard and it involves tons of reading.”

She encouraged students to pursue their interests in this field now while they have the time to do so. There are a lot of opportunities to get started now that do not involve a lot of risk because of Amazon’s on print demand with stories, according to Stanmeyer.

Doman emphasized that making a living in writing depends on what genre you are referring to.

“If you want to write fiction, you will probably need a day job,” said Doman. “If you are asking about writing in general, there are always ways to make money. There is constant demand, and a short supply of, people who can write well, clearly, and fast with little typos. If you have these necessary skills, you will find a job easily. You have to define what success means to you and always be prepared to be lucky.”

Stephens then asked how these two authors market their work and whether they do all the work themselves or go through a publishing company.

Stanmeyer answered first, saying, “When you go into writing, it is better to approach it as a business and you are the entrepreneur. Be professional and an entrepreneur.”

Doman expanded on that point even further, saying, “People respond to passion — find your passion and write about it.”

Stephens next asked what the best way is to start out within publishing and writing. Doman recommended working as an “assistant acquisition editor,” saying such a position would be helpful in learning to recognize good writing. In general, any writing experience, including writing articles for local newspapers or an internship writing for companies, would be extremely helpful for students.

Stephens followed up by asking if it is possible for students to start publishing their writings now.

Doman recommended the best time to submerge yourself in a writing career is the summer after college. Doman advised in that time after graduation to develop a writing habit and grow in discipline.

“If you feel a calling to write, I strongly encourage you to go into the chapel and consciously surrender yourself to God with no reservations and he will lead you…allow your Heavenly Father to guide and lead you to be the light,” said Doman.

Find out more at career.christendom.edu.

This story was contributed by Ashlianna Kreiner (’22).