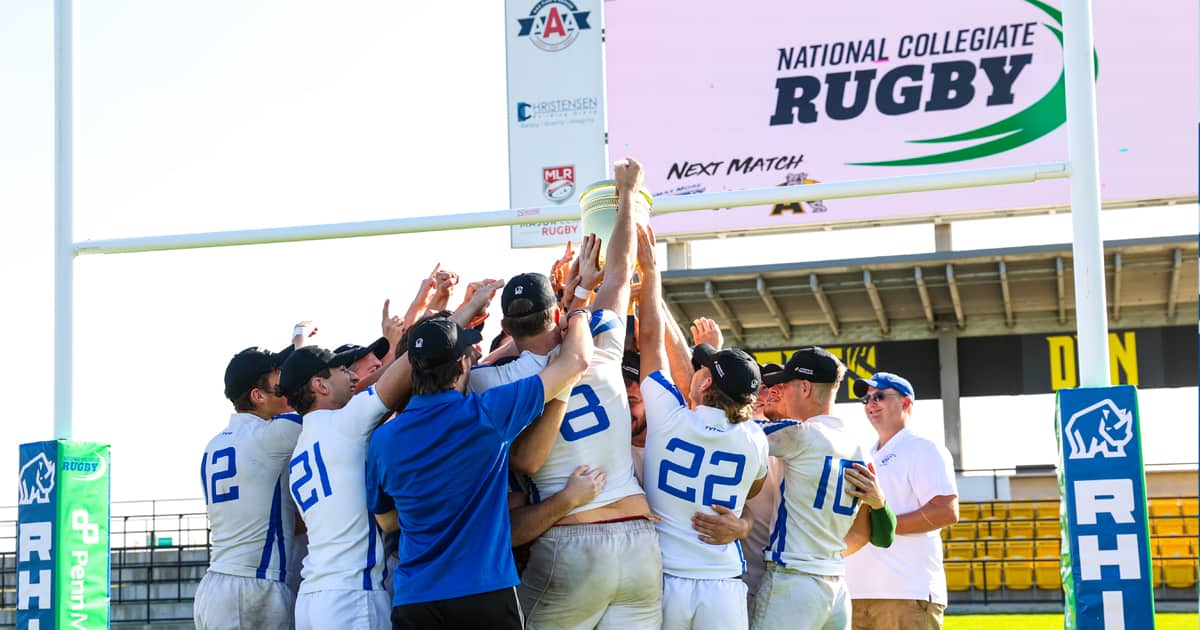 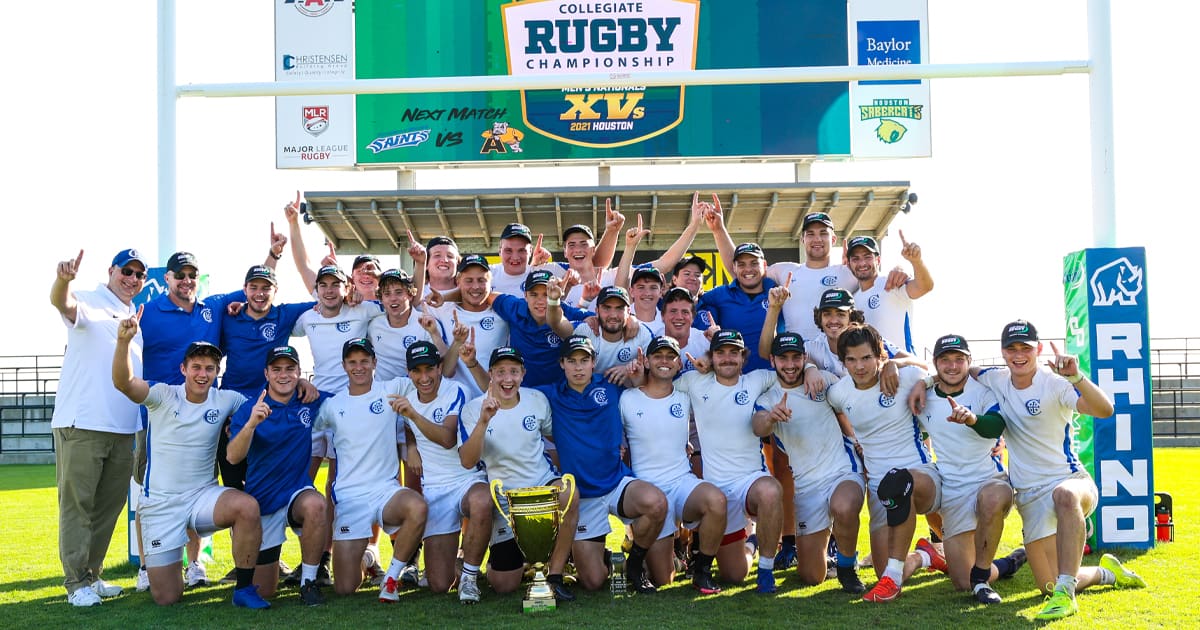 The road to the National Championship game in Houston began before the season even started for Christendom, when National Collegiate Rugby (NCR) awarded them the #1 ranking in the pre-season rankings. That ranking brought with it enormous expectations for Christendom’s players, but they lived up to them again and again throughout the regular season, ultimately going 7-1.

Led by team captain Owen Kennedy and all-star performances from Matthew Westin, Thomas Santschi, Hugh Wingate, John Ascough, and others, Christendom qualified and fought their way through multiple rounds of the playoffs to make it to Houston, including winning a Conference and Regional Championship. 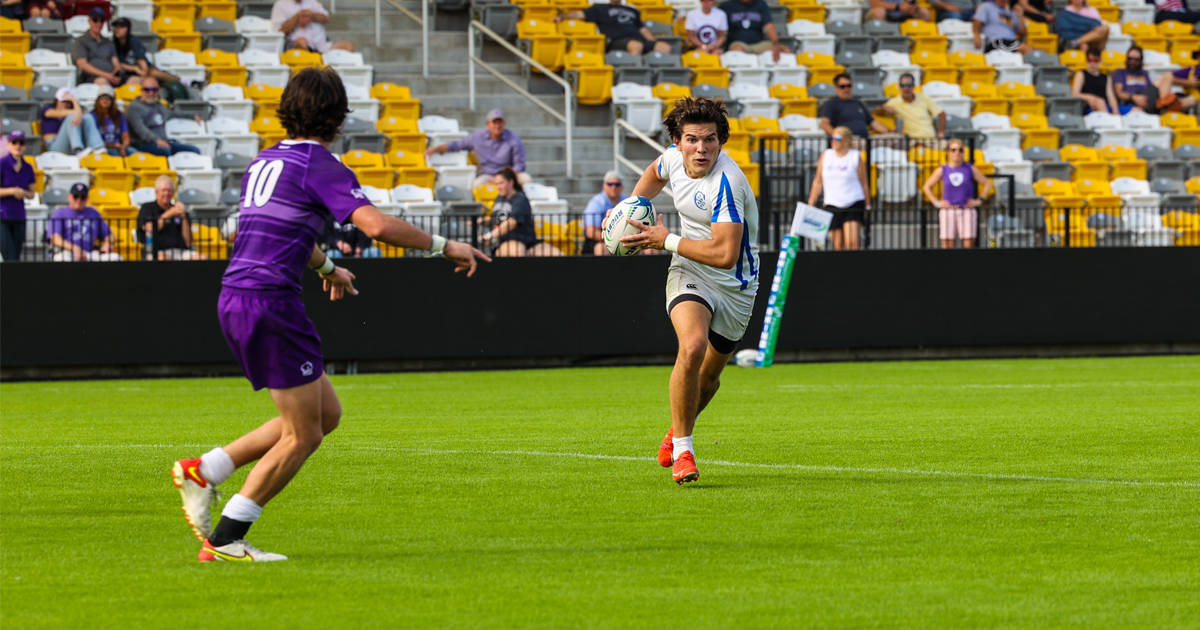 Matthew Westin was a huge force during the National Championship, scoring two key tries for Christendom.

All of the physical and mental effort put them just two wins away from a National Championship, with #6 Holy Cross standing between them and the National Championship game. As Christendom took their positions in Aveva Stadium, they immediately faced another huge opponent: wind gusts reaching up to 35 miles per hour. The stingy conditions proved to be the least of Christendom’s problems in the first half, as Holy Cross poured points onto the board, going up 29-0 within the first twenty minutes of the game. That huge deficit marked the lowest point of the season for Christendom — a hole that would be enough to mentally crush other teams. But Christendom refused to bend. 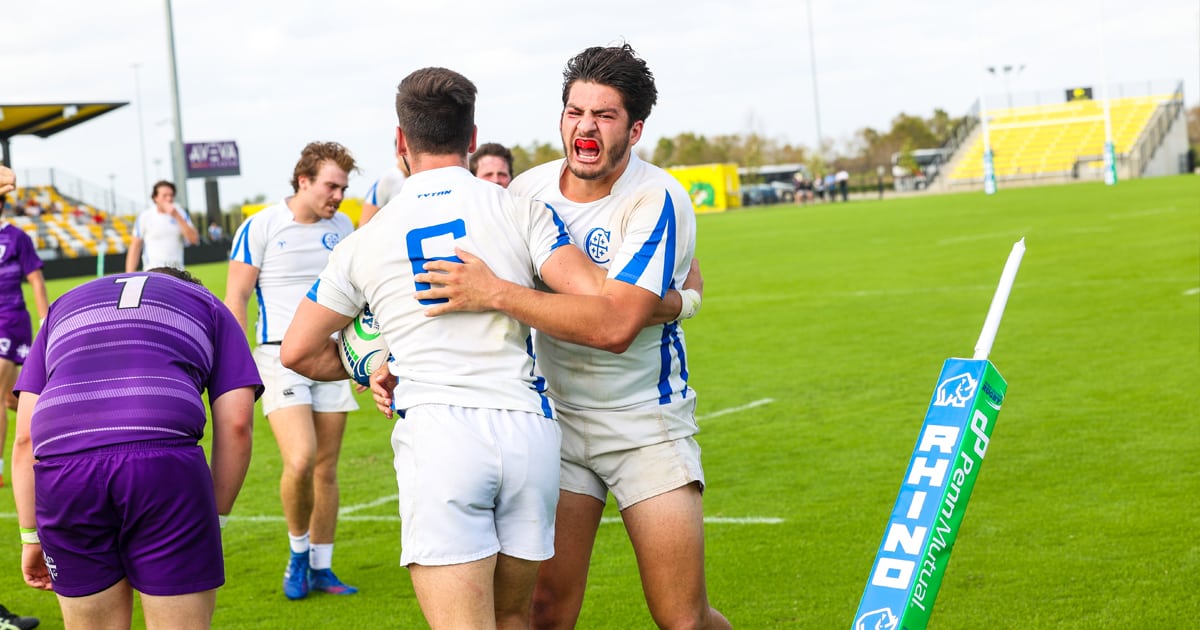 Matthew Westin gave Christendom their first sign of hope, scoring a try to put Christendom on the board. Three tries later, Christendom brought the game to 29-20 at the half. With the momentum firmly swung their way, Christendom began pounding the Holy Cross defense with drive after drive down the field. Santschi scored the first try of the half, with Wingate scoring soon after to give Christendom their first lead of the game. Ascough and Andrew Mead scored twice for Christendom as well, with the team scoring 44 unanswered points before Holy Cross would finally score again on the final drive of the game. By that point, it no longer mattered — Christendom pulled off the incredible comeback 44-34 win with their backs against the wall, sending them to the Cohen Cup Championship game on Sunday.

In a marked difference from Friday, Christendom walked into Aveva Stadium to find blue skies and perfect rugby weather on Sunday. Each player felt the energy in the air as they took the field against #3 New Mexico Tech, who outlasted #2 St. John’s on Friday night to reach the National Championship game. 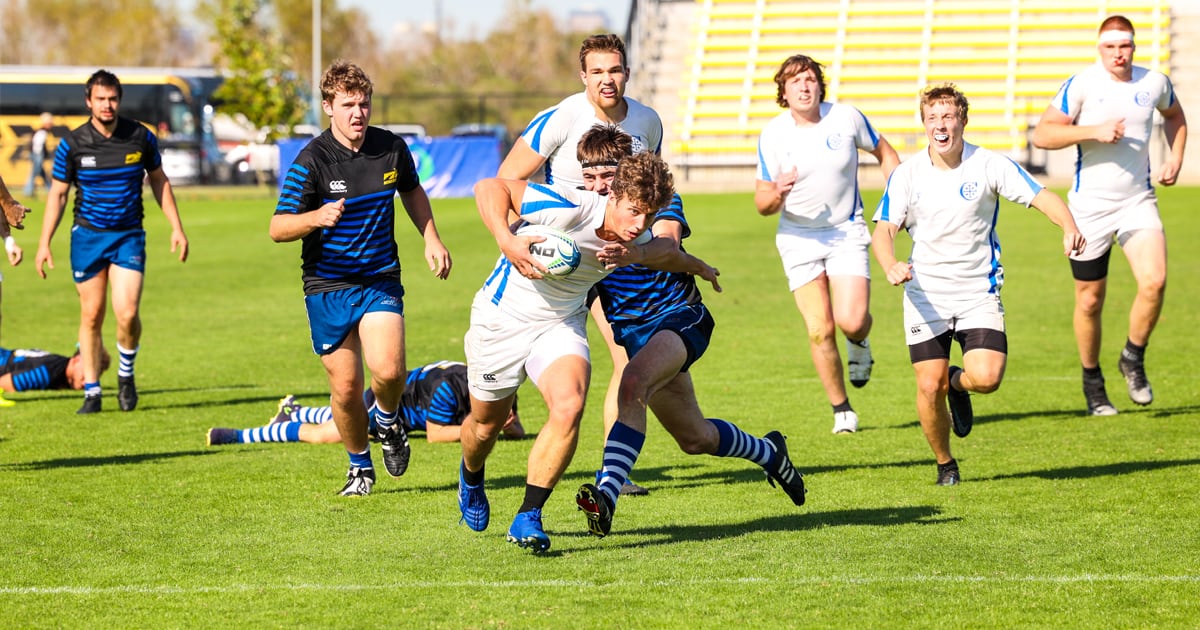 Christendom refused to let the biggest game of the year begin the same as the semifinal matchup, with Wingate scoring first to start the game. New Mexico, however, refused to yield either, scoring back-to-back tries to go up 10-5 over Christendom. The staunch Christendom defense held New Mexico from there in the first half, with Westin, Owen Kennedy, and Christopher Usher all scoring for Christendom, putting them up 24-10 at the half.

With only forty minutes standing between them and a 15s National Championship, Christendom went to work on holding off New Mexico. The Miners, however, entered the second half hungrier than over, pushing down the field again and again. The score began to change, from 24-10, to 24-17, to finally a tie game with only ten minutes to go. 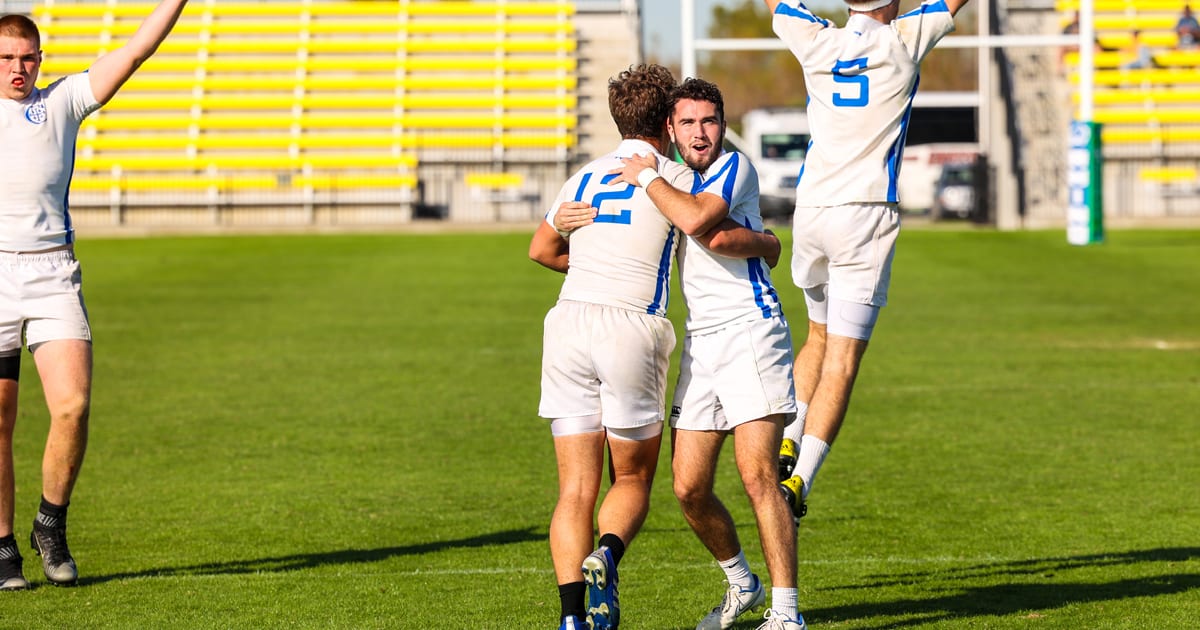 As fans for both teams screamed from the stands, New Mexico managed to punch through Christendom’s defense to score with only four minutes left in the game. Christendom again found themselves with their backs against the wall. Again, they refused to bend.

Wingate led Christendom down the field, scoring a try to tie to the game with only a minute left on the clock. After receiving a kick, Christendom charged down the field again, before the game’s referee informed both teams that the next drive would be the final of the game. With that knowledge in hand, Christendom left everything on the field in the final minute, pushing themselves inch by inch down the field. Finally, the ball came to team captain Owen Kennedy on an assist from his brother, John. With five men piling on Kennedy, he pushed ahead, willing himself over the try line for Christendom and for victory. Final score: Christendom 34, New Mexico Tech 29. 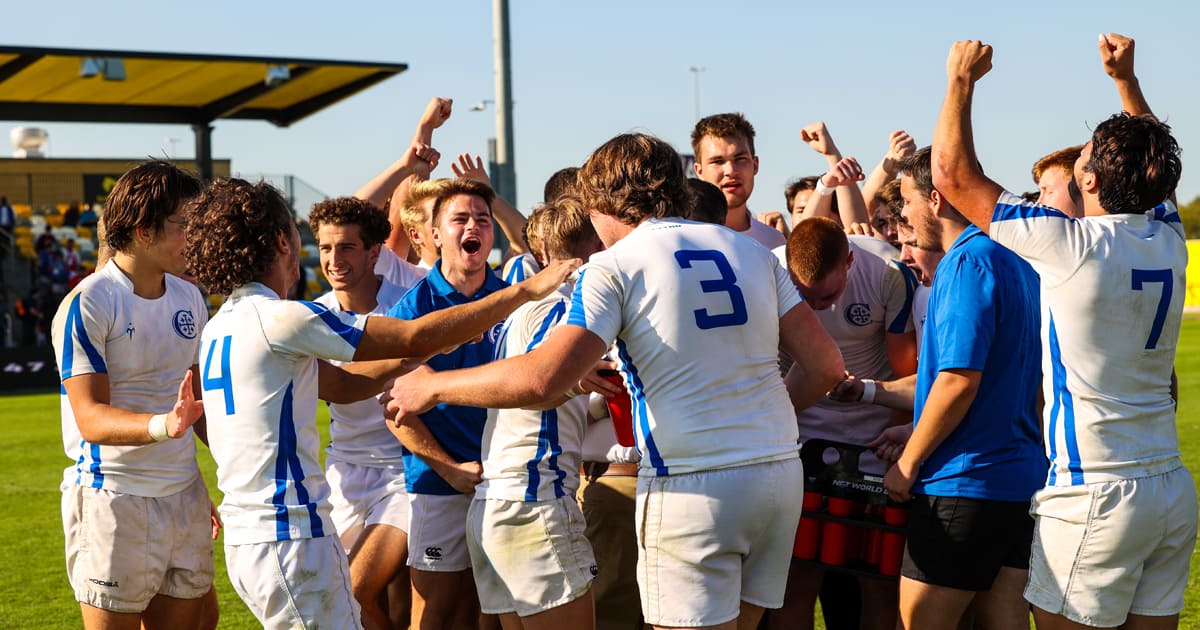 Kennedy was named tournament MVP for his efforts over the course of the two games for Christendom, with other members of the team named to the All-Tournament team as well. The victory also marked the eighth straight win for Christendom to close their fall season. 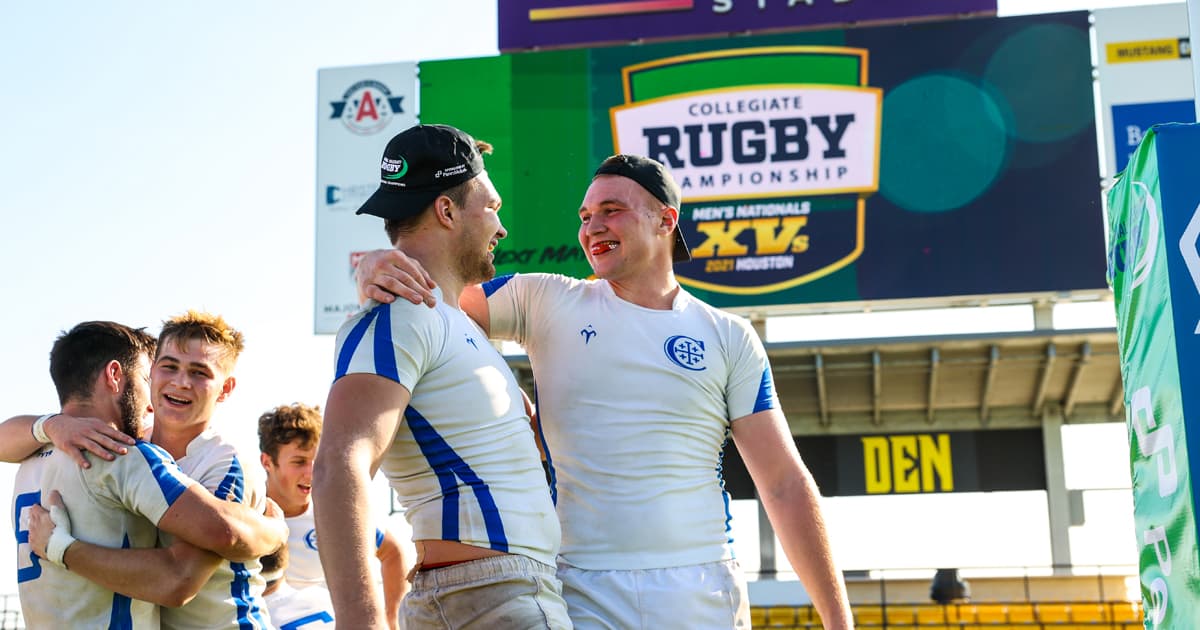 Over the past five years, Christendom has emerged as one of the top rugby schools in the country — even while simultaneously competing as the smallest school in National Collegiate Rugby by a wide margin. That fact makes their accomplishments even more stunning, with multiple tournament wins, #1 national rankings, and now two National Championship titles to show for their hard work and perseverance.