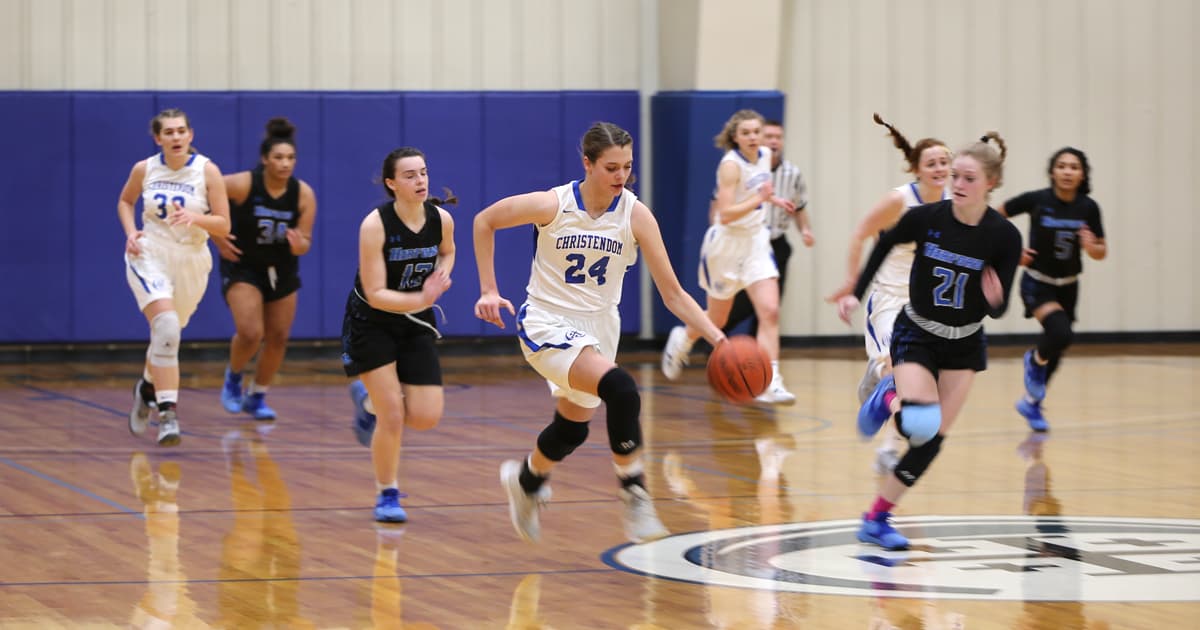 Christendom’s women’s basketball team picked up their eleventh win of the season on Saturday, defeating Regent University 59-44 — their fourth straight win and sixth overall this month. The men’s basketball team, meanwhile, split their weekend set, picking up their eighth win against Crown College on Friday but falling to Regent on Saturday on the road.

The women’s basketball team continued their incredible 2022 performance this past week, defeating Regent University and Frederick Community College before taking on Regent a second time on Saturday. Christendom dominated in the first half of the game, putting up 35 points to Regent’s 17. Regent mounted a tight comeback in the second half, outscoring Christendom 27-24, but Christendom managed to hold on for a 59-44 win. Catherine Thomas again led Christendom in scoring, putting up a 24-12-5 stat line by the end of the game.  Miranda Keller also scored a double-double with 14 points and 11 rebounds, continuing her strong inaugural season for Christendom.

The win gave Christendom a 6-1 record in the month of February and an 11-4 record overall going into their final week of the season.

On the men’s side of the court, Christendom finally concluded their five-game homestand against Crown College on Friday, looking to bounce back from back-to-back losses earlier in the week. The first half was hard-fought for both teams, with Christendom and Crown trading shots before closing the half 49-43, Christendom. The second half, however, proved to be an entirely different story. With Christendom’s defense holding Crown back, the offense poured on the points, with John Paul Vander Woude scoring 22 points in the second half alone and 32 points overall. Christendom ultimately won 109-59, putting up sixty points in the second half. Peter Ethridge scored 27 points and made 11 rebounds, while Owen Kennedy put up his own double-double with 17 points and 14 rebounds.

Saturday’s game delivered a tough loss to the men’s team after such a soaring win the night before, with Regent defeating Christendom 67-50. Christendom kept the game close throughout, but Regent was able to do just enough in the first half to hold a lead for the rest of the game. Vander Woude and Kennedy again led the way for Christendom, scoring 13 and 10 points respectively.

This week will bring the final games of the season for both the men’s and women’s basketball teams, with both teams playing their final home games on Wednesday before hitting the road to complete their seasons on Friday.