When Dr. Warren Carroll founded Christendom College in 1977, the primary goal of the college was to form lay apostles – well-educated, articulate Catholics who could take what they learned and how they lived into society and help restore the culture and lead others to Christ and, ultimately, to Heaven. As a result, Christendom alumni are involved in every career field possible, and no matter which line of work they choose, they are all focused on helping to restore all things in Christ.

For some Christendom alumni, the best way to do this is through missionary work. Alumni Ben Marsh (’19), Helena Briggs (’19), and Rosemarie Olszewski (’20) returned to campus on February 16 for the Career Development Office’s Life on Tap alumni mentoring event, talking to students about their trials and tribulations as missionaries, as well as their successes and rewards.

Marsh (’19), who served as a missionary with the Fellowship of Catholic University Students (FOCUS) from 2019-2021 at Assumption University and now works at Christendom College as an Admissions Counselor, said that, while in college, he felt called to work in think tanks or in Congress, influencing public policy changes in the United States. But after he attended FOCUS’ (the Fellowship of Catholic University Students) SEEK 2019 conference and had the opportunity to talk to missionaries, he had a whole new perspective on life.

“I realized that before there could be big changes in government and policy, there had to be a small change in the hearts of people,” explained Marsh. “This gave me meaning for missionary work.”

Briggs (’19) followed on Marsh’s response by explaining that there was not just one moment but several moments that led her to a life of mission, especially volunteering during Christendom’s spring break mission trips. Briggs is now a missionary outreach coordinator for Catholic Sports, seeking to build an authentic community of young adults through recreational sports, and through that community bring others closer to Christ.

“During my time at Christendom, I went to Honduras,” said Briggs. “This was my first real inclination of truly serving my brothers and sisters in Christ. People reached out to me afterwards and told me that I had a missionary heart. Since becoming a missionary, I can easily say it has been the most fulfilling thing I have done in my life.”

“I knew for a long time that I wanted to pursue missionary work after college,” she said. “I went on mission trips and participated in Mother Teresa’s Children, a student-run club to minister to the homeless. After a while, I knew that missionary work was what I wanted to do. As a senior, I searched for an organization that would work for me. Simple House was the place I found that fit me best — they love the homeless in a very special way.”

Talking about the day-to-day events in a life of a missionary, each had a unique understanding and answer.

“There is no same day,” said Marsh. “Day-to-day is usually unpredictable because, as a missionary, you are sharing your whole life with the people that you serve. You are, in a very real way, teaching them how to live an integrated Catholic life. You are always making connections and meeting new people.”

The guest speakers gave the students some ideas of how to best prepare to be a missionary.

“The mission trips were huge — going on the Peru mission trip was life-changing for me,” said Olszewski. “Working with the college’s Student Activities Council further helped me learn event planning and preparation. Knowing how to cook in bulk and having an idea what you would need, and the cost, helped me to plan events that were reaching people in their homes during COVID in 2020.” 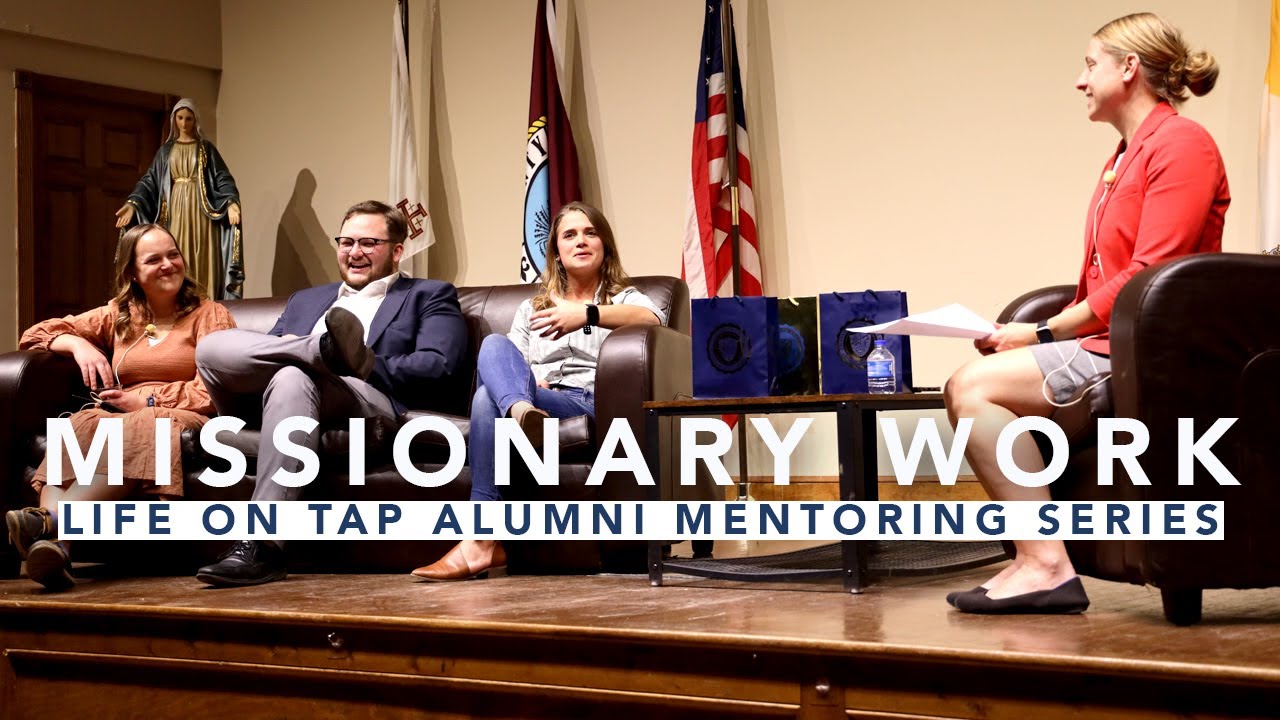 “People at Christendom don’t realize how other people don’t have that opportunity [at college],” said Marsh. “Just being able to live in a Catholic culture is such an amazing opportunity for formation to become a missionary. When I did my training for a missionary, we had daily Mass and prayer and for many people this was radical.”

According to Briggs, it’s important to remember that 90% of conversions do not happen through doctrinal debate but through the example set by one’s own deeply Catholic life, and Christendom’s educational experience was very beneficial in this.

“Graduates of Christendom are equipped to evangelize. They know the primaries and the proofs, but it is really important to know what matters,” said Briggs. “Our mission is about introducing people to our best friend, who is Jesus Christ. At Christendom, you get the opportunity to know Christ through class, Scripture, and the sacraments.”

Marsh agreed with Briggs’ recommendations and further stressed the need to focus on forming a strong prayer life and the ability to debate well with others while at Christendom.

“You have no idea how great your education is until you go out into the world,” concluded Marsh. “The Catholic culture at Christendom seeps into you. The formation at Christendom is like having a first aid kit to help heal wounds. A healthy habit you can start learning at Christendom right now, in addition to forming a strong prayer life, is to learn to have good arguments and learn how to not feel personally attacked when your views are attacked.”