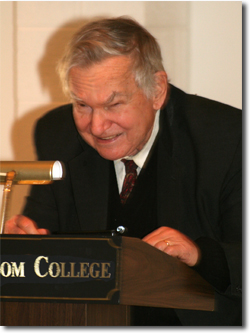 Christendom College’s Founding President Dr. Warren H. Carroll delivered a lecture entitled, “The Conversion of Danton in the French Revolution” to the college community on February 25. The lecture is part of a series of history lectures being held this spring.

“The conversion of Georges-Jacques Danton, leader and maker of the French Revolution is the greatest of all conversion stories,'” Carroll said at the beginning of his lecture.

“As the revolution began, Jesus Christ watched from His throne in Heaven, knowing that this man was about to loose the Devil on his city and on his people. But Christ was to reclaim this sinner and evildoer, and He did,” he said.

A convert to Christianity himself, Carroll was educated at Bates College and received a Doctorate of History from Columbia University. After founding Christendom College, he served as the College’s president until 1985 and then as the chairman of its History Department until his retirement in 2002. He is the author of numerous historical works including The Rise and Fall of the Communist Revolution, The Guillotine and the Cross, and his major multi-volume work The History of Christendom.

The lecture focused on Danton’s role in the beginning of the French Revolution, his hand in the many bloody massacres, and his sudden conversion brought about by his love of Louise Gély, a devout Catholic.

Commenting on the reluctance of Louis XVI to be king at this tumultuous time in history, Carroll said “When you study him in history you constantly want to take him and shake him by the shoulders and say ‘Get with it! Get real!’ But you can’t do that. He was probably one of the weakest characters in all of history.”

It was Louis XVI who ordered his protectors, the Swiss Guards, to lay down their arms, which resulted in the killing and mutilation of the guards by revolutionaries. “Many French, even many Americans, glorify this revolution. I defy any Christian to read or hear an accurate account of the events of August 10, 1792, and not feel the presence and active malevolence of the Father of Evil and Lies. And the author of it all, as we have seen, was Danton,” Carroll said.

“Danton asked Louise Gély to marry him.” Carroll continued. “It was a grace-filled moment like few in the world has ever seen. For she said yes, on two firm conditions: Danton must first go to confession and the priest who was to witness the marriage must be one who had not sworn allegiance to the schismatic church the Revolution had established. And Danton agreed to both conditions.”

Danton was beheaded at the guillotine. “Danton was dead—the Revolution and the Terror went on. We have good reason to believe that repentance and expiation had saved his soul. For Jesus Christ will save repentant souls up to the very edge of death. The Cross vanquishes the guillotine,” Carroll concluded. “On April 5, 1794, there was great rejoicing in Heaven, for Georges-Jacques Danton, who had been lost, was found. So pray for your enemies, even the worst of them.”

Two more lectures remain in the series: “Senator Joseph McCarthy of Wisconsin” (March 31), and “Alexander the Great” (April 28). Each talk is held in the chapel crypt and begins promptly at 4:00 p.m.

You can listen to this evocative lecture at Christendom on iTunes U.