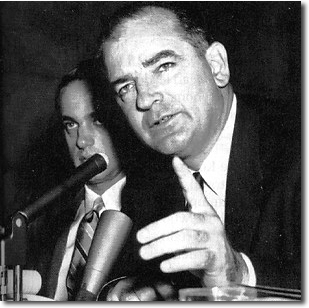 Christendom College’s Founding President Dr. Warren H. Carroll delivered a lecture entitled, McCarthy: the Myth and the Truth to the college community on March 31. The lecture is part of a series of history lectures being held this spring.

“If you are Catholic and have believed any of the slanders against McCarthy, you should know first of all that Senator Joseph McCarthy of Wisconsin was a loyal Catholic who was buried with a rosary around his neck,'” Carroll said at the beginning of his lecture. “Surely such a man deserves at least a hearing before the tribunal of your soul before you condemn him on hearsay evidence.”

Carroll said that Arthur Herman, a professor at George Mason University, wrote the only biography that corrects the lies and distortions about the senator, Joseph McCarthy: Reexamining the Life and Legacy of America’s Most Hated Senator.

The lecture focused on McCarthy’s role in the Cold War, his anti-communist crusade, and the Army-McCarthy Senate hearings that led to his demise.

Carroll explained that the communist threat, which McCarthy fought against, was real. “Today we know better,” he said. “Archival materials from the former Soviet Union have revealed that Stalin’s intentions were aggressively malign and expansionist, just as America’s coldest cold warriors had believed.”

It was McCarthy’s temper that got him in trouble, Carroll said. “Joseph McCarthy was a working man’s Catholic. He was dark and heavy, and he drank beer—too much of it, dying of cirrhosis of the liver. He was loud and uncouth. He denounced his critics like a barroom bully… worst of all—to the liberal left—he named names.”

His rough personality came to light during the televised Senate hearings where three particular issues raised by the lawyer Joseph Welch brought McCarthy down, Carroll said. A cropped photograph, a purloined letter, and, finally, the Fred Fisher incident.

Carroll explained that McCarthy accused Fisher, a member of Welch’s staff, of being a communist—a fact that had been printed in The New York Times days before. Welch made a dramatic display accusing McCarthy of being reckless and cruel, weeping openly in front of the television cameras. Public opinion and the media turned against McCarthy. Fisher’s career never suffered, and the Senate censured McCarthy, Carroll said.

“The next time you hear someone denouncing Joe McCarthy, tell him about Arthur Herman’s book, which the vehemently anti-McCarthy media will never mention nor acknowledge,” Carroll said. “Perhaps you may help to make him no longer America’s most hated Senator.”

A convert to Christianity, Carroll was educated at Bates College and received a Doctorate of History from Columbia University. After founding Christendom College, he served as the College’s president until 1985 and then as the chairman of its History Department until his retirement in 2002. He is the author of numerous historical works including The Rise and Fall of the Communist Revolution, The Guillotine and the Cross, and his major multi-volume work The History of Christendom.

One more lecture remains in the series, Alexander the Great (April 28). Each talk is held in the chapel crypt and begins promptly at 4:00 p.m.

You can listen to this insightful lecture at Christendom on iTunes U.