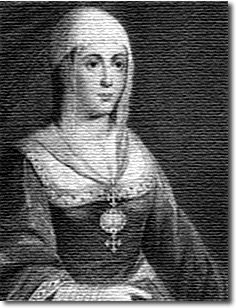 Christendom College’s Founding President Dr. Warren H. Carroll delivered a lecture entitled, Isabel of Spain: The Catholic Queen to the college community on April 28. The lecture, which was based on his popular book of the same title, concluded a series of history lectures held this spring.

“Queen Isabel was the greatest woman ruler in history and made her country of Spain the supreme power in the world of her time,” Carroll said at the beginning of his lecture.

“She is Spain’s national heroine. She sent Christopher Columbus on his epochal voyage of discovery across the Atlantic Ocean, where he found America and thereby changed history. The Pope gave her the title la Catolica, which means ‘the Catholic.’ All her life she was a woman of profound humility and prayer,” he said.

A convert to Christianity, Carroll was educated at Bates College and received a Doctorate of History from Columbia University. After founding Christendom College, he served as the College’s president until 1985 and then as the chairman of its History Department until his retirement in 2002. He is the author of numerous historical works including The Rise and Fall of the Communist Revolution,1917: Red Banners White Mantle, and his major multi-volume work The History of Christendom.

The lecture focused on the many great moments of Isabel’s life—a life worthy of canonization, according to Carroll.

He explain that “her contemporaries uniformly and repeatedly testified to her extraordinary virtues, as have most historians since, Catholic or secular. Even those who vehemently disagree with some of her policies (such as her establishment of the Spanish Inquisition) cannot deny her spotless moral integrity, the harmony of her life with her faith, and the justice and benevolence of most of her rule.”

Carroll spoke of the many challenges that Isabel faced not just as queen, but also as a mother. Her only-son died young and her eldest daughter died at childbirth. Her second daughter went insane. “The succession of tragedies was Isabel’s cross,” Carroll said, “which she carried as true Christian.”

“Studying the life of Queen Isabel will inspire your children, because her life shows that in the midst of a corrupt culture, a person of virtue and determination can change history.” Carroll said.

“Isabel’s life and virtues have special importance in an age like ours,” Carroll concluded. “Her achievements as a woman will surely appeal to an age, which is giving special emphasis to the scope of women’s potential to contribute to society… Her care and concern for foreign peoples of different race should appeal greatly in an age, which has lavished care and concern on such people. Yet the memory of Isabel must be as incompatible with compromise on any fundamental tenet of Catholic faith and morals as Isabel herself would have been.”

You can listen to this evocative lecture and all previous lectures at Christendom on iTunes U.