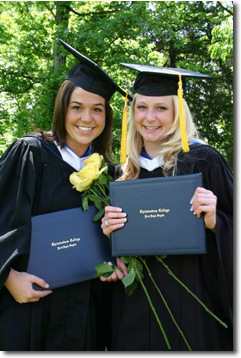 On May 10, Christendom College conferred 95 Bachelor of Arts and two Associate of Arts degrees on its graduating class of 2008. His Eminence Seán Patrick Cardinal O’Malley and Dr. Ralph McInerny joined the graduates for commencement weekend. Cardinal O’Malley offered the Baccalaureate Mass on Friday, May 9, and delivered the homily.

“It is a great joy and privilege for me to back here with you to celebrate Communion at this Baccalaureate Mass and to see how God has blessed this wonderful institution,” Cardinal O’Malley said in his homily.

“The one who believes is never alone,” Cardinal O’Malley said quoting Pope Benedict XVI. “Today at Christendom we feel that so clearly. We are not alone. Christ the Good Shepherd is with us. Peter is with us. We have a throng of witnesses of brothers and sisters and together we will follow Christ who is the way. Not at a safe distance, but up close in the danger zone—at ground zero.”

Cardinal O’Malley is an American prelate of the Roman Catholic Church. He currently serves as the Archbishop of Boston, and was elevated to Cardinal in 2006 by Pope Benedict XVI. O’Malley is also a member of the Order of Friars Minor Capuchin, more commonly known as the Capuchins. In 1988, O’Malley attended the Commencement Exercises at Christendom College. In 1998 John Paul II appointed O’Malley to the Special Assembly for Oceania of the Synod of Bishops.

Following the Mass, graduates and their families were treated to a lovely outdoor reception in Piazza San Lorenzo, the square in front of the St. Lawrence Commons. All enjoyed cocktails, music and the spring air. Afterwards, graduates and their parents were served an elegant dinner prepared by College Chef Ron Steckman and his staff, at which members of the faculty and administration were present.

On Saturday morning, the Class of 2008 processed across campus led by the triumphant song of the bagpipes to Crusader Gymnasium where the commencement exercises were held.

Salutatorian Jane Finlay of Virginia welcomed all to the ceremony and spoke of how Christendom has prepared the graduates to face the challenges that await them in the world.

“Our future, my fellow graduates, is indeed full of possibilities. Most of us do not yet know what paths Christ is calling us to. We cannot know what the future will bring us. But from this garden of possibilities we may pluck one certainty: the world we go into is a dangerous and even hostile world. It will not praise us. It will not love us. It will neither value nor understand what we have achieved here. Yet this should not make us afraid,” she said.

Finlay concluded, “As we go forth from Christendom to be a light to the nations, we can be happy and confident that…Christ will conquer. Christ has already conquered.”

“It’s a great honor to be here,” Cardinal O’Malley said in his remarks. “When you’re a bishop you get a lot of honorary degrees…but I can not think of any institution from which I am more pleased to receive a degree. This is truly a school born ex corde ecclesia and remains close to Christ’s heart, faithful to His Church and passionate about the mission we have received: to build a civilization of love and instaurare omnia in Christo.”

“The freedom we hear most about when it comes to higher education is academic freedom,” McInerny said in his address to the graduates. “It has come to mean that just anything has right of access to the campus and curriculum. This used to be justified on the basis that ideas would be weighed analyzed and appraised… There is something to be said for academic freedom, in this sense, but only so long as institutions of higher learning are founded on the notion that some ideas are true and others false, and that assumption, in turn, assumes that there objective principles of appraisal.”

At the end of his address, McInerney said, “We call this day a commencement, not an end. What you have begun here must characterize you lives in the years ahead. Youth, it has been said, is wasted on the young. Disprove that, by the way you live.”

All in the gymnasium rose in standing ovation for long-time defender of Catholic Faith in American higher education.

Following this presentation Valedictorian Meredith Wilson of Pennsylvania expressed her classmates’ affection for the college and the importance of St. John the Evangelist Library, which opened its doors the same year they were freshman.

“When we came here,” she said, “we knew there were dangerous errors and profound truths, but applying the truths to refute the errors faced us as a great challenge. In the library we have met that challenge. Through considering the greatest minds, our own minds have matured. We know logic, enabling us to see irrationality for what it is. We can withstand specious emotional appeals. We know the principles of St. Thomas Aquinas, grounding our consideration of philosophy and politics. Most importantly, we know the Faith and we know how reason supports it. We have the tools to recognize error.

“We know the Truth—let us bring it to our neighbors. We have come together to fill ourselves with the love of God and His creation—now let us carry that love with us as we begin new tasks. Society is lost, but we know the way. Society is sad, but we have joy. Like St. John, we seek Truth with hope, equipped to recognize it and spread it. Faithful to the Church, let us go to restore all things in Christ,” she concluded.

“My charge to you today…continue to seek to find [Christ],” he said. “Find Him as you already have in many ways. And in becoming like him, you will assist in the redemption of the world. Bearing witness in our wounded world to the hope and love that are within you.”

Quoting Edith Stein, O’Donnell said, “To suffer and to be happy although suffering. To have ones feet on earth—to walk on the dirty and rough paths of this earth—and yet to be enthroned with Christ at the Father’s right hand. To laugh and to cry with the children of this world and ceaselessly to sing the praises of God with the choirs of angels. This is the life of the Christian until the morning of eternity breaks forth.

Following the ceremonies, family, friends, and students were treated to a delightful reception in the St. Lawrence Commons. Later that evening all returned to a wonderfully decorated Commons for one last dance, with music provided by a live swing band, The Yesterday Swing Orchestra.

The Cardinal’s homily and all addresses from commencement can be downloaded at Christendom on iTunes U.