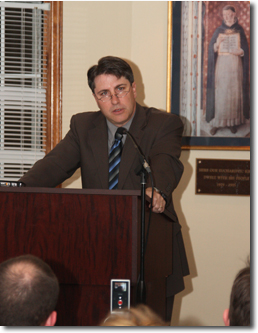 The lecture was hosted by Christendom College’s Cincinnatus League with funding provided by The Intercollegiate Studies Institute and the Leadership Institutes’s Revitalize Our Conservative Knowledge (ROCK) on American Campuses Grant.

“It’s very interesting to be at a place where [conservative thought] is not an isolated movement on campus, but is the campus,” Deneen said at the beginning of his lecture.

Contrastingly, the Anti-Federalist sought to promote first “the theory of virtue instead of individualism, second, a sense of political liberty—liberty not achieved through private interest, but through public devotions and activity—and third, they urged a type of common sense knowledge, knowledge that was lodged broadly and widely among the populous,” he said.

The Federalists drew upon the early modern state of nature theorist like Machiavelli and Hobbes, who rejected the teachings of the ancients and Christian thinkers.

Deneen said that the candidates of both parties that we currently elect agree fundamentally with Federalist leader Alexander Hamilton.

“There is not a candidate out there, except for Ron Paul—you saw how far he got—who is not opposed to growth economy, who raises questions about the logic of an economy that grows without limit, who would question America’s military predominance and the necessity to defend it, who would oppose the creation of the national bank. Imagine. On these fundamental issues we have one party system,” he said.

“In the issues where we do find our parties to be different? I think we need to ask ourselves, ‘are the things we value most dearly—issues, which I am sure here pertain to issues of life—are these things undermined by the very fundamental Hamiltonian commitments of a large commercially very prosperous, liberating, very mobile, luxurious state that is defined above all by choice?

“How can we just wall off this one sphere—’okay, this is where you can have no choice’—when there is a choice in everything? When the motto that defines us best is ‘just do it’? Is this not a question of a certain kind of culture… and the kind of politics that helps to form that culture,” he asked.

This fascinating lecture can be downloaded at Christendom on iTunes U.