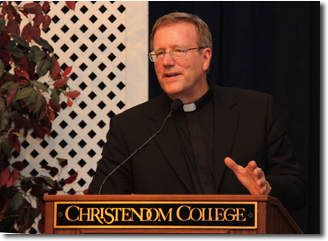 “All my life I’ve heard spirited advocacy for the dialogue between the Church and the wider culture, but this call has come, almost exclusively, from the Church and not from the culture,” Fr. Robert Barron said in his talk entitled “From Correlation to Assimilation: A New Model for the Church-Culture Dialogue” given to the students and faculty of Christendom College on April 20. “It is this one-way quality of the conversation that is, I submit to you, problematic.”

Fr. Robert Barron, a prominent theologian and podcasting priest, is one of the world’s great and most innovative teachers of Catholicism. His global media ministry called Word on Fire has a simple but revolutionary mission—to evangelize the culture. His numerous books and essays serve as critical educational and inspirational tools for seminarians, priests, parishioners and young people worldwide.

Fr. Barron explained that this one-way conversation, coupled with a false humility, results in “a Catholicism that is too culturally accommodating, excessively apologetic, shifting and unsure of its identity.”

Barron highlighted problems within American culture as well its redeemable strengths. Problems which the Church will encounter in communicating with American culture include an Hobbesian individualism, the notion of freedom as choice, and the privatization of religion.

“Authentic Christianity can never be privatized precisely because it speaks of the Creator God who grounds and rules all finite things,” Fr. Barron said. “This means that all areas of life—the public and the private, the social and the individual, the natural and the conventional—belong to God and are related to God.”

“The great Catholic tradition knows that when the connection between positive law and natural law is severed, totalitarianism, of either left or right, follows,” he said. “Therefore, this rich American instinct that government should be limited and disciplined both from without and from within is something that the Church can very much assimilate to itself and adapt to its purposes.”

Fr. Barron proposed that the Church be assimilating—not defensive or acquiescent, but capable of rejecting what it must and taking what it can. This “assimilating Church” is inline with the teachings St. Augustine, St. Thomas Aquinas, Cardinal Newman, and the Second Vatican Council, he noted.

“St. Paul told us that, in Christ’s light, we should test every spirit, rejecting what is bad and retaining what is good. He also instructed us to bring every thought captive to Christ,” he concluded. “The method that I’ve advocated honors those Pauline directives.”

This stimulating lecture can be heard at Christendom on iTunes U.