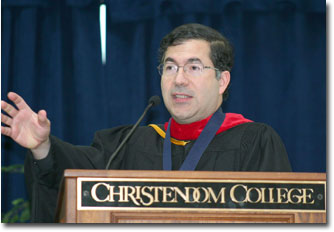 Rev. Pavone is one of the most prominent pro-life leaders in the world. Originally from New York, he was ordained in 1988 by the late Cardinal John O’Connor. He is a priest of the Amarillo Diocese and serves full-time in pro-life leadership with his bishop’s permission. He is the National Director of Priests for Life and has served as an official of the Pontifical Council for the Family at the Vatican. Norma McCorvey, the “Jane Roe” of the Supreme Court’s Roe vs. Wade abortion decision, called Pavone “the catalyst that brought me into the Catholic Church.”

“Every elected official on any level of government, who takes a position in which they fail to recognize and work for the protection of the right to life dishonors the very meaning of their office. Because you can’t be a public servant, if you fail to tell the difference between serving the public and killing the public,” he said.

Rev. Pavone told graduates that they were called to be courageous in the pro-life movement by responding to Christ’s challenge: greater love no one has than to lay down one’s life. Being pro-life means taking risks and making personal sacrifices.Pavone sighted Prof. Mary Ann Glendon who declined Notre Dame’s Laetare Medal as a great example of this.

“She was willing to lay down an honor—willing to lay down an earthly reward—for the sake of her friends, the unborn children; for the sake of her friends, the people in the Church she loves, who have been so scandalized, upset, angered, and furious at what is going on. She was not going to be used and she was not going to let earthly honors, titles, positions, privileges, or prestige turn her away from doing what is right,” he said.

On Saturday morning, the Class of 2009 processed to Crusader Gymnasium where the commencement exercises were held.

Salutatorian Joan Robinson of Virginia welcomed all to the ceremony and spoke of the unearthly treasures of knowledge and friendship, which Christendom gave to the students. She told her classmates that they must share these riches with a world run rampant with material and spiritual poverty.

Concluding, she told her classmates, “Now is our time to give knowledge and friendship. To go out into the desert as poor ones to the poor to be a vital part of the springtime of Christ.”

“I will have the profound privilege tomorrow to stand with the seniors of The University of Notre Dame in South Bend, Indiana, who are not going to their commencement because they don’t want to be part of a ceremony that obscures, rather than highlights the Church’s teachings on the defense of the unborn,” Pavone said in his remarks. “Let this institution of Christendom College continue to grow into what God has called it to be: one of the greatest institutions for Catholic learning in our country.”

Dr. Jude P. Dougherty then delivered the Commencement Address and was awarded an Honorary Doctorate in Humane Letters. Dougherty, the Dean Emeritus of the School of Philosophy at The Catholic University of America in Washington, DC, is the author of numerous essays, articles, and books including The Logic of Religion, Jacques Maritain: An Intellectual Profile. He is the recipient of many awards including the Knights of Columbus’ 2004 Outstanding Citizen of the Year.

“The world you are entering is not the world I entered at your age,” he began. “Yours is a far more destabilized world where few of the permanent things can be taken for granted. Confronted as you are with the intellectual and moral disarray of our secularized culture, the maintenance of your personal identity in an alien world may be one of your greatest challenges.”

Dougherty said that the world is currently trying to unify to the point of loosing national and cultural identity. One is at risk to being absorbed into a faceless international or multicultural cosmopolitan culture, he said.

“Most of us have been born in the west, in what used to be called ‘Christendom.’ It is not by accident that you are graduating today from Christendom College Over the past four years you have worked within a curriculum that reflects a distinctive culture, one that finds its roots in Jerusalem, Athens and medieval Paris.

“Given the disintegration of traditional western culture, those of you who are steeped in the faith will find your primary identity not as citizens of a cosmopolitan West, but as sons and daughters of a Church whose history, out of a sense of piety toward the inherited, you are obliged to master,” he concluded.

Following this presentation, Valedictorian James Tillman of West Virginia related the challenges that he and his classmates would face in the next part of their life.

“While we can expect God to bring our actions to fruition, in His time and in a way we may never see, we ourselves must still suffer. Our Lord can help us carry our cross, but we must still bear it. Like St. Paul we may complete in our own lives and bodies what is lacking in the inflictions of Christ. We could ask for no greater honor.”

Tillman noted that the world rejected Christ and so they also can expect to be rejected by the world. “If we too are not a sign of contradiction, then we do not deserve to rise with Him,” he said. “But if we suffer with Him as soldiers of Christ, if we take up our cross and follow Him with the martyrs, crusaders, priests, monks, and all the soldiers of the One True King, we too may cry, ‘Viva Cristo Rey!'”

Closing the ceremonies, College President Dr. Timothy O’Donnell delivered his charge to the graduates. O’Donnell spoke of the class’ deep regard for the Sacrament of Confession and encouraged them to share Christ’s message of mercy to the world.

“As you go through life there will be many opportunities to bring Christ and bear Christ’s forgiveness,” he said.

“In this year of St. Paul the Apostle, be reconciled to God, be His ambassadors, be His witnesses, let His peace reign in your hearts. You have freely received, now give and radiate that merciful love, and forgiveness to everyone that God puts in your life. Do that, and as St. Paul says, ‘you will shine like stars in the heavens’ in the midst of this generation. You will, in your own life and in the lives of every one you meet, help to restore all things in Christ,” O’Donnell ended his charge.

Following the ceremonies, family, friends, and students enjoyed a reception in the St. Lawrence Commons and later that evening returned for an evening of dance with music provided by a live swing band, The Yesterday Swing Orchestra.

Rev. Pavone’s homily and all addresses from commencement can be downloaded at Christendom on iTunes U.