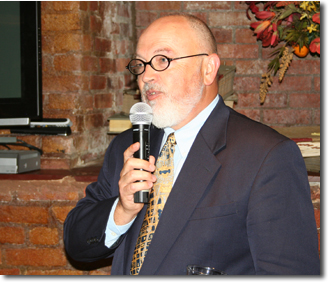 Author and architect Philip Bess delivered a fascinating lecture on “New Urbanism” to over 100 young conservative professionals and students on August 4 at the District Chophouse in Washington, D.C.

Bess, a Professor of Architecture and the Director of Graduate Studies at the University of Notre Dame School of Architecture, examined the philosophical foundations of architecture, relating Aristotelian and Thomistic natural law principles to traditional urban design.

Bess said that Athens, Jerusalem, and Rome were the foundation for traditional urban architecture. Athens taught that the good life is the life of moral and intellectual excellence and that a good city makes such a life possible for its citizens. Jerusalem taught that a city’s excellence is measured by the care it exhibits for it’s weakest members, while Rome taught that a city’s beauty is warranted by and represents its greatness.

“This ancient view of cities, though it acknowledged the central role of commerce, was essentially moral and aesthetic,” Bess said. “Today’s common wisdom is different, it views the city as governed by personal market forces and devotes little thought to the good life and to what relations cities might have to the good life.”

Bess’ lecture demonstrated that part of restoring society is restoring the physical and aesthetic part of society through good architecture.

“The leadership exhibited by our students in organizing such a successful event was outstanding, and reflects the depth of their convictions,” Christendom College Professor Bracy Bersnak said. “Truly, Christendom students are living out the Christendom motto—to restore all things in Christ—in Washington, D.C.”

Generous funding for the event was provided by the Intercollegiate Studies Institute (ISI), which has given much attention to Christendom students over the years by providing grants for lectures. ISI has also given scholarships and fellowships to Christendom students, including to recent graduate James Tillman, who won a $10,000 essay contest and attended the prestigious ISI Honors Fellowship.

The lecture was co-sponsored by Conservatism on Tap, a group of young, conservative professionals in the D.C. area, and the Cincinnatus League, a student group at Christendom College that seeks to provide a forum for discussion of conservative ideas and principles.

The lecture can be downloaded at Christendom on iTunes U.