Priests and Religious Aid Students in Discerning Their Vocations 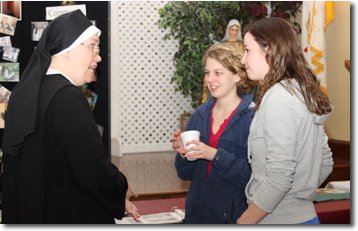 “We want God’s grace to grow in us. We want Him to work through us, but we cannot do that unless we surrender,” Christendom College Alumnus Fr. Tony Stephens told students and religious at the College’s annual Discernment Weekend held February 19-21. “We have to allow Him to work in our hearts.”

Fr. Stephens delivered the homily during Friday evening Vespers, which launched the weekend’s events. He told students that they should use this Lenten season to grow in humility.

“Be brutally honest with yourself and in confession,” he said. “Humility is the way to grow closer to God.”

On Saturday the St. Lawrence Commons was filled with priests and religious who were able to meet with students and explain their order and way of life. The afternoon featured a series of break-out sessions on discernment topics raging from “Marriage as a Vocation,” to “Life as a Nashville Dominican.”

“Seminarian Matthew Hoelscher’s talk was awesome,” Sophomore David Frank of Front Royal, Va., said. Frank was also glad to see the Arlington Diocese’s Director of Vocations, Fr. Brian Bashista, there. “His presence provides a great opportunity for local students in the Arlington Diocese who are discerning a religious or priestly vocation, like myself, to make first contact with the Vocations Director.”

Frank also enjoyed spending time with so many priests, seminarians, and religious. “I had excellent conversations with them,” he said.

Freshman Emi Funai of Seattle, Wash. agreed. “I loved seeing the different religious orders on campus and especially seeing students talking to the priests, monks, and nuns excitedly about their vocations,” she said. “It’s awesome to see so many young people who are open to whatever God has planned for their futures.”

One of those young people is Senior Jozef Schutzman of Van Buren, N.Y. “Discernment Weekend really made me realize the importance of deciding whether or not I had a vocation,” he said.

Senior Jozef Schutzman makes plans to spend his summer in discernment with the Transalpine Redemptorists.

Schutzman plans on discerning a vocation this summer with the Transalpine Redemptorists, an order of monks located on the island of Papa Stronsay, Scotland. “I am really looking forward to it,” he said.

An Open Panel Discussion with priests and religious was held on Saturday night. Sophomore Ted Cantu of Clearwater, Fla., was particularly amazed by it.

“There were over 20 religious answering questions, offering advice, and sharing some of their experiences,” he said. “It’s tremendous that we are able to get so many religious to come here and help us discern our vocations. It was a really edifying weekend.”

The weekend concluded with Sunday Mass and brunch where the priest and religious were once again able to spend time with students.

“I think it is great that Christendom College has a weekend like this,” Sophomore Tim Ginski of Collierville, Tenn., said. “It provides the students with a great opportunity to see the many charisms existing in the Church and the beauty residing within each one.”

A collection of the talks given during the weekend can be downloaded at Christendom on iTunes U.