Conservative Leaders, Obenshain and Marshall, Encourage Students to Get Involved in Political Sphere

On March 1, FOX News Commentator Kate Obenshain and Virginia State Delegate Bob Marshall addressed students at Christendom College. The event, hosted by the College Republicans, is the first in a series of Coffee Socials that provide students with an informal setting to meet great conservative leaders and exchange ideas. 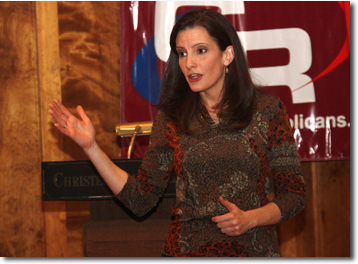 Obenshain, the Vice President of Young America’s Foundation, encouraged students to be active in the political sphere.

“Get internships with conservative organizations,” she said. “Come to conferences. It is so important to learn about the ideas that are out there—to equip yourself and educate yourself.”

She asked students to get particularly involved with what she called “a big fight” against the current healthcare bill being lead by President Obama. Obenshain said that the bill is a threat to our freedom.

“Anytime the government encroaches on our liberties, we have to stand firmly,” she told students. “We cannot compromise. Do not fall for that compromise language when it comes to your values and what you believe in.”

Obenshain remarked that truly conservative colleges like Christendom were a rarity and was enthused by what she experienced on campus. She encouraged students to run for office, citing a need for good conservative men and women, now more than ever.

“You all are not going to give up on what you believe just because you’re challenged or you’re tempted. You have to understand your principles and you have to be ready to stand for them and fight for them,” she said.

Delegate Bob Marshall (R), representing Virginia’s 13th District since 1991, then addressed students and reinforced Obenshain’s charge to be active in politics while sharing a number of personal experiences in politics.

“You have more power and influence than you think,” Marshall said. “You need to participate in this [political] process.”

He too warned students of President Barack Obama’s threat to the nation. “It’s no wonder Obama has so many czars running around DC—he wants a dictatorship. He really does. He does not want you to be a citizen where you have a mutual agreement with the leaders based on a constitution that everyone understands. He wants to break your conscience—and the only people who want to break your conscience are tyrants,” he said.

Marshall also clarified the recent controversy over remarks he made about the relation between abortion and handicapped children. He explained that his words had been twisted while speaking during a press conference about a recent medical study which links babies with low birth weight and cerebral palsy with women who have had an abortion.

The controversy started two days after the conference with a press release from a college student at Virginia Commonwealth University, which read “Legislator says disabled kids may be God’s punishment.”

He explained how the ABC, NBC, CBS, and AP news services were at the press conference and they had made no such report.

Senior Chris Dayton, who helped organize the event, said that he and his peers found the talks to be inspiring. “People came up to me and were saying that the talks had really got them thinking and made them see that they really could make a difference,” he said.

Dayton hopes to attract similar conservative leaders whom he describes as “doing good things for the country and staying true to their principles” for future College Republican Coffee Socials.

Students at Christendom are active in the College Republicans as well as other conservative and pro-life organizations throughout the year. The Young America’s Foundation has just announced that it will once again be ranking Christendom as one of the Top Ten Conservative Colleges in the nation.

Both Obenshain’s and Marshall’s addresses can be heard at Christendom on iTunes U.