Author and Economist Dr. Andrew M. Yuengert delivered a lecture entitled Prudence and Economic Models of Choice at Christendom College on November 30. Yuengert explained that there are things in the Aristotelian account of human behavior that cannot be captured in the formulaic approach of economists.

Yuengert, a Professor of Economics at Pepperdine University, holds a B.A. in Economics from the University of Virginia and a Ph.D. in economics from Yale University. Before coming to Pepperdine, he was a research economist at the Federal Reserve Bank of New York. He is the author of The Boundaries of Technique: Ordering Positive and Normative Concerns in Economic Research, and Inhabiting the Land: the Case for the Right to Migrate. His lecture was based on a book he is currently working on. 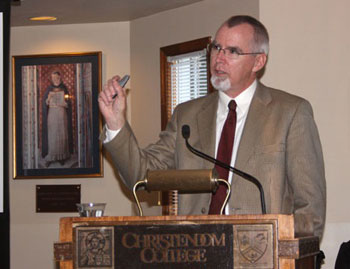 “[For economists], the assumption is that the more complex the model, the closer to reality I will get,” Yuengert said.

Yuengert noted that Aristotle’s account of human behavior implies that human behavior cannot be predicted in the comprehensive way that economists say it can. Quoting Aristotle, Yuengert said, “It is the mark of an educated man to look for precision in each class of things just so far as the nature of the subject admits.” 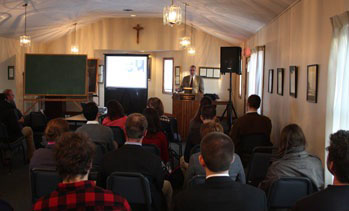 Human behavior and decisions cannot be fully measured by mathematical formulas. Human choice is too complex to be modeled qualitatively, he said.

“It may be that complexity is converging to something, but it doesn’t have to be reality. This may be obvious to anyone who is not an economist, but it is not to economists,” he said. “If this is true then, economics cannot even hope to be comprehensive.”

The lecture, funded by the Koch Foundation, was hosted by Christendom College’s Cincinnatus League, an organization that seeks to foster discussion of conservative political philosophy on Christendom’s campus.

This fascinating lecture can be downloaded at Christendom on iTunes U.