Christendom College celebrated its commencement weekend on May 11-13 by awarding degrees to the 100 graduates of its largest class in history, as well as honoring Rev. Kenneth Baker, S.J., editor emeritus of Homiletic & Pastoral Review, and Mother Agnes Mary Donovan, S.V., Founder of the Sisters of Life. Rev. Baker celebrated the Baccalaureate Mass on Friday, May 11, and was awarded an honorary doctorate during the commencement exercises on Saturday, May 12. Mother Agnes Mary was awarded the college’s Pro Deo et Patria Medal for Distinguished Service to God and Country and delivered the commencement address. 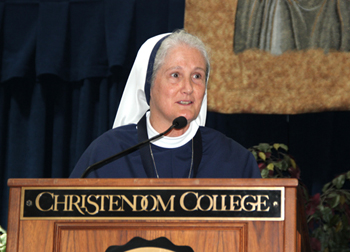 “Young graduates, dare to dream dreams full of Truth and beauty and goodness. For the world needs your dreams,” Mother Agnes Mary said during her address on Saturday. “To you has been given the vision of the dignity of the human person, ratified in the Incarnation… to you has been given the true perception of human love as gift and a privileged participation in the life-giving love of the Trinity, whose sublime beauty is manifested in self-sacrifice.”

Mother Agnes Mary, who responded to the late Cardinal John O’Connor’s call for an order dedicated to the protection of the sacredness of human life, implored graduates to fight for the culture of life.

“As graduates of this Catholic institution, you embrace the truth that every human person is a masterpiece of the Creator, made in God’s Image to grow by grace in God’s Likeness,” she said. “The ways in which you steward the gift of your life is the most fundamental contribution you can make to the building of culture of life and a civilization of love.”

Rev. Baker, who edited Homiletic & Pastoral Review for 40 years, warned graduates of the current hostility towards religion and particularly Catholicism during his homily on Friday, but told them that their education has prepared them to engage the culture.

“Your education here at Christendom College has prepared you to live in the world—to survive in it—but not really be a part of it, in the sense of making your temporal life the ‘be all and end all’ of your existence, as it is with so many of our fellow Americans,” he said.

Rev. Baker remarked that the graduates were taking with them “a Catholic view of the world and human life” that finds its expression in the tradition of the Church, Holy Scripture, the official teaching of the Church, and the liturgy.

“For Christendom College stands for the reign of Christ the King in the heart of the individual person, and as a way of life that should be present in life and in civil society,” he said.

Following Rev. Baker’s reception of the Honorary Doctorate, he encouraged the graduates to become writers.

“Those of you who are inclined to write, I urge you to write and to start now,” he said. “We must not let the atheists and the secularists dominate the works of print and images as they seem to do at the present time.”

Saturday’s ceremonies began with a bagpipe-led procession from Christ the King Chapel to St. Louis the Crusader Gymnasium. Salutatorian Frances Allington of Hemel Hampstead, England, welcomed all the attendees and began her address by recalling the memory of College Founder Dr. Warren Carroll, who was not at the ceremonies for the first time in the college’s history.

“This is the man without whom, none of us would be here today,” Allington said of Dr. Carroll, who died in July, 2011. “‘Christendom.’ [Carroll] wrote: ‘The very word, once commonly used to designate our Western civilization, is going out of style and even out of knowledge. Many have never heard it, cannot pronounce it, much less explain and serve what it stands for.’ In many ways, the modern western world is a civilization that is suffering from amnesia, a civilization that has forgotten its history, its faith, even its identity.”

Allington said that in founding Christendom College, Dr. Carroll worked to remedy a “cultural amnesia,” by educating students in their identity as Christians of the western world.

“Over the past four years, we have not gained merely practical wisdom, applicable only to a certain profession, nor have we sought to create something new… we have studied the eternal truths that never grow old, those truths which once shaped our civilization and which can do so again,” she said. “Knowing these truths, and bringing them, once again, to be defining of our culture, we go out from this place not to create all things in Christ, not to change all things in Christ, but to restore all things in Christ.”

Director of Admissions & Alumni Relations Tom McFadden presented the Student Achievement Award to Chris Foeckler of Manassas, Va., for his dedication to the community. Foeckler made great contributions to the academic life of the college and was active in varsity sports, school plays, clubs, and many other facets of student life. In all that he did, he remained “a shining example of Christian values to underclassmen and peers alike,” McFadden said.

Following the presentation of awards to Rev. Baker and Mother Agnes Mary, Valedictorian Michael Strickland of Front Royal, Va., suggested to his classmates that what they do after graduation not be “fundamentally different” from what they did before graduation.

“We ought to spend each day of our lives continuing to pursue wisdom and to live what we have learned,” Strickland said. “For us, college has not been merely a means to getting a job, but training in virtue and an initiation into the most important truths. Graduation should mark not so much the end of our learning, then, but the beginning.”

Closing the ceremony, College President Dr. Timothy O’Donnell delivered his charge to the graduates. He told them that the sanctity of marriage and the family is under attack and that they will have a role to play in this “great battle.”

“Through your education here, dear graduates, you are uniquely prepared for this great battle and you will all be involved in the battle to defend the true nature of marriage and the family,” O’Donnell said.

He noted how he has seen great strength and goodness in each of the graduates.

“With God’s help, you can win this battle in defense of the fundamental good, the very ground of society, the sanctity of marriage and the family,” he said. “We have to have confidence in God’s word and courageously—even if it means martyrdom and ridicule—proclaim the fullness of the Church’s teaching on marriage and the family.”

One associate of arts was conferred on Jessica Inzeo.

All addresses and remarks from Commencement Weekend can be downloaded for free at Christendom on iTunes U.