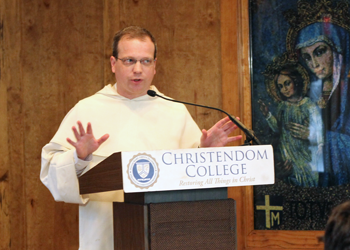 Thomistic scholar and author, Rev. Thomas Joseph White, O.P., delivered the annual St. Thomas Aquinas Lecture on January 28 at Christendom College. The talk, entitled “How Does the Resurrection of Christ Illumine Human Reason? From Benedict XVI to St. Thomas Aquinas,” explored the doctrine of the resurrection of the body and its influence of philosophical thought.

Delving into the thought of modern philosophers on the relation of the body to the soul and Pope Benedict XVI’s response to them, Fr. White demonstrated that it was philosophically natural to hope in the resurrection from the dead.

Fr. White explained further that the resurrection of Christ answers a very basic human desire and need to understand our final destiny as spiritual persons.

“For we aspire to immortality and knowledge of God and yet we are simultaneously mortal and bound to the labors of illness and death,” he said. “Hope in this situation is paradox. We must turn to the source of all that is—the Creator of the world…Who can create from nothing. And we must hope that He can raise the dead. Christ alive in the resurrection is the response of God to a deep innate longing in the heart of man.”

Concluding, Fr. White told the audience that if they wished to be ahead of the curve in human history, that they should be a Thomist, or follower of the thought of St. Thomas Aquinas.

“His vision of the human person is uniquely compatible with a realistic belief in the resurrection of the dead,” he said, “and helps us to see—even in our own age—how faith in the Word made Flesh provides a vivid, rich illumination to our human reason.”

Fr. White is a native of southeastern Georgia. He converted to Catholicism in college, in part from the influence of reading the letters of Flannery O’Connor. Educated at Brown University (B.A.) and the University of Oxford (Ph.D.), he entered the Dominicans in 2003 and was ordained a priest in 2008. He teaches theology at the Dominican House of Studies in Washington, D.C., and is the director of its Thomistic Institute. He is the author of Wisdom in the Face of Modernity: A Study in Thomistic Natural Theology (Sapientia Press, 2009), and is an Ordinary Member of the Pontifical Academy of St. Thomas Aquinas.

The College hosts a distinguished speaker each year on or around the feast of St. Thomas Aquinas (January 28) to speak on a philosophical or theological topic. To listen to this lecture and the previous lectures in this series visit us at Christendom on iTunes U, christendom.edu/itunesu.