Top Scholars Reveal a Catholic Vision of History at Conference 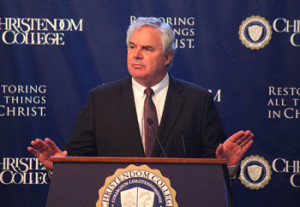 On July 13, Christendom College hosted a one-day conference on Catholic history, featuring prominent historians from across the country. Over 230 attendees were given a Catholic perspective on topics that ranged from the Crusades to ecumenism with the Eastern churches. Held in the memory of the college’s founder, Dr. Warren Carroll, the conference was emceed by EWTN’s Marcus Grodi. 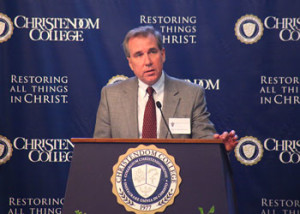 Dr. Thomas Madden, whose expertise has been sought by The New York Times, Washington Post, Wall Street Journal, USA Today, NPR, and The History Channel, deliver a talk entitled “Rethinking Holy War: The Crusades and Catholic Devotion in the Middle Ages.” Madden exposed many contemporary misunderstandings of the Crusades as uneducated and lacking in any real evidence. Madden posited that in order to understand the Crusades, one had to have an understanding of “Medieval piety.”

“In the case of the Crusades, a Catholic vision of history has allowed historians of all faiths to better understand this important topic,” he said. “It is up to us to advance that clearer view of that people in our distant past, despite the reluctance of many to accept it.” 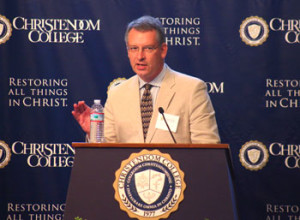 Author and historian Dr. Brad S. Gregory discussed history as the “handmaiden of theology.” Gregory argued that while avoiding a Catholic confessional history, one might still serve a Catholic vision of history and reach those in academia who may be antagonistic toward Catholicism.

“Because people are not likely to change their basic commitments unless there is something the matter with their own, we have to trouble the waters,” he said. “We have to argue on the basis of evidence, to use reason in service to the Faith, without—if we want to have chance of reaching those who do not share our views—presupposing anything that is substantively part of the Faith.” 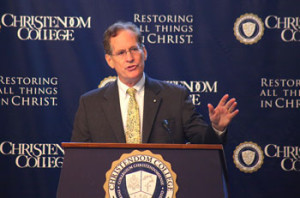 Dr. Timothy O’Donnell, the author of Heart of the Redeemer and Swords Around the Cross: The Nine Years War, presented a talk entitled “Why History? The Church’s View.” O’Donnell explained the importance that the Church has placed on the study of history and how in recent years the field has suffered from “a crisis of faith.” In the second part of his talk, O’Donnell described the thought of Dr. Warren Carroll and how his historical works responded to this “crisis.”

“It was his goal in his work to tell the full historical story of Christian civilization,” O’Donnell said of Carroll. “From its preparation, birth, growth, climax, division, and its retreat, but always as Carroll said, ‘ready for its coming resurrection.’ Talk about a man of hope.” 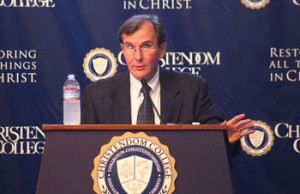 Dr. Christopher Shannon, author of the highly acclaimed Bowery to Broadway, examined the historical approach of Jean Daniélou and Henri de Lubac. Shannon said that by placing the saints along side the great political leaders of history, the saints, as types of Christ, would bring an organizing structure.

“[According to Daniélou and de Lubac,] what we should be looking for in history is Jesus Christ, particularly as we see Him in the saints,” Shannon said. “The saints are our guides to history.” 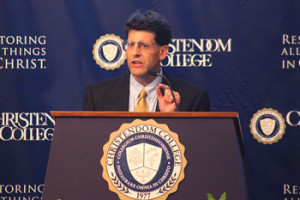 “They believed that Christianity united philosophy and mythology for the first time,” Schwartz said. “Whereas in the ancient world, myth and religion were considered one thing and philosophy quite another…Christianity rhymed these two roads to the truth due to its historicity.” 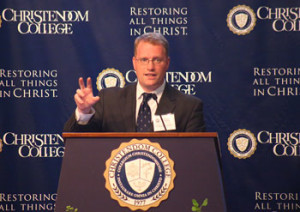 Popular lecturer Dr. Brendan McGuire debunked modern misconceptions about what ecumenism really is and common misunderstandings in the history of the Byzantine churches.

Audio and video of these lectures, as well as a “Q & A” session held at the close of the conference, are available for download at Christendom on iTunes U, christendom.edu/itunesu.