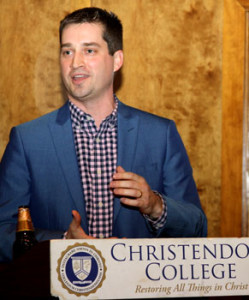 Christendom’s “Life on Tap” networking series returned to campus this past Tuesday night, featuring notable Christendom alumni and leaders in business management Tim Halisky (’01) and Jake Meza (’05). More than fifty students, in addition to various members of the faculty and staff, were present to learn how a liberal arts education aided these two men in achieving their great level of success as managers in the business world.

Halisky is currently the president of RLA Mid-Atlantic. He has been involved in the start-up of three multi-million companies, using his Christendom degree alone. He began his talk recalling his time at Christendom, calling it “the best four years of [his] life,” due in large part to the tight-knit and supportive community. The talk focused mainly on how this community allowed him to make favorable impressions on his interviewers and peers.

He discounted the idea that the resume is the primary way to get a job. Instead, it is more important to make a good first impression and make the interviewer like the interviewee as a person, he advised. The community at Christendom gave him the opportunity to make strong, genuine relationships that helped him grow as a person, and consequently to make a favorable impression on his interviewer. It also gave him the skills necessary to create his own network, an essential tool since most businesses will hire people they know. He stressed the importance of attitude as well: interviewers are looking for self-motivated, cheerful, and energetic people in order to create a workspace that can thrive, reminiscent of the Christendom community.

“Christendom students are able to distinguish themselves in the job market because they have a ‘special skill’: the ability to think,” said Halisky. “Because Christendom students are taught to think and to question, rather than just to specialize in a certain field, they have the invaluable ability to adapt to circumstances with which they are unfamiliar. Christendom has given you a special value that will allow you to excel. I urge you—become leaders when given the opportunity.” 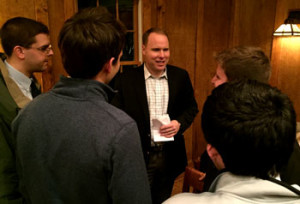 Jake Meza, the director of Urgent Care & Occupational Health at Valley Health Hospital System, took the stage next, where he reiterated many of Halisky’s points. Meza was a political science and economics major at Christendom, which he believed would give him an edge in the business world, and his experience has proven him correct. He stressed the importance of differentiating oneself from other job applicants, and strengthened his point with an example from his own experience.

In a job interview at Valley Health, he was compelled to be honest with the interviewer, and to make it clear to her that his first priority was to come home to his family every night. The interviewer was impressed by his honesty and conviction, a rarity in modern culture. He reiterated Halisky’s point about the unique foundation Christendom offers, which allows its students to reason better than their peers.

But he also cautioned his audience.

“That being said, don’t expect to have a high-paying job right away. You need to be patient, persevering, and open to learning—all things you learn while you’re here at Christendom,” Meza concluded. “Be principled, and trust that the rest will follow.”

The “Life on Tap” series is a bi-monthly event organized by the college’s career and leadership development office, featuring noted alumni speaking on topics such as journalism, web development, and non-profit business. To find out more, please visit here.