Alumni Thriving in Journalism to Report on Secrets of Success 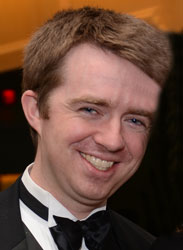 The career and leadership development office will host the second “Life on Tap” event of the semester on Tuesday, February 3, with talks from three Christendom College alumni who have found great success in the field of journalism – Peter Jesserer Smith, Charlie Spiering, and Matt Hadro. The event will be held in St. Kilian’s Café from 7:30-9:30 p.m., with snacks and beverages provided.

Alumnus Peter Jesserer Smith earned his B.A. in philosophy, and was co-founder and editor-in-chief of Christendom College’s student journal The Rambler, prior to graduating in 2009. While still a student at Christendom, Smith was a staff reporter for LifeSiteNews, where he worked until 2011. Following his five years with LifeSiteNews, Smith wrote for the National Journalism Center, Virginia Statehouse News, and worked as a freelance journalist before becoming a staff reporter for the National Catholic Register in 2013.

Charlie Spiering, a 2005 history major, is a White House reporter for Breitbart News, a popular news and opinion website. Prior to working for Breitbart, Spiering reported for Rappahannock News, was the U.S. editor of PoliticsHome.com, and wrote for The Washington Examiner. After five years with the Examiner, Breitbart hired Spiering in the spring of 2014.

Questions concerning this event may be directed to Greg Monroe, director of career and leadership development, at greg.monroe@christendom.edu, or go to the Life on Tap page.