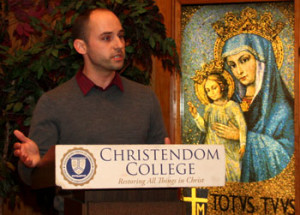 Alumni Bryan Hadro (‘04) and Brandon Vaughan (’05), experts in Web Development and IT, were the featured speakers at this week’s “Life on Tap” networking event, held in St. Kilian’s Café on February 10.  Nearly forty students, faculty, and staff were present to learn the ins and outs of their industry, and how a liberal arts education helped these two alumni find success.

Hadro, a senior web developer at US News & Report, was the first to speak. As a way of introduction, Hadro related how he began his career as a software developer working with ESPN, even without a specialized degree in programming or web design.

“When I finally became a senior, I had no idea what I wanted to do after college.  If you feel the same way, don’t worry, it’s completely normal,” he said.

Though he had experience with coding, he felt discouraged because there were many other students in the field who had spent time in school learning about it.  But after discussing print design with his boss, he realized web design was a more compelling option.

Hadro encouraged all of the students to give web design or programming a shot, just to see if they liked it.

“Web design is unique, because you can become successful without tech training. When people interviewed me, they never paid attention to what my degree was.  They didn’t care that I was a philosophy major,” Hadro said. “What they are looking for is knowledge: if you can demonstrate your work and your knowledge of the field, you will be able to get the job; but if you are rusty or ignorant in certain areas, they will able to tell right away.”

Hadro found that Christendom’s education helped him in numerous ways well after his graduation, and looks back fondly on his time there.

“When I first came to Christendom, I didn’t care much about my education or my faith.  But as time went on, I began to appreciate the courses, the professors, and my faith,” he said.  “I was so glad to have the opportunity to talk with the professors about anything – not just the course material, and to really have them as mentors.” 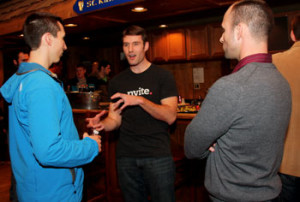 Vaughan, who, like Hadro, does not have a specialized degree in programming or design, was able to  to find jobs with Nclude and Trinity Consulting, and most recently became the co-founder of Nvite, the world’s first attendee-focused event registration and ticketing platform.

When he first started out, Vaughan was called on to do a web design project for his company, and actually did a better job than their current web designer.  The company recognized his talent and gave him the tools and the time he needed to learn web design. After some time, he decided that he needed to move on and start his own company.

He cited Christendom’s tight-knit community as a helpful factor at this time in his life.  “Christendom is a beautiful and wonderful place to meet people, where you can make real, human connections – leverage this ability,” Vaughan said to the students.

Because Vaughan learned this skill at Christendom, he was able to reach out to a successful businessman on one occasion.  After some time, the man recalled his meeting with Brandon, looked into his work, and offered him a job.

Vaughan encouraged the students to give his field a try.

“Web development is great as a supplemental income, or you can deep-dive into it as a career.  It’s a very flexible field, whether you are single or married.  The environment has very few boundaries, and the web development community is very supportive of each other,” he said.

Vaughan concluded his speech with the special value of a Christendom education.

“A liberal arts degree is helpful because it allows you to become a learner. This is an essential skill in web development, where the industry changes on a weekly basis; you’re always learning in my field. Be excited about your future, and jump right into something you’re interested in. And don’t be afraid.  Take leaps of faith, and trust that things will work because God likes that sort of thing.”

The next “Life on Tap” will feature alumni Sean Kay, partner at Pricewaterhousecoopers, and Michele Velasco, VP for finance at Sirius XM Radio, who will speak about working in their field of finance on Tuesday, March 3, at 7:30 p.m.