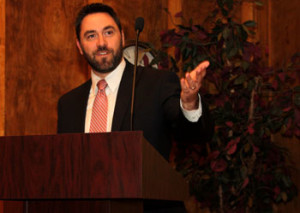 Mark Rohlena (’00) and Christendom College’s Chief Financial Officer (CFO) Ken Ferguson were the featured speakers at the career and leadership development’s popular networking series, “Life on Tap,” held in St. Kilian’s Café on April 14. Over fifty students, faculty, staff, and alumni listened to these two very distinguished and accomplished men discuss how invaluable a Christendom, liberal arts education can be in aiding them to achieve success in their lives and careers.

Rohlena graduated from Christendom in 2000 with a double major in history and political science and economics, and is now the director of domestic social development at the USCCB. He began the evening extolling the “solid foundation” which Christendom provides.

“Once I entered adult life, I realized that Christendom provides a treasury of truth which guides you for a lifetime,” said Rohlena.

Following graduation from Christendom, Rohlena earned his J.D. from Ave Maria School of Law, where he found that his Christendom education facilitated his ability to de-construct arguments and understand dense material.  After receiving his degree, he began working at Holland and Hart, LLP law firm in Denver, CO.  Rohlena seemed to be set for a long time, having both job security and a city in which he was comfortable to live.

Eventually, however, volunteer work became a regular part of Rohlena’s life.  These experiences led him to a period of discernment about entering the non-profit world, for which he would soon after apply — becoming the CEO of Catholic Charities of Colorado Springs.  Rohlena took a moment to encourage the students to join a non-profit organization.

“There is great need for people with your kind of formation in this field, so if you are open to it, I encourage you to explore the call,” he said.

Though his experience at Catholic Charities in Colorado “lifted up his faith,” Rohlena still felt drawn to politics as a political science major.  He entered into a second period of discernment, and now works as director of domestic social development at USCCB.

Rohlena then spoke to the students directly about life after graduation.

“You should be open to opportunities that will be valuable, even if it isn’t related to the career you’re looking for,” Rohlena advised. “Don’t be afraid to put off monetary considerations for other things; the Lord provides.  And don’t lose the joy you experience at Christendom: it gives a witness to Christ which people will be attracted to.”

Current Christendom College Chief Operating Officer and Chief Financial Officer Ken Ferguson exhorted his audience to get credentialed and gain the proper experience prior to working at a non-profit organization. 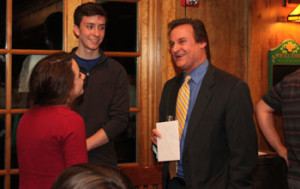 “You should understand that people working for non-profit organizations are paid professionals.  Take Mark [Rohlena] for example.  He was hired because he had the vocation to go to law school.  People will hire you because they believe you will add more value to their organization than they can possibly pay for.”

Having set this disclaimer, Ferguson discussed his own circuitous route to the non-profit field.  Ferguson grew up and eventually worked in Hollywood as a consultant for “some very famous people.”  Ferguson, however, experienced a conversion, which led him to make a commitment to do whatever Christ wanted him to do.  This led him to take a leap of faith as CEO of a dying film company, which eventually led him to become CFO of a public company, and eventually to move to Washington, D.C., as CFO of National Geographic.

Ferguson again tried to clear up misconceptions about non-profit and for-profit businesses.

“There really is no difference between the two except for the fact that a non-profit business puts any money it makes back into its mission.  Don’t necessarily plan on entering a non-profit organization, but instead figure out your own vocation, what you like to do, and have faith that God will open the doors that should open.”

The “Life on Tap” series is a bi-monthly event organized by the college’s career and leadership development office, featuring noted alumni and friends speaking on topics such as journalism, web development, and non-profit business. To find out more, or see videos from past “Life on Tap” events, please visit here.