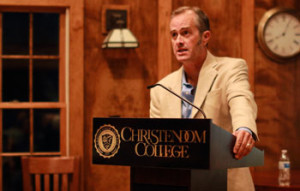 Frank O’Reilly (’83), the founder and CEO of Petrine Construction, and Dean Reineking (’09), an architect for David M. Schwarz Architects, Inc., were the featured speakers for the first “Life on Tap” event of the fall semester, held in St. Kilian’s Café on September 1. Over forty students, staff and faculty members listened and networked with the successful alumni as they spoke about their careers in the fields of architecture and construction, emphasizing the importance for Christendom students to discern their future careers and pursue them proactively during their years at college.

O’Reilly was one of the first graduates of Christendom in 1983, earning his B.A. in history. He then went on to become the founder and CEO of Petrine Construction, responsible for designing and constructing many of the buildings that adorn Christendom’s Front Royal, Va. campus.

In his talk to Christendom students, he began by focusing on the discernment process of a major and how it plays into a future career, stressing the value of a Christendom education in a world that lacks an understanding of philosophical and theological concepts and their importance.

After graduation, O’Reilly’s future father-in-law encouraged him to pursue a practical career in order to support a family. For O’Reilly, this discernment of his vocation was the most important turning point of his life. He had experience in construction, and through a process of trial and error discovered that he was an “idea man,” and used this self-knowledge to further his career.

“The skills of learning to think and communicate well that I gained at Christendom became invaluable in my pursuit of a career that supported my vocation as a husband and father,” said O’Reilly.

O’Reilly advised prayerful discernment of one’s vocation and the choice of a career that would support that vocation.

“Pursue what you have a passion for. It’s better to commit to something and stick with it rather than chase after passing interests. This requires a self-knowledge and understanding of personal priorities,” O’Reilly concluded. 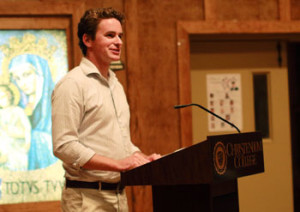 Dean Reineking, a 2009 philosophy major, earned a position with David M. Schwarz Architects, Inc., last year, one of the largest and most-recognized architecture companies in the United States. He supported the points made by O’Reilly, further emphasizing the importance of Christendom students being proactive during their college years in their career pursuits.

Reineking began by focusing on his two years working with campus evangelizing at FOCUS right after graduation — a career move that was pivotal in his later pursuit of architecture.

“These years reinforced the skills that I learned at Christendom of critical thinking and oral presentation, along with teaching me skills in fundraising, time management, and building personal and business relationships,” said Reineking, who believes in the value of such work experiences and other internships in forwarding one’s career path.

Like O’Reilly, Reineking emphasized the importance of taking the time to discern one’s vocation seriously, saying: “You do have a very real vocation, but need to take in practical considerations, so that you can fulfill that vocation.”

He then went on to say that the discovery of this vocation and one’s future career is not made by “sitting around with a piece of paper and pencil,” waiting for it to come to you. Reineking strongly encouraged students to network and make connections now, while they are at school.

Reineking further stressed this point, saying that one of the most important pieces of advice he received during his years as an undergraduate was to get his face out there and connect with potential future employers. By doing this, he was able to have several job offers almost immediately upon graduating with his Master’s degree, whereas many of his fellow graduates were left jobless during the large economic recession.

“Christendom supplies students with skills that future employers are searching for: oral and written communication and a literate cultured background. An interviewee who is able to make easy conversation is someone who sticks out and is memorable to the interviewers,” Reineking advised.

Reineking told students to “go and visit people in their offices before you approach them for a job,” suggesting that not only will this make students memorable to future employers, but it will help with the discernment process as well. Students who have talked to individuals working in the field they are interested in will have a better understanding of the school requirements, job environment, and social atmosphere.

Reineking finished by reemphasizing that in any field, but particularly that of architecture and construction, making connections early with future employers and networking matters.

The “Life on Tap” series is a bi-monthly event organized by the college’s career and leadership development office, featuring noted alumni speaking on topics such as architecture, law, and business development. To find out more, or see videos from past “Life on Tap” events, please visit here.