Alumni Business Leaders to Mentor Students at Life on Tap 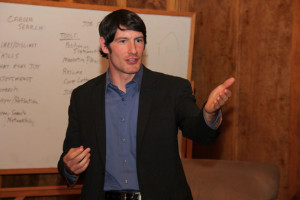 Greg Monroe, director of the career and leadership development office, hosts all the Life on Tap events.

The career and leadership development office will host “Life on Tap” on Tuesday, October 13, with talks from three Christendom alumni who have successfully established themselves in the world of business —Ryan Doughty (’10), Ben McMahon (’04), and Steven Storey (’00). The event will be held in St. Kilian’s Café from 7:30-9:30 p.m., with refreshments provided.

“Life on Tap” gives students the unique opportunity to ask questions and seek advice from these alumni mentors, especially on topics pertaining to prospective careers in the fields of business, sales, and entrepreneurship.

Ryan Doughty earned his B.A. in history while at Christendom College, leading the varsity soccer and basketball teams during his time at the college. Doughty took his leadership skills into the workforce soon after, joining immixGroup as an account manager, where he worked with 350 partners and fifty vendors to assist in their go-to market strategy for the federal market place. In 2014, Doughty joined Cisco Computer Networking, one of the world’s foremost networking equipment design companies, as a business development manager.

Ben McMahon graduated from Christendom with a bachelor’s degree in philosophy in 2004. Following graduation, McMahon became the co-owner of Cornerstone Construction, where he supervised construction sites, worked as a lead carpenter and foreman, and helped build the business from the ground up. With his skills in business management and leadership, McMahon became the superintendent and project manager for the Schaper Company, where he oversaw all Mid-Atlantic projects for the company. After six years at Schaper, McMahon became the CEO of BSM Properties, an advanced property management and investment group.

Customer success manager Steven Storey graduated from Christendom in 2000 with a degree in philosophy, and has a fourteen-year history of successfully effecting business growth. After graduating from Christendom, Storey worked as an account executive with Tallan, before joining Northwestern Mutual as a financial representative. Storey took his skills in consulting and finances to Paladin Financial Group, where he served as a financial consultant for three years. In 2010, Storey joined immixGroup as a senior account manager in their Government Channels Division, before becoming a customer success manager in 2014.

All students and alumni are encouraged to attend.  For a full schedule of this fall’s Life on Tap events, please visit www.christendom.edu/career/life-on-tap/