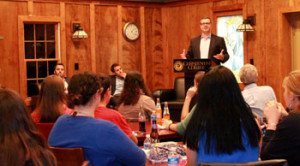 At the “Life on Tap” alumni networking event held in St. Kilian’s Café this past Tuesday evening, Christendom alumni Steven Storey (’00), Ben McMahon (’04) and Ryan Doughty (’10) spoke to students about the value of a liberal arts degree and how it is the best preparation for the world of sales, business, and entrepreneurship.

Organized by Greg Monroe in the career and leadership development office, the Life on Tap events bring successful alumni to campus a number of times a semester to give current students an insight into the many varied opportunities that await them following graduation.

Storey graduated from with a degree in philosophy in 2000, and has spent the past fourteen years applying himself to the sales and consulting industries.  After establishing himself in the workplace as a technology salesman for Tallan, he went on to conduct inside sales with Northwest Mutual and then investment and insurance consulting at Paladin Financial Group.  In 2010, he joined immixGroup as a senior account manager before attaining his current position as a customer success manager in 2014.

“Christendom distinguishes you from your peers,” he said, “for three main reasons: you are all happy, likable people who you can respect.”

He explained that the reason they were happy was because they were all seeking to live lives of virtue, and an ordered spiritual life was essential and employers are consistently drawn to this.
He emphasized the importance of respect and ethics in the workplace, and how Christendom serves as a training ground for developing character.  Additionally, Christendom students have the advantage of critical analysis and logical presentation.  “We learn why things are the way they are,” he said, and graduates also “stand out in terms of communication, whether it be verbally or written.”  These three characteristics – a wholesome, well-tempered personality, the ability to look a level deeper and ask ‘why,’ and the habit of logical argument are always desirable, but especially good for sales.

Ben McMahon, a 2004 philosophy major and the CEO of BSM Properties, began his career in real estate as co-owner, lead carpenter, and foreman in Cornerstone Construction.  After six years as Schaper Company’s superintendent and project manager, McMahon took his current position in property management and investing at BSM.

McMahon also gave reflections on the importance of character in the workplace, and praised the college’s atmosphere of integrity.  After ten years of working in construction, he found that lies were among the most disheartening but frequent things to hear as a boss.  “Honesty is always an advantage,” he said. “Never lose this, and don’t put on airs.  People prefer honesty, especially within the workplace.”

Ryan Doughty completed his history degree in 2010, after distinguishing himself in varsity soccer and basketball with his dedication and leadership.  By tapping into Christendom’s alumni network, he was able to contact Storey and join immixGroup after graduation, and from there he advanced to his current position as a business development manager for Cisco Computer Networking.
Doughty related his sports career to his professional life, overcoming challenges with the aggressive goal-setting attitude developed in Christendom’s athletics.  “We want goals to move up, we love to have goals and love to achieve them.”

However, he also noticed the attractive social aura to Christendom grads, and remembers being constantly called out by his coworkers at immixGroup as someone pleasant to work with, a trait which he attributes to finding Christ in the Eucharist.

The relationships he developed enabled him to apply to and be accepted to his current position at Cisco, a process where interview skills proved essential.  According to Doughty, the key to a successful interview is to learn how to sell the liberal arts degree and he credits his education with helping him be more easily trained, hardworking, and well-rounded.  “If you can sell that,” he said, “you have what it takes for sales.”

After emphasizing the importance of hard work and trustworthiness, he reminded students that life in the workplace is directly impacted by what they take from the college years.
“The things you take from here will transfer to the work where you’re going to go,” he said. “What you do right now will help you later on, in whatever career you have.”

The “Life on Tap” series is a bi-monthly event organized by the college’s career and leadership development office, featuring noted alumni speaking on topics such as journalism, web development, and non-profit business.  To find out more, or see videos from past “Life on Tap” events, please visit here.