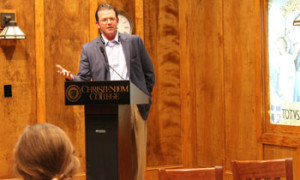 Alex Scrivener (’05) and Sean Garvey (’93) were welcomed back to campus for the popular “Life on Tap” speaker series, organized by the career and leadership development office, to speak about the value of the liberal arts as applied to the technology field.

Garvey graduated in 1993 with his bachelor’s in political science.  Like many job-seekers at the time, a booming digital workplace proved attractive to him, and his career began with a simple job making ten dollars an hour for Evergreen in Northern Virginia.  However, for the next four years he was rapidly promoted and gained experience with systems for Boeing and consulting firms in New York City, and eventually became a Systems Administrator.  In 1997, he started his first business, Phaedo Consulting, and after selling this company to Ebay he formed his second company, Novus Consulting Group.  After sufficiently developing this enterprise, he sold Novus in 2007 to IBM, and he currently performs private equity consulting.

“I am involved with the technology field,” Garvey said, “and it’s quite by accident.”  From the liberal arts to the computer sciences, the speaker traced his journey with humility. “I would say I have a very blessed career in a lot of ways.”

But besides attributing his successes to Divine Providence, he also recognized that his education played a key role in his technical career.

“I am very passionate about this insight,” he said.  “It comes through building my own company.  It’s no longer appropriate for someone to look at you and give you that smirk, ‘what are you going to do with a liberal arts degree?’  The evidence points to the fact that a liberal arts education is the most practical education you can get.” Garvey related that in developing Novus he sought hard working, intelligent employees who were willing to train on the technology – these, he claims, were the best, even without specialized IT training.  Creativity and problem solving skills put the life-long learner at a surprising advantage to the one with a technical degree.

“The world is completely different than what people used to tell you,” he said.  “We now live in an information or knowledge economy, and it moves at a lightning pace.”

Earning his political science degree in 2005, Scrivener has experienced similar successes in the technical world.  Prior to his current position as the Lead Cloud Services Engineer at LiteCloud, Scrivener worked in a variety of roles throughout the industry, including six years as the IT Manager for Telogical Systems.  Like Garvey, Scrivener focused on the value of a Christendom degree in an ever-changing industry.

“The Christendom degree which you get here is the ability to learn new things.  It 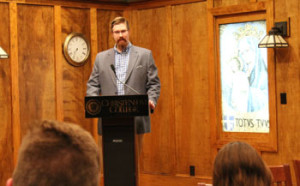 sounds trite, but it’s true,” he said.  “You have to be able to learn things on the fly.”

Scrivener identified problem-solving and resourcefulness as the most appealing traits in the IT world, rather than compartmentalized training.  That, he notes, comes with the job, not education.
“You have to be able to see a problem and want to solve it.  If you’re going to sit around and wait for other people to tell you what to do, you’re not going to succeed.”

By developing self-sufficiency, habits of study, and personal dedication in Christendom curriculum, Scrivener found himself prepared to apply himself to a variety of environments and acquire the skills he needed to succeed.

The “Life on Tap” series is a bi-monthly event organized by the college’s career and leadership development office, featuring noted alumni speaking on topics such as journalism, web development, and non-profit business.  To find out more, or see videos from past “Life on Tap” events, please visit here.