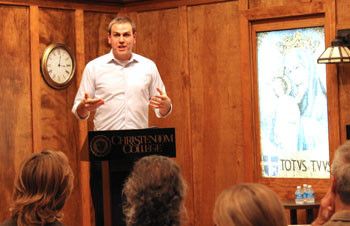 John Mavretich (’09), lawyer at Venabe LLP, Tyler Lowe (’11), director of online education at the Federalist Society for Law & Public Policy, and Lauren Merz (’10), director of strategic partnerships at Live Action, were the featured speakers for the last “Life on Tap” of the fall semester, organized by Christendom’s career and leadership development office. More than sixty students, faculty, and staff members attended to hear Mavretich, Lowe, and Merz, discuss their experiences working in Washington D.C. and learn how to achieve similar success.

Maveritch, who earned his B.A. in political science and economics from Christendom, started off the evening by pointing out that there are many opportunities in the D.C. area for alumni of the college.

“Rather than being a limitation, my liberal arts education has been an incredible asset in my career. There’s a real versatility to the education you receive at Christendom, and students need to understand and appreciate this while they’re here,” said Mavretich.

After graduating from Christendom, Maveritch gained experience in communications, public relations, radio, and TV. After a few years with Energy Research, Mavretich decided that he was interested in the business sector and went on to get a law degree at George Mason University.

His liberal arts background helped propel him through graduate school and into a successful law career in Washington, D.C., thanks to the “soft skills” Christendom gave him in the classroom and beyond.

“We’re living in an era where basic skills should be heavily emphasized, but they’re not. The first of these is reading comprehension. Being able to pull out the main ideas from dense texts is very beneficial. The writing you’re doing for exams, papers, and your senior theses here at Christendom are instilling in you a necessary skill set for later in life,” he said.

Maveritch emphasized further the value of interpersonal skills as well. 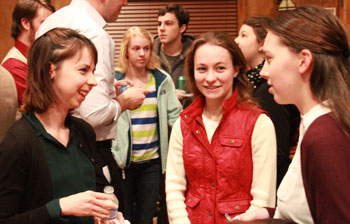 “When you’re applying to a law school or firm, at first you’re just a name on a piece of paper, but when you go in for an interview, employers are looking for someone who they’re going to want to work with day in and day out. Christendom gives you these skills, but you need to actually go out and work on your networking skills as well, while you can. These will take you far in impressing an employer or a committee at a law firm or elsewhere,” he concluded.

Tyler Lowe followed Mavretich, focusing her talk on the value of doing internships before graduating college. The summer after her freshman year, Lowe decided she never wanted to waitress again, a moment that helped her focus clearly on her career goals.

“I did internships between my sophomore and junior years at Christendom,” said Lowe, who majored in philosophy. “It wouldn’t have happened if I didn’t strive after my goals with determination and decided that waitressing wasn’t where I wanted to be.”

She said that she spends much of her time now at the Federalist Society interviewing students, speakers, and senators.

“It is a unique job that requires a unique skill set and background. I wouldn’t have arrived where I am today if I hadn’t set those goals for myself after my freshman year. Those goals, and the skills of clear thinking that I received at Christendom, helped me find my success,” she said.

Lauren Merz earned her B.A. in philosophy, and now works for the pro-life media group Live Action. She started her talk by relating her time both in Christendom’s student life office and as a member of the college’s student activities council, where she learned the administration skills she still uses today. 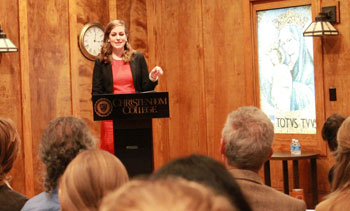 After graduating, Merz took her practical and intellectual skills out into the workforce, first at the Media Research Center and then with Live Action. As a member of the pro-life media group, she is on the front lines of the battle against groups such as Planned Parenthood. While it can be a daunting task, Merz believes Christendom’s education and culture helped prepare her for her current job.

“It’s a real spiritual battle out there, in the real world — you need the spiritual formation that you get at Christendom to help you thrive and succeed. Attend Mass and adoration to grow in your spiritual formation, but also take advantage of the work opportunities here, which will help you grow, she said.

“You need to be able to network. Start by focusing on the person you’re with and engage fully with them in your time together. Typically, I have thirty seconds to sell something to a donor. I have to exude my passion for the organization, and you must also if you’re going to find success. Furthermore, have a can-do attitude. Find a mission you’re passionate about. We’re in a really bad time right now, but you’re called to fight for life and to be a light in the world. My challenge to you is to allow God to use you in whatever you’re called to,” concluded Merz.

The “Life on Tap” series is a bi-monthly event organized by the college’s career and leadership development office, featuring noted alumni speaking on topics such as journalism, web development, and non-profit business.  To find out more, or to see videos from all of this fall’s “Life on Tap” events, please visit here.