Getting projects done on time and under budget is more important than ever in today’s economy. Finding project managers that work well with others and are strong communicators is the problem, however — but not for Christendom alumni, according to project managers Gerry Zapiain (’85) and Tom McGraw (’93). Both alums of the college, they spoke together at the latest Life on Tap alumni networking series event, explaining to students how their strong communication skills can help them find success and make a difference in any field.

Zapiain, who earned his B.A. in political science and economics from Christendom, went on to earn his Master’s in International Trade from Texas A&M University shortly after graduation before joining the Department of Commerce in 1992, where he has remained ever since. Since 1999, he has served as the Senior Medical Device International Trade Specialist for the Department of Commerce.

During his talk, Zapiain spoke in depth about project management to the students, explaining what it is and why Christendom alumni are uniquely prepared for success in the field.

“It’s extremely important for a project manager [to have strong communication skills], because you’re going to need to work with other people to advance, to get what you want, and to have a secure position,” said Zapiain. “I have found great success at my job because I’m able to get along with people well. Here at Christendom, you’re learning how to get along with people, how to be respectful, how to converse, how to think, how to be thoughtful of others, how to really care for other people. That is something you will take away from Christendom, regardless of your major.”

Project management, according to Zapiain, is the planning, scheduling, and controlling of project activities to achieve quality, cost, and time objectives. To do well, a project manager must be an expert and a diplomat — two characteristics that Zapiain believes he was instilled with at Christendom. 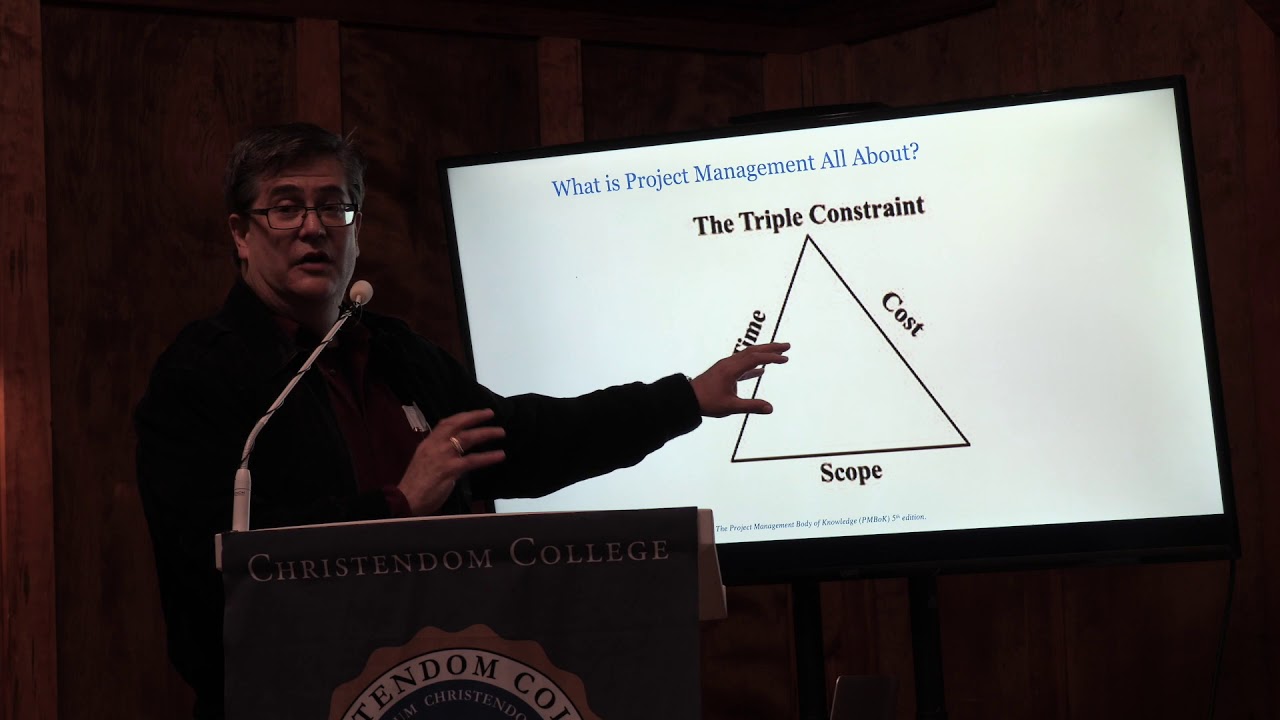 McGraw agreed with Zapiain’s thoughts and added his own story to the conversation, explaining how his education from Christendom, combined with his trust in God, led him to his current role as Senior Configuration Manager for ASM Research, Inc.’s cloud team.

After earning his bachelor’s degree in history from Christendom, McGraw was convinced he was going to be a teacher like Christendom’s founder, Dr. Warren Carroll, and pursued his Master’s in history from George Mason University. His journey took a turn, however, when he returned to Christendom as a staff member, where he would hold a number of jobs, including head of career services, for ten years. As his time at Christendom came to a close, McGraw felt a desire to pursue a career in IT, which eventually led him to his current company, ASM.

His career journey took multiple turns along the way and McGraw had to be fearless in pursuit of what he wanted, a fact that McGraw stressed throughout his section of the talk.

Upon joining ASM, McGraw served as a tech writer before eventually joining the company’s Operations team. Now, he is a part of for the company’s cloud team, proving himself through his hard work and earning his PMP certification — a major indicator of success in project management — along the way.

McGraw encouraged Christendom students to take a chance in their career pursuits and trust in God, relying on their faith and their education in all their pursuits.

“If you’re a motivated person who can be fearless, who is willing to take on adventure projects and be a good communicator, this is something that you can do,” said McGraw. “IT is a great field with so many opportunities.”